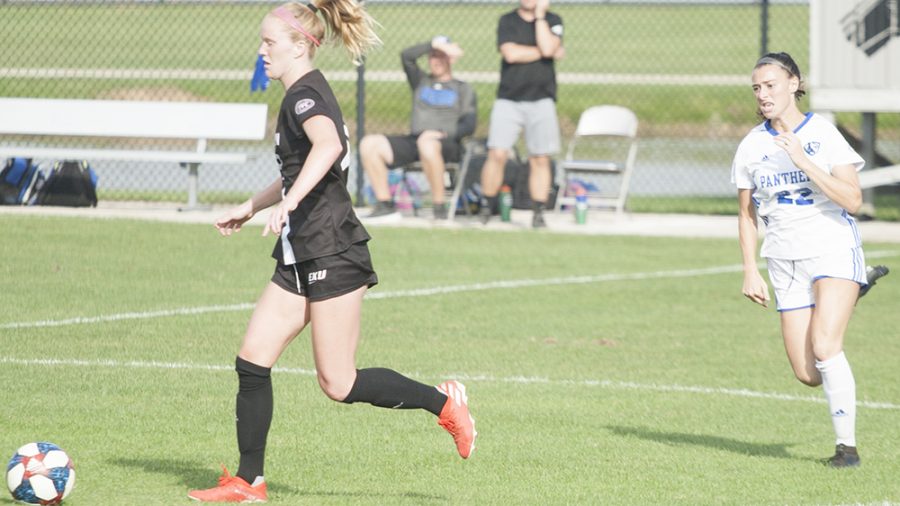 Dillan Schorfheide | The Daily Eastern News Nicoletta Anuci races down an opposing ball handler in the middle of the field. Eastern lost 1-0 Sept. 27 to Eastern Kentucky at Lakeside Field.

The Panthers have gone with different systems of play, different personnel on the field and different strategies to attenuate the strengths of the opponent.

But, as head coach Jake Plant sees it, the women’s soccer team does not suffer from an identity crisis because the team culture is the one facet of the game that never changes.

“The philosophy stays the same,” Plant said. “No matter which system that we implement; it’s just a matter of getting people on the field and using our philosophy. Our philosophy is what sets us aside, not necessarily the formation.”

If the Panthers’ culture has, in fact, been the most reliable component of the team’s fabric, then they will need to find a way of channeling that consistency towards something concrete.

That need to remain relevant in the conference could be fulfilled this weekend, when the Panthers can bridge the divide between their postseason aspirations and their current performance with matches against Jacksonville State Friday  and Morehead State Sunday.

Unfortunately for the Panthers, it is simply impossible to de-couple the results of their conference matches in any discussion pertaining to postseason viability.

Morehead State presents itself as perhaps the most formidable opponent to date, though an argument for Southeast Missouri, who defeated the Panthers late in the first half about two weeks ago, can be made just as easily.

Jacksonville State, though, cannot seem to pull everything together.

The offense has been wounded by defenses that can cut rather deep, losing 1-0 to both Eastern Kentucky and Morehead State, teams with more shutouts in conference games than any other in the OVC.

That said, Jacksonville State lost by five goals to one of the worst defensive teams in the OVC, Southern Illinois Edwardsville, and, despite the 11 shots the Gamecocks took that afternoon, only one of them slipped past the keeper for a goal.

However, freshman Cynthia Bagazzi has exhibited signs of progression throughout her nascent collegiate soccer career as a skilled forward, capable of finding adequate space to launch a generous sum of seven shots per match.

Eastern and Jacksonville State could match up pretty evenly when the offenses are pitted against each other this weekend.

Out of the top 20 players in goals per game, neither Eastern nor Jacksonville State can say they have a player in this elite group.

Freshmen Eva Kiper and Katelyn Setters of Morehead State, on the other hand, are featured prominently in this exclusive goals per game club.

To look strictly at offensive benchmarks, and ignore the potency of a stingy defensive front around goalkeeper Grace Gaffney, would be to underestimate the durability with which this team has operated.

For the season as a whole, Plant has not been hesitant to switch up rotations when the need for such adjustments appears necessary.

Whatever group he decides to go with this weekend, Plant knows he has options.

“I would say out of the 21 girls on the roster, they are all ready to go out there and win a game,” Plant said. “So it’s a case of when somebody comes in and out its usually because their quality suits that type of game more than somebody else, but I think they all, each and every one of them, have a quality that we can use and win a game with.”