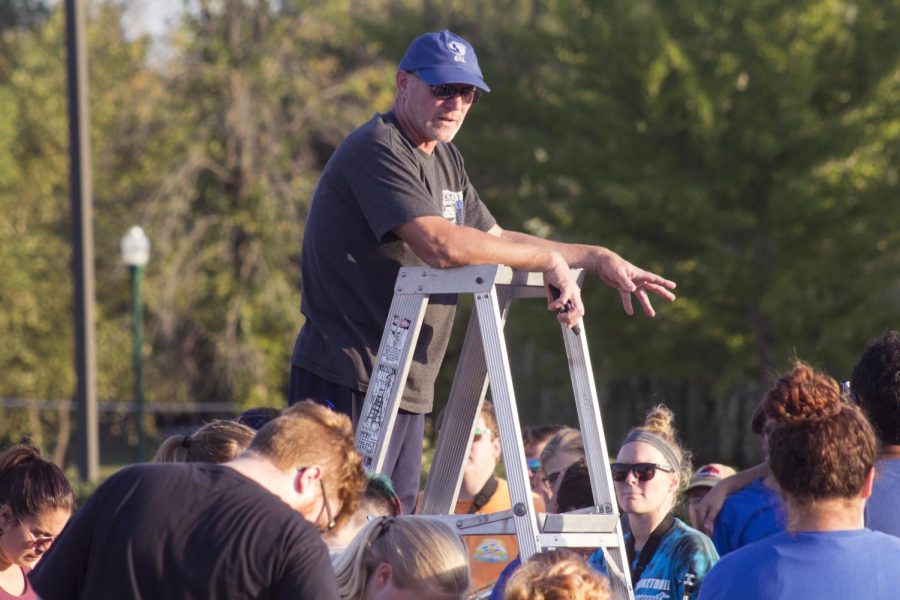 David Boggs, assistant director of bands, adresses the Panther Marching Band after a Sept. 27 rehearsal at the Greek Court parking lot. The PMB Festival will be Saturday, and the first performance is at 9:30 a.m.

Abigail Emmert, senior music education major and drum major for PMB, said about 33 bands are set to perform on the schedule, and the PMB has a performance at the end of each half.

The PMB is performing four “Queen” songs: “Don’t Stop Me Now,” “Bicycle,” “Bohemian Rhapsody” and “We Are the Champions,” Emmert said.

At the very end of the festival, an awards ceremony will be held. Emmert said there are different competitions bands participate in, and the categories for these competitions consider band size and high school size.

Jaida Brockman, junior music education major and drum major for PMB, said the festival is a great place to see a variety of musical talent.

She said she is personally excited to see her alma mater, Mattoon High School, perform at the festival.

It is also satisfying to perform with her alma mater at the same festival because it shows that she is still performing in band.

Brockman said rehearsal time is fast-paced. The PMB typically has about a week to learn each song to prepare for a performance.

After PMB’s Sept. 27 practice, Hope Porter, a sophomore special education major and member of the band’s color guard, said she thought the band was in good shape for the festival.

“Today (Sept. 27) was, I think, a rough rehearsal, but we put the show on the field in two days, so I think the frustrations are there, but overall, I think we’re very happy at where we are at because what we did is quality over quantity,” she said.

She said the PMB’s performances at the festival serve as entertainment for everyone and a recruitment opportunity for prospective Eastern students.

The festival is seen as a recruiting opportunity because high school students see what Eastern’s PMB has to offer, Porter said.

Tickets for the PMB Festival cost $10 for adults and $5 for students and senior citizens; children five years old and younger get in for free.