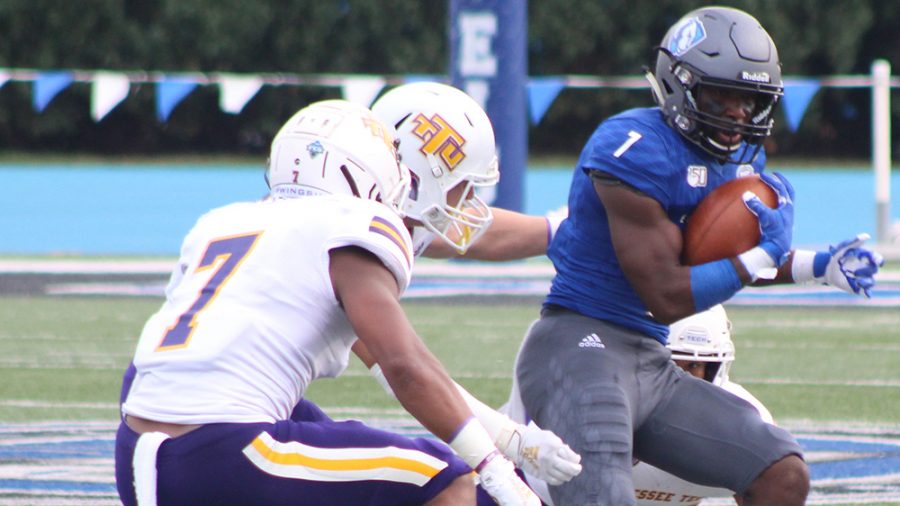 The Eastern football team is still without a win in 2019.

A 40-29 home loss to Tennessee Tech; the team picked to finish last in the OVC, Sept. 28 dropped the Panthers to 0-5 and leaves the team still searching for its first win under head coach Adam Cushing.

Eastern finally had a breakthrough on offense in its week five loss to Tennessee Tech; the Panthers scored their season high in points (29) and put up a season high total in yards (334), but it was still not enough for Eastern to overcome its mistakes in what amounted to another disappointing loss.

The Panthers, however, headed into a week six road game against Murray State, still feel that if they can smooth over those mistakes, which included an interception and fumble in week five, they will finally be able to grab that elusive first win.

Here are three things to watch for in Eastern’s pursuit to get its first win Saturday against Murray State.

Limiting mistakes, particularly turnovers, is going to be key for Eastern if it wants to avoid a sixth straight loss.

As mentioned above, turnovers killed Eastern in its loss to Tennessee Tech and allowed the Golden Eagles to score 14 points in 21 seconds off consecutive turnovers.

Eastern’s 16-6 loss to Indiana State Sept. 14 spelled a similar story, where a couple of untimely turnovers cost Eastern the game.

Cushing said after the loss to Tennessee Tech that his team gave the ball away too many times, and after the Indiana State loss, quarterback Harry Woodbery said the type of interceptions he threw could not happen.

Eastern is aware of the issue and will hope to turn that awareness into action against a weak Murray State defense Saturday.

Murray State, like Tennessee Tech, has a dangerous dual-threat quarterback in Preston Rice.

Eastern said getting pressure on Rice is going to be key to stopping him, like the game plan that was drawn up for Tennessee Tech’s Bailey Fisher.

However, Fisher torched Eastern for a school record six touchdown passes, and you can believe that Eastern certainly hopes to hold Rice to far less production.

“We have to have awareness (of Rice),” Cushing said. “He is a really, really good football player, this conference is full of good football players and particularly good quarterbacks, so I think every week we are going to say, ‘Wow, it’s good we had a really good quarterback to play last week,’ I think that is going to be the reality the rest of the way going in. So I think you always get a chance to build and learn from the mistakes that we made by not making the plays on Bailey that we needed to.”

It’s all up to Woodbery now

Eastern’s two-quarterback system is no more.

Quarterback Johnathan Brantley announced just two days before the Tennessee Tech game that he would be leaving the program immediately, leaving just his counterpart Harry Woodbery as the starter for Eastern.

Woodbery threw for 334 yards, completing 34 passes of a school record 68 attempts, but also threw an interception in the loss to Tennessee Tech.

But headed into Murray State, Woodbery has now had a full week by himself to prepare with the No. 1 offense, something he has not had since coming to Eastern.

Woodbery said the increased reps with the No. 1 offense has been a benefit in Brantley’s absence and added that the offense is feeling an extra boost of confidence after its performance against Tennessee Tech.

“I think it was nice to put some drives together and just kind of show ourselves what we are capable of in terms of finishing drives and getting a team on their toes,” Woodbery said. “Obviously we didn’t win, so we didn’t have them on their toes all game, but we have some really positive things to build on.”

Eastern and Murray State kick off at 1 p.m. Saturday in Murray, Kentucky.