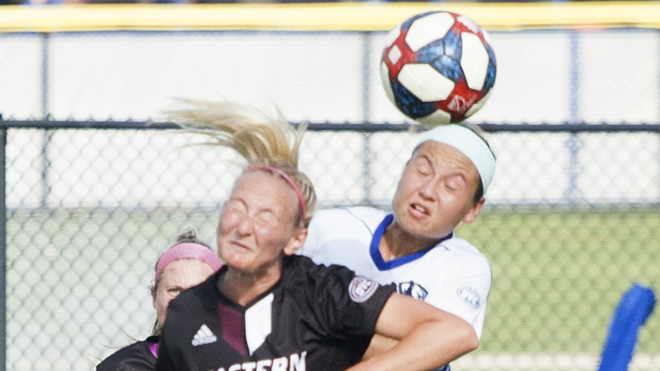 The Eastern women’s soccer team dropped two matches over the weekend, and the Panthers are now one of just three OVC teams without a conference win.

Eastern (1-7-1, 0-3-1 OVC) allowed just two goals in two matches, but the Panthers are now riding a four-game scoreless stretch that kept them in the loss column against Eastern Kentucky Sept. 27 and Belmont Sunday.

On the other side of the field, senior goalkeeper Sara Teteak made 11 saves while facing 36 total shots, 13 of which were on goal.

She was not nominated for OVC Goalkeeper of the Week.

The Eagles look to keep up the defensive prowess as that OVC Goalkeeper of the Week honor went to freshman Kayla Landman, who recorded two shutout wins against Belmont and Fort Wayne, while notching seven total saves.

On top of that, the OVC Defensive Player of the Week award went to the Eagles’ sophomore defender Nicole Palmer, who also registered the game-winning goal against Belmont.

Morehead State (4-6-1, 2-0-1 OVC) remains near the top of the conference standings as the team has yet to lose a game despite being ranked No. 9 in the preseason poll and faces Murray State Friday at 6 p.m. before its date with Eastern.

No. 1 in that preseason poll was Murray State (6-5, 3-0 OVC), which remains perfect in three matches after cleaning up Tennessee-Martin by a 5-1 tally and downing Southeast Missouri in a five-goal shutout.

The offensive explosion has provided five goals in each of the Racers’ three OVC contests, led by OVC Offensive Player of the Week junior Rebecca Kubin who posted three goals over the weekend.

Kubin, senior Miyah Watford and senior Elizabeth Tilton have done most of the heavy lifting in that department, posting 22 combined points while freshman goalkeeper Jasmine Rosell has held down the fort in the net.

The Racers stay on the road after their matchup with Morehead State as Eastern Kentucky plays host to Murray State Sunday at 1 p.m.

Despite its loss to Murray State, Southeast Missouri (5-4, 3-1 OVC) also ranks in the top three in the OVC after splitting the weekend with a 2-1 win over Austin Peay.

Seniors Cassidi Tomsu and Esmie Gonzales headline the offensive attack for the Redhawks as both are on the OVC leader boards with four points a piece.

Southern Illinois-Edwardsville (3-4-3, 1-1-2 OVC) rebounded this weekend, opening with a 2-2 draw with Tennessee Tech on Thursday before downing Jacksonville State in a six-goal rout.

Junior midfielder Andrea Frerker ranks fourth in the OVC in shots per game, averaging three per match, managing one goal and one assist in her efforts.

Junior goalkeeper Jensen Schoch ranks fifth in the conference in save percentage at .889 in conference action.

The Cougars get their week started on Thursday.