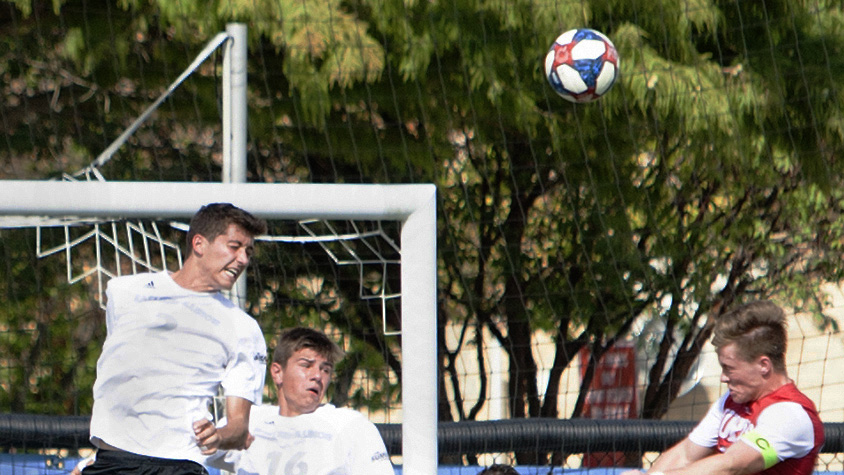 Dillan Schorfheide | The Daily Eastern News Edgar Mesa goes up to head away a corner kick amongst his own teammates and an opposing player. Eastern scored a second-half goal to defeat IUPUI 1-0 Tuesday at Lakeside Field.

Freshmen came up big for the men’s soccer team in a 1-0 win against IUPUI Tuesday on both sides of the field.

On the defensive side it came from freshman Quinn Rechner, and the lone goal from freshman Maxwell Allen was huge for the offense.

In the first half the offensive, tempo was slow on both sides.

IUPUI outshot the Panthers three to one with only one shot on goal for each side. In the second half the Panthers were able to speed up the offensive tempo and create more opportunities.

The Panthers outshot IUPUI eight shots to five in the second half. The Panthers fired six of those shots on goal.

“We don’t make adjustments, but I think we just keep cracking along and keep going,” head coach Kiki Lara said. “I think there is some patience to what we were trying to do and it’s a 90 minute game so with that things open up.”

In the 75th minute, patience paid off for the Panthers when the team capitalized on an opportunity. Redshirt sophomore Cameron Behm assisted a pass by the goalkeeper to Allen on a breakaway goal. The goal was Allen’s first of the season and the first of his Panther career.

“Max trains well every day, and that is the big reason why he’s ready to go in a game like this,” Lara said. “He’s still got a lot of work to do, but at the end of the day he has a real knack for scoring and creating opportunities for himself. Max is also working on really understanding the system, it’s a process and I’m really happy for him.”

On defense, Rechner played the role of the Panthers’ defensive anchor. In the first half, Rechner appeared to have cramps in his legs but yelled at Coach Lara that he was good to play.

Despite discomfort, Rechner willed his way to get to every ball that came close to him and seized control of his area on defense. In the last 20 seconds of the game, Rechner secured the win for the Panthers when he sped from the right side of the field to the left side to clear the ball on defense to help shut out IUPUI.

“Quinn is a warrior, and it doesn’t matter if he’s a freshman or not,” Lara said. “That kind of mentality we need, and that is a big reason why we got the shutout today.”

“We love playing at home in front of our fans and our administration,” Lara said. “We love to represent EIU here at home, and the guys take pride in defending our place. For us, it’s really great when we come out here and believe we and feel like we can win a game at home; it’s been done several times, and we have a recipe for that.”

The Panthers will play their second conference match of the season Saturday at home against Oral Roberts. The game will begin at 3 p.m. at Lakeside Field.