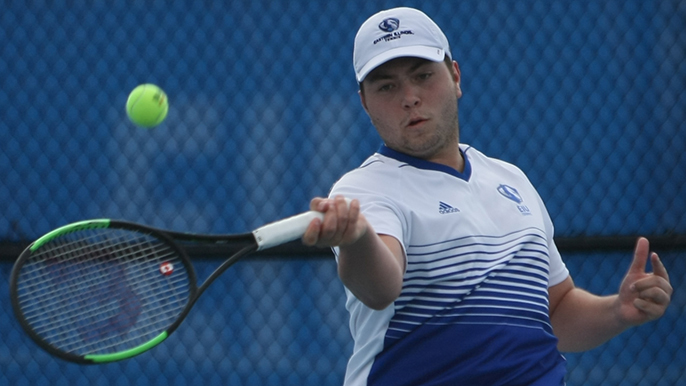 File Photo | The Daily Eastern News Gage Kingsmith returns a hit with a forehand strike of his own. Eastern lost to Jacksonville State 6-1 at the Darling Courts in March.

When Gage Kingsmith comes to mind, the first thing that stands out is his bubbly personality and his upbeat attitude.

Kingsmith stuck with the Eastern men’s tennis program all three years, as he enters year four for his senior season. He has been a part of a core consisting of seniors Braden Davis and Freddie O’Brien, along with junior Logan Charbonneau throughout his time in Panther blue.

He resides in Calgary, Alberta, Canada, which results in a 27-hour drive, or a little over a 3-hour plane ride to Chicago, Illinois.

Now, it may seem odd that Kingsmith never had a family member influence him to play tennis; in fact, it was his best friend when he was eight years old.

That friend happens to be Josh Peck, who plays for the University of North Carolina.

Kingsmith said he might be the start of family members following in his footsteps, like his 11-year-old sister who also plays tennis in Canada.

Since that time, Kingsmith enjoyed what tennis offered him and began revving up his practice workload and making himself better.

Former director of tennis Sam Kercheval recruited Kingsmith to Eastern, and Kingsmith mentioned Kercheval was great with communicating with him, which helped him make an easier decision, while also liking the team at that certain time.

He had three other schools scouting him: Niagara University, East Carolina University and Longwood University.

When he reached 14 or 15 years old, Kingsmith realized he was good enough to compete and win tournaments in Canada. Fast-forward a couple years later, Kingsmith’s goal was to play in the U.S., and that dream came true.

Kingsmith said there were some factors that played a role into why he wanted to jump ship to the U.S.

“Atmosphere and the importance of athletics in the U.S. is not even close compared to Canada,” he said. “We have teams here and everyone is cheering for EIU here and would never be able to find that back at home, and the level here is just way higher, so if you want to play good tennis, you have to come here.”

While in Canada, Kingsmith was planning ahead. He was finding 50 schools that he liked and what would be a good tennis level for him.

His main objective was contacting coaches from different schools to see what they could provide and offer him, but the immediate response from Kercheval really stood out for Kingsmith, which ultimately landed him in Charleston.

A big part in that is Kingsmith getting the opportunity to play the minute he stepped foot on the courts, playing in singles and doubles matches at a mid-range school like Eastern.

Kingsmith noticed that in the U.S., people can be a little more aggressive than Canadian people, and in America, everything comes at you quick.

But, one thing that Kingsmith adapted to was the amount of practicing and conditioning, after getting acclimated to just an hour or two of practice then 30 minutes of conditioning back in Canada and knowing the team is willing to work all the time.

He has been a part of two eras, meaning two different coaching styles from Kercheval to new head coach Chris Tolson.

“Our confidence as a team now is way higher than when I came my freshman year,” Kingsmith said. “I’m not sure how we cultivated this culture, but Sam was teaching us all discipline and hold each other accountable and holding yourself and your teammates responsible for their actions.”

Kingsmith said he noticed a difference between Kercheval and Tolson.

Kingsmith said: “When coach Chris came in, he had a killer attitude. He was not going to accept us playing poorly against a team we should’ve beat. If there’s a team we should beat, we we’re going to beat them. From last year and him explaining the importance of playing to win, and not just to play, we had a lot of fun.”

Transitioning to a different culture, there are others on the team that are from different countries, and Kingsmith loves having that at his fingertips.

“I am just so grateful to come and have this experience,” he said. “I’m pretty sure there is not many places where you can go and come and you get to meet people from Brazil, Germany, Netherlands, Belgium, England. Just to be able to hangout all together on the court, off the court, you can experience all these amazing different cultures, and it was always nice knowing you had someone in the same boat as you.”

Coming in, Kingsmith did not know anyone, and he knew he had to meet all new people and one of those happened to be Freddie O’Brien.

“The first day of international orientation day, Sam (Kercheval) said, ‘Hey, your roommate is Freddie,’ I looked him up to see what he looked like, and I went to the (Martin Luther King Jr. University Union) and saw this guy who happened to look like him, and it was him and the rest is history. He’s been my best buddy and roommate for four years; it’s been incredible,” Kingsmith said.

If Kingsmith did not go the tennis route, he would have focused on his major of finance and pursue that, but he stated he would not change anything and could not imagine himself doing something else.

As mentioned before, Kingsmith is a friendly individual, and something that changed him was always being nice to his teammates and having that enthusiasm.

Kingsmith said if he was not nice to the teammates from the get-go, he would have never had the relationships he has now, rather than showing up to practice, leaving, then sitting in his room.

Reflecting on this time here at Eastern, Kingsmith does not want it to end.

Junior Logan Charbonneau has been a teammate of Kingsmith’s for two seasons now, and the vibe he brings anywhere he goes is contagious.

“Gage has always been someone that can set the mood of the team,” Charbonneau said. “If he’s energetic, then other guys want to be too. He finishes each practice with a wrap up before we break it down and is always there to help push the guys. He has one of the strongest voices on the team, and there’s no denying that.”

Charbonneau closed it out by saying how Kingsmith is a vital part of the team’s success.

“One of the things his personality does is allow the team to be loose around him,” he said. “Which is needed in times when things get stressful and players start getting tight. It’s weird when he’s not around and it definitely affects the time, and I think when that’s the case it’s obvious how important that person is to the team.”

For Tolson, knowing Kingsmith for just one year, he has nothing but praise.

“When I first met Gage, he is the guy that will loosen everyone up by cracking a joke or making other smile and laugh,” Tolson said. “It’s very important in a long season to not get down on yourself or the team and Gage has always had a positive outlook since meeting him. Gage is also very talented, especially in doubles and I see him being able to bring a lot of energy to every match, getting a bunch of wins and help us compete for a Conference Championship this year.”