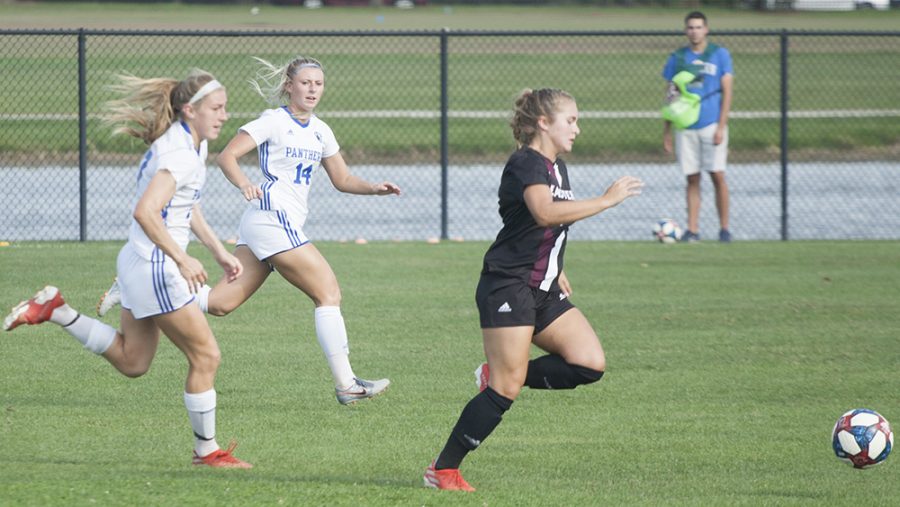 In the team’s most recent non-conference matchup, the Panthers went down 1-0 in the first half to Chicago State, a team that has won just one match in the past three seasons, but came back to win 3-1 after some quick offense.

After the game, Eastern head coach Jake Plant said the play itself wasn’t much different between the first and second half, but the end result of the scoring opportunities changed.

After Friday’s 1-0 home loss to Eastern Kentucky, in which the Panthers went down after a fourth-minute goal, Plant harkened back to that contest and said he told his team the same message after the first period.

“It was literally the same conversation at halftime,” Plant said. “It’s ‘Keep doing what you’re doing, it will come’ because sometimes it’s like it appears that we’re not necessarily in a good half, but there are some things that we know will win us a game are happening.”

Record-wise, Eastern may not appear to be living up to the OVC preseason No. 5 ranking the team received, but the wins and statistics don’t paint the complete picture.

The team features a bend-not-break type of defense anchored by senior goalkeeper Sara Teteak, who allowed just three goals and recorded 37 saves in about the last 450 minutes of game time. She also leads the conference with 9.25 saves per game against OVC competition.

The method is fine, the execution is fine, but the results just are not coming yet.

The team’s style is really no different from last season, in which the team finished with a high seed in the OVC tournament, and the biggest threat to replicating that progress would be for the team to put too much stock in the final result of the matches.

Eastern gets to dig into five straight home matches, three of which coming against bottom-four preseason ranked teams in the OVC, with the chance to prove that last season’s success was no farce.

For reference, through four OVC matches last season, the team allowed four goals and came away with a 2-1-1 record while scoring just three goals themselves.

It’s hard to imagine that the 2018 squad is truly leaps and bounds better than this season’s, and as long as the team reminds itself of that, then the results will come.

If you want to argue that there is a fundamental issue with Eastern’s style and make up, that is fine, but when you are on your soapbox, remember that it did not stop Eastern last year; there is no reason that it should this year either.

There needs to be urgency from the Panthers moving forward, but staying patient and playing within the direction of the team can still yield familiar success.