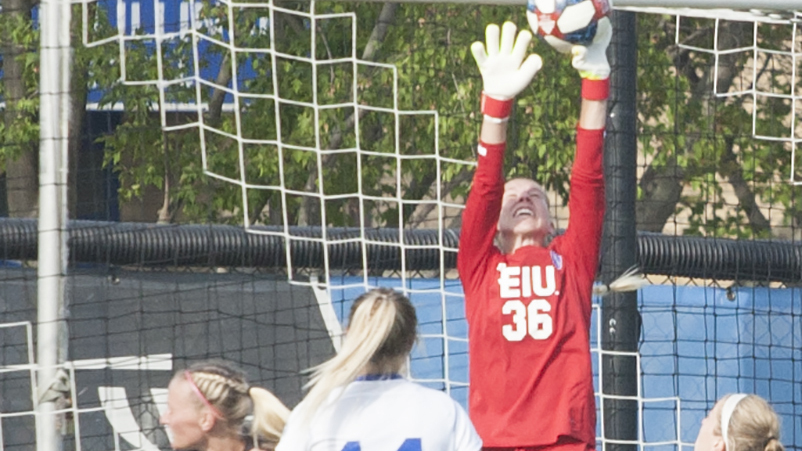 Dillan Schorfheide | The Daily Eastern News Sara Teteak rises up in front of the goal to bat away a crossed ball. Eastern lost 1-0 to Eastern Kentucky Sept. 27 at Lakeide Field.

Eastern Kentucky junior Sarah Owusu pounded a low shot into the back of the net just four minutes after the match had begun, converting her first point this season for the Colonels.

Sunday, in the wake of a 1-0 loss to Eastern Kentucky Sept. 27, there were parallels in a 1-0 loss to Belmont, as senior Anna Hawkins scored a goal four minutes into the second overtime.

The Belmont match remained competitive for the better part of two halves for the Panthers, again losing by a point after the Eastern defense compromised the whims of the opposing forwards, who were forced to settle for one point on 26 shots.

With the losses to Eastern Kentucky and Belmont, four of the six matches played have come down to one goal.

Eastern head coach Jake Plant posits that his team so often does all the right things, but one small lapse will mean all the difference. He told the team at halftime of the Eastern Kentucky match to replicate their first half endeavors in the second.

“Sometimes it appears that we are not necessarily having a good half, but some of the things that we know will win us a game are happening,” Plant said. “It was just to keep pushing and keep pushing. It just didn’t come for us today.”

The first loss could be chalked up to the Panthers being more of a second-half team, but the one to Belmont could very well remind them of how small the margin of error has been for the majority of matches this season.

With the exception of one first half goal in a 5-2 loss to Milwaukee earlier this season, followed up by the 1-0 overtime loss at Belmont, each Eastern point has materialized in the second half.

Of the 17 goals allowed by the Panthers, just shy of 25 percent of them took effect in the opening 20 minutes of the match.

The Panthers matched or exceeded the opposing team’s scoring output in the second halves in over 50 percent of the matches played to this point in the season, even while the Eastern record is 1-7-1 overall and 0-4 in conference.

Nevertheless, opposing defenses have humbled the Panther offense regardless of the half, consistent with the fact that Eastern ranks last, tied with Jacksonville State, for the fewest goals in conference play and the second-worst average in the regular season as a whole.

It did not help that two starters, Eva Munoz and Lindsey Carlson, endured injuries not long after the half began.

Audrey Anderson kicked Lindsey Carlson in the face on an attempt at the ball, which warranted a yellow card and left Carlson sidelined for the remainder of the game.

Plant did not know the nature of the injury she suffered, but he did not believe it would force her to miss any additional playing time. Eva Munoz returned later in the half.

Carlson would, as Plant predicted, be healthy enough to play in the Belmont match.

Even with all his personnel available; however, opportunities in front of the net were scarce.

After the Bruins badgered senior Sara Teteak with nine shots in the first 45 minutes of the match, Eastern could not manage to stymie the Belmont attack in the second half either, when they redoubled their bids to take the lead, delivering 10 more potential chances at moving up on the Panthers.

Six shots were taken in the second overtime, all of them by way of Belmont’s forwards and midfielders, with Hawkins guiding the Bruins to a climax off an assist from senior Niki Clements.