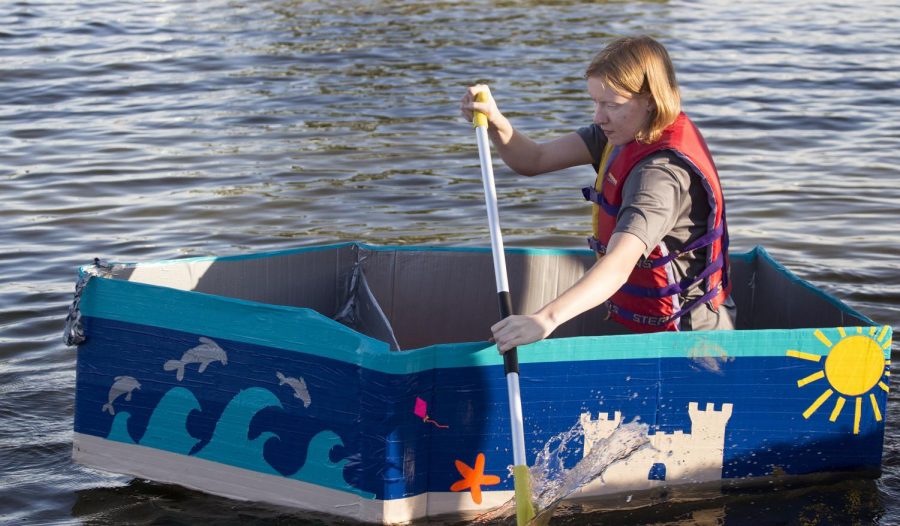 Many of the other competing halls boats sank before the first lap was over and the student in the boats had to swim across with their boats.

Lawson Hall, one of the first boats to sink, sank while Nico Tapia, a freshman hospitality major, was getting into the boat.

“Well the boat sucked, so automatically I drowned,” Tapia said. “I couldn’t even go ten feet without drowning.”

Tapia said despite the boat sinking and cutting his toe he had a good time.

A resident assistant from Lawson Hall, Christian Walls, came to support his hall.

“As an R.A. in Lawson, seeing my residents come together and make a boat out of cardboard and duct tape is amazing,” Walls said. “Watching them stay up until one o’clock in the morning? Amazing. Amazing to watch, I loved it.”

Mikkelson was not originally supposed to compete in the race as a paddler.

“I needed to sub in for someone, I was originally going to be a pusher but I was like ‘alright, I guess I’ll take my shot at rowing,’” Mikkelson said.

Mikkelson said he was confident in their chances of winning from the beginning.

“The other halls, they were thinking they were going to win, but I saw our team and I was like ‘I know we’re going to win this,’” Mikkelson said. “#transferstudentsarethebest.”

“It was fun, but I didn’t realize how much physical shape you had to be in. I’m really out of breath right now,” Shelby said. “I had a great time. Thomas Hall, best hall.”

Shelby said going across the pond was difficult.

“(Going across the pond) I felt like I was dying. The boat is a lot heavier than you think it is,” Shelby said.

Shelby said the worst part of the race for her was when she got to the middle of the pond.

“(The worst is when) you’re right in the middle of the pond and you can’t just stand up and start walking,” Shelby said.

Shelby said the best part of the race was competing against other halls on campus.

Shelby said she enjoyed helping create the boat she competed in.

“I think it was pretty good, I didn’t fall into the water,” Sego said.

Sego said she felt even better about the boat her hall, Lincoln Hall, made.

Some of the competing boats didn’t make it across the pond intact.

Sego said the best part of competing was making the boat, but it was also the hardest.

“It brought our whole hall together,” Sego said. “There were a lot of late nights.”