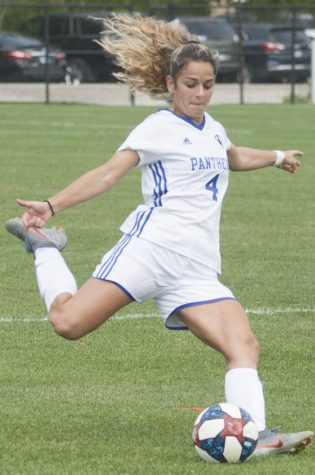 It was a mixed bag of a weekend for the Eastern women’s soccer team.

On the other hand, senior goalkeeper Sara Teteak recorded 26 saves, including a 16-save shutout of Tennessee-Martin (3-3-4, 1-0-1 OVC) en route to a tie, despite the Skyhawks being ranked second in the conference preseason poll.

Eastern suffered four non-conference losses to start the season to teams that are now a combined 25-7-4, so the competition was tough, but the problem was Eastern lost two of those matches by three goals or more.

These past two matches for Eastern came against opponents that finished 2018 with a combined 20-11-6 record, yet the team held both squads to a combined one goal and nearly clutched out a victory over the Skyhawks in double overtime with scoring chances from freshman Nicoletta Anuci.

Both matches are a bit of an enigma in terms of the box score and the eye test.

Sure, the team came away from the weekend with a goose egg in the win column and allowed 27 shots on goal, but again, Teteak deterred all but one of those opportunities and subsided one of the strongest squads in the conference.

It is not a wash of a weekend, though, as there were clear positives and negatives that individually need to be addressed, but ultimately, it could be a good jumping off point for the start of conference action.

For example, as well as Teteak played, if she has to continue to shoulder the load like she did this weekend, there is no guarantee she will be able to stop as many shots as she did if the pressure continues at this pace.

That being said, if the team can lean on the strong play of Teteak, then the team can settle in with the ball and start harnessing some scoring urgency early in matches.

Perhaps it was not a ceremonious start to conference play for the Panthers, but the positives could be conducive of a big step forward this season.

The women’s soccer team’s next match is a home conference contest.