Book sale held outside of Booth 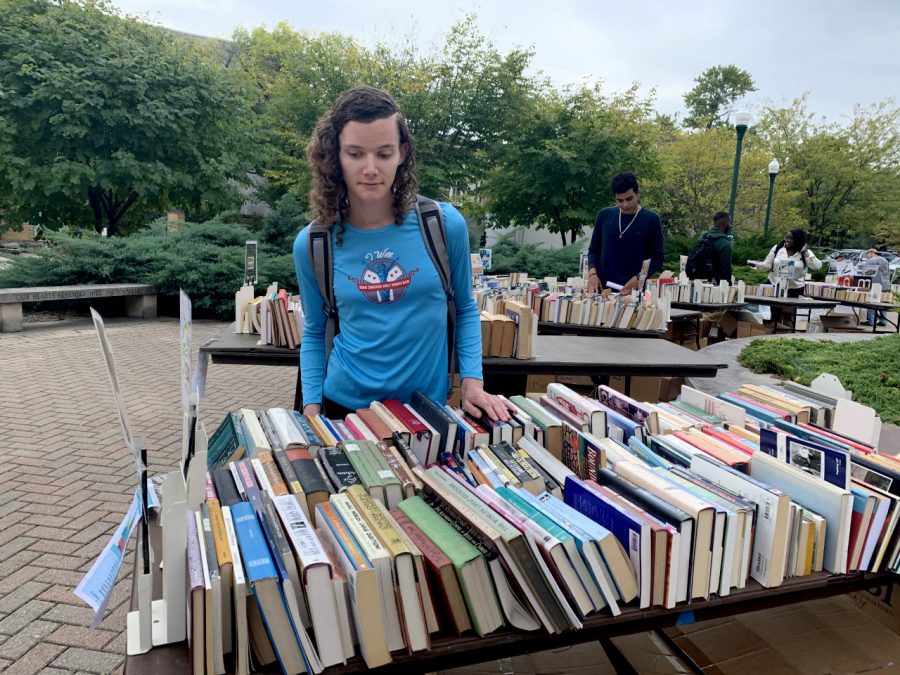 Danielle Lindblad, a graduate student studying exercise science looks through the religious section. Lindblad was trying to find a Koran but was unable to find one but continued to look through the books to see what she can find.

People sifted through the variety of books available for purchase at the Alumni Association Clock Tower on the north side of Booth Library Wednesday for the annual fall book sale.

The sale was an opportunity for students to purchase books that had been donated to the library and for the library to earn money for service improvements.

Several students mentioned that the organization of the books was helpful for finding what they wanted to read.

Maria Angel, a sophomore double majoring in biology with pre-optometry and Spanish, said the organization system led to her finding just what she was looking for.

“I think it’s interesting how it’s separated topic by topic,” Angel said. “For example, I was just thinking about how I don’t know a lot about religion, and I would like to get close to it, and then I just saw religion as a topic.”

Jackson Melvin, a sophomore history major, said the organization helped him as well compared to the sales he attended in the past.

“I went to both of them last year,” Melvin said. “I would say this one is about the same, if not a little better. I’ve found more of what I want faster.”

The students also thought the book sale prices were affordable and a good value for both the quality and quantity of books they could get.

Angel said she was already planning to purchase books on topics she was interested in and was glad to find them cheaper at the book sale.

“I was actually thinking about going to buy some medical books and ones on religion and I like knowing that it’s not as expensive here as it would be somewhere else,” Angel said.

Melvin said the prices made the books more enticing.

“Yeah, I like (the book sale) a lot actually,” Melvin said. “It’s about the best value you can get for especially this number of books.”

Landon Ghast, a graduate English student said that the prices were good if one can find the right books.

“Honestly, with some of these books there’s a reason they’re so cheap, but there’s some gems,” Ghast said.

While Booth hosts a book sale twice each academic year, some students were caught off guard by the sale Wednesday.

Angel said she found out about the sale after she spent some time studying.

“I honestly didn’t know there was a book sale, but I was in the library and I just walked out and saw it,” Angel said.

Ghast said he was just walking back from class when he saw what was going on.

“I didn’t know it was today, I was just walking by the library and I was like ‘Oh,’” he said.

Melvin said the sale was good for finding books on all of the topics he was interested in.

“I was just looking for history books, religion, philosophy (and) just general literature,” Melvin said. “I found some good ones.”