‘Soccer on the Quad’ held for Latino Heritage Month 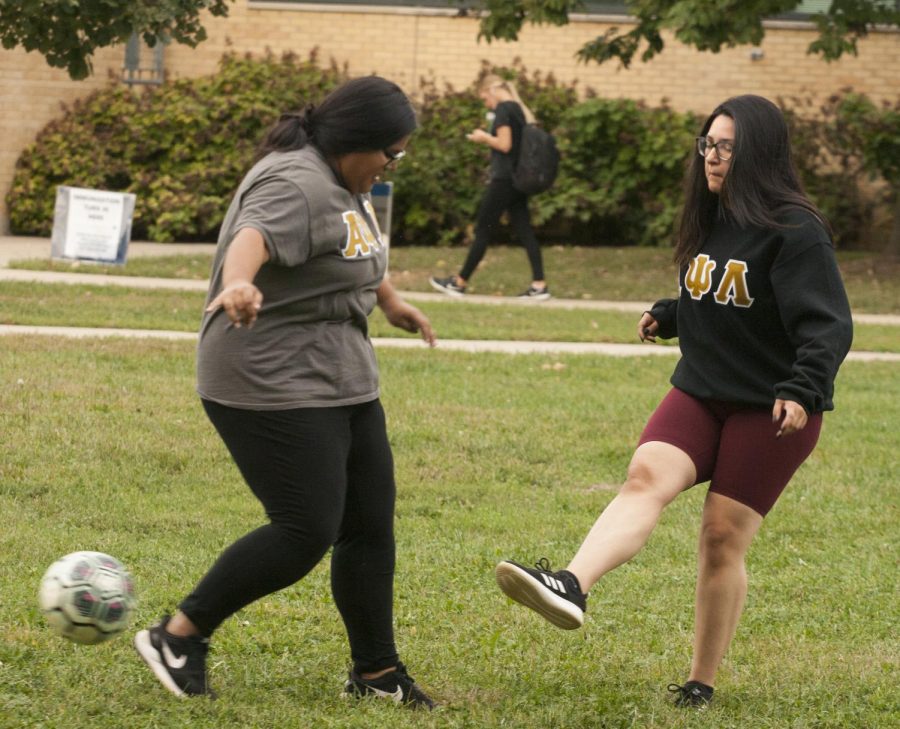 Jennifer Escobedo, a junior majoring in nursing, and Isela Diaz, a senior English major: creative and professional writing, play soccer during the “Soccer On the Quad” event for Latino Heritage Month.

Students gathered on the South Quad to play soccer Tuesday afternoon as part of Eastern’s recognition of Latino Heritage Month.

Blake Meadows, a senior biology major, said she and the rest of the students who attended the game arranged the idea as a group in honor of Latino Heritage Month.

Meadows said students should attend Latino Heritage Month events on campus in order to learn more about Hispanic culture and the various aspects of it.

“There’s not that many Hispanic students on campus, so sometimes they feel like they’re not represented here,” Meadows said.

Meadows said it’s important to attend these events to grow one’s understanding of Hispanic culture and help them feel valued and represented on campus.

Another student who attended the soccer game was Daniela Munoz, a sophomore fashion merchandising and design major.

Munoz said she felt like attending events for Latino Heritage Month gives students the opportunity to get a better look at Hispanic culture in general and at Eastern.

“(Students) can get more insight and background on what the Latino and Hispanic culture has to offer,” she said.

Munoz said students of every culture and race could benefit from learning about Hispanic culture.

She said that she felt that Hispanic representation on Eastern’s campus is lacking.

Munoz said Latino Heritage Month events give students who are not familiar with Hispanic history or culture the opportunity to learn more about something that they otherwise wouldn’t have been exposed to.

Lisette Perez, a senior with a major in hospitality, agreed that representation on Eastern’s campus is relatively low and many students could stand to spend some time learning about the culture.

“Getting (students) involved and immersing them into something that they normally don’t see on an everyday basis … is just a good opportunity for everyone to be involved as one and to understand the Latino culture,” Perez said.

Perez said it is beneficial to learn about cultures different from your own.

Munoz said there are a lot of things individuals can learn about Latino history.

Upcoming events for Latino Heritage month include “What makes us feel Latinx: Student Panel” in the Martinsville room of the Martin Luther King Jr. Student Union from 6 p.m. to 7 p.m. on Thursday, and a two part event called “Why do we migrate?”on September 30 and October 2.

Part one will be a documentary in the Arcola/Tuscola room of the Union from 5 p.m. to 6:30 p.m.