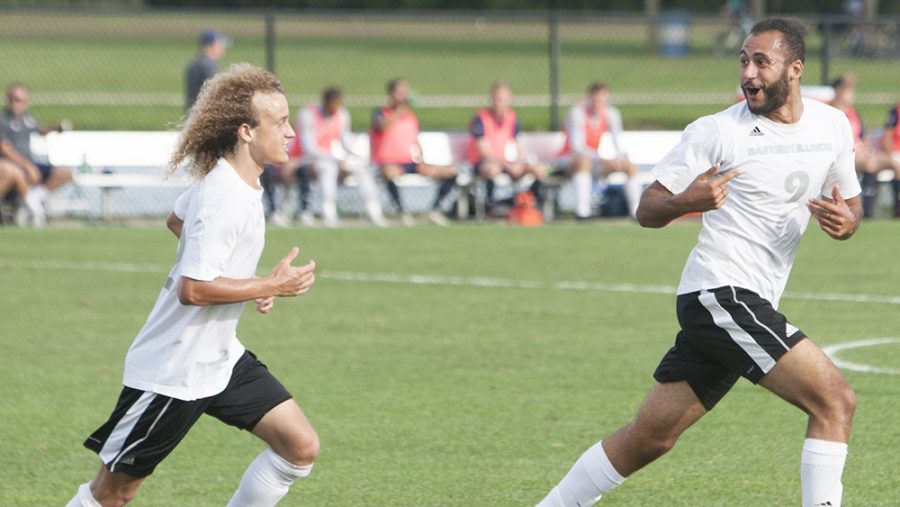 The men’s soccer team trailed early, but clawed its way back for a 3-2 overtime win to stay undefeated at Lakeside Field.

In the first half, shots were scarce by both sides. Belmont made redshirt junior goalkeeper Jonathan Burke work early, giving him three saves for their four total shots. The Panthers shot two times on goal in the first half.

In the second half, the Panthers struck first in the 50th minute when sophomore Chad Hamler directed a corner kick into the box that senior Edgar Mesa headed into the back of the net to give the Panthers a 1-0 lead.

Belmont quickly countered, scoring the tying goal with a quick shot off a scramble to even the score at 1-1. In the 61st minute, Belmont’s Corey Lavinder rebounded the ball off a Burke punch-save and scored to give Belmont a 2-1 lead.

The Panthers then began their comeback with the defensive anchorage of Mesa and the help of junior Jonas Castelhano off the bench in the midfield making the little things happen.

Castelhano challenged every ball that came his way in the midfield and connected passes on the offensive side of the field.

On defense, Mesa seemed to imprint the game every time Belmont attacked, but he kept his composure throughout the game.

“Both of them stepped up and played big roles,” head coach Kiki Lara said. “Jonas came off the bench, played two ways and opened up the game offensively. Mesa is a guy that we know if we need to come up big on a save, him and Burke will be there. He’s another guy that stepped up in a game that we really needed him to.”

In the 64th minute, the Panther offense opened up when junior Shady Omar shot from the top of the goal box and the ball sailed into the net to tie the game at 2-2. That goal was Omar’s second goal of the 2019 season.

“The game is 90 minutes, so we just kept doing the same things that were almost working in the first half,” Coach Lara said. “We stayed to the process and we stayed to our system and over the course of 90 minutes the game started to open up.”

In overtime, in the 95th minute, senior Cole Harkrader delivered the ball from the midfield to redshirt senior Christian Sosnowski on the right wing. Sosnowski then delivered the cross to junior Davi Girardi, who scored a one-touch goal to give the Panthers the win.

“The biggest thing for me is anytime you can come back from a deficit and be resilient then that is a big win for us,” Lara said.

With the goals from Mesa and Girardi, the Panthers now have eight players who have scored a goal in 2019. Coach Lara believes that the players, whether they play 90 minutes, 20 minutes or zero, all have the capability and preparation to come in and play a big role in any game.

The men’s soccer team will carry their third win into their conference opener Saturday. The Panthers will play on the road against Summit League rival Denver at 2 p.m.