Women’s tennis plays at home, away in Milwaukee 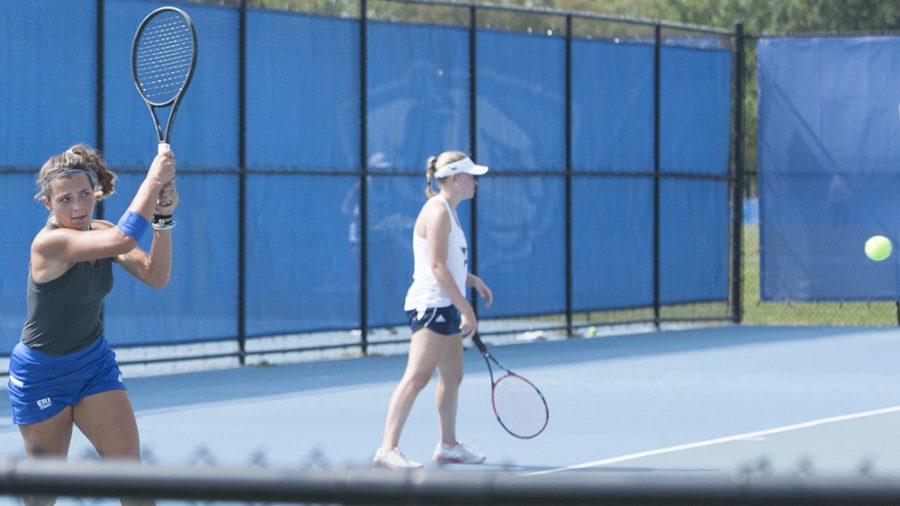 Dillan Schorfheide | The Daily Eastern News Claire Perez-Korinko completes her forehand follow through to return a hit. She finished the Eastern Illinois Fall Invite with three wins at the Darling Courts Sept. 20 and 21.

The women’s tennis team hosted the Eastern Illinois Fall Invite over the weekend, and Kaitlyn Snyder, a freshman, believes the team did well overall.

“I think I was a little tired this weekend, so my mentality could have been a little better,” Snyder said.

The team played against Southern Indiana and Western Illinois.

Lauren Ellis, another of the many freshmen on the team, and Bukraba-Ulanova teamed up in doubles and won three more matches.

“I was very pleased with how Liza and I did in doubles, winning all four matches,” Ellis said. “And in singles I got a good win over a girl I played multiple times throughout high school, so it was a successful weekend.”

Ellis continued: “Our team did really well. We had wins from everyone all throughout all of the brackets. I hope to improve on my ability to minimize unforced errors and to be able to hold my momentum and focus when I have it.”

Kaitlyn Synder, a freshman, believes that the team improved from the first match.

“My favorite part of the match was playing at our home courts and having my teammates be there alone the sides. It is fun to host other teams and represent your school on the home court,” she said. “I think we did improve because a lot of are new and now that we have played a couple matches then this tournament, we knew more of what was going on.”

In addition to the fall invite, select players from the women’s tennis team were sent to play at the ITA Milwaukee Tennis Classic.

Freshman Christine Gouws and junior Rachel Papavasilopoulos were the Panthers who represented Eastern at the classic.

Gouws lost her opening singles match, as did Papavasilopoulos. In the consolation bracket, both players advanced to the round of eight.

Both, however, did not advance further, as they both lost in the round of eight in straight sets.

After hosting the Fall Invite, Ellis believes that the team’s best quality is its support amongst its players.

“This weekend we had people at three different tournaments, so in our group chat we were all constantly updating one another,” Ellis said. “And within our tournament at EIU, everyone is cheering each other on, especially our upperclassmen. Our team is so close, it is a big family, so support is our strongest quality.”