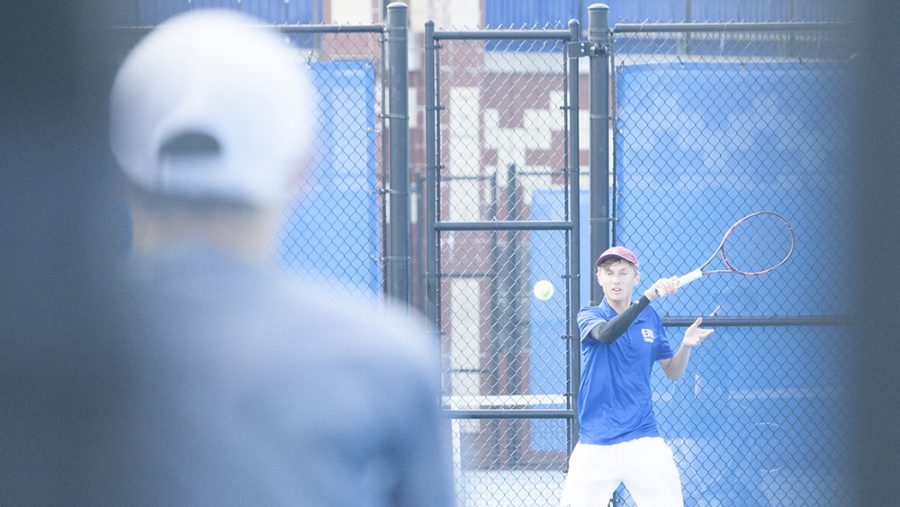 Dillan Schorfheide | The Daily Eastern News Max Pilipovic-Kljajic returns the ball to his opponents’ side of the court with a forehand hit. He competed in flight 1 for the men’s singles matches in the Eastern Illinois Fall Invite Sept. 20 and 21 at the Darling Courts.

The Eastern men’s tennis team had another busy weekend on its hands, hosting the Eastern Illinois Fall Invite, while also competing in the Toledo Men’s Rocket Invite.

The Panthers are displaying that dominance the team had a year ago, as senior Freddie O’Brien and junior Mike Jansen both earned All-Tournament team honors.

O’Brien notched 15 wins at the No. 1 singles position last year, and he’s not slowing down, topping Cole Shoults of Toldeo 6-3, 3-6, 10-3 in singles action, while also teaming up with senior Gage Kingsmith in doubles play, securing a 2-1 record.

At Darling Courts, the results are also worth noting.

However, in doubles action it was the opposite results.

Lewis University won flights 1 and 2 for the doubles title, while relishing off singles titles for flight 1 and 2, and Southern Indiana rounded it out, claiming flights 3 and 4.

Last season, Jansen dealt with a nagging wrist injury that kept him out of action on two separate occasions, but now that’s in the rearview mirror, and he’s feeling great.

“Better than last year,” Jansen said. “Feeling a lot stronger and ready for this season and the first tournament went well. Played some good matches and felt stronger on court than last year. Team got bigger, more quality and most of us are working hard to get better every day. Feels great being able to compete without any health issues and just go full send.”

“Nothing special,” he said. “Didn’t play very well, but just tried the best possible. I think I was mentally stronger than some of my opponents at some important points.

The Panthers will stay put this weekend, as they host their annual alumni match at the Darling Courts Saturday at 10 a.m.