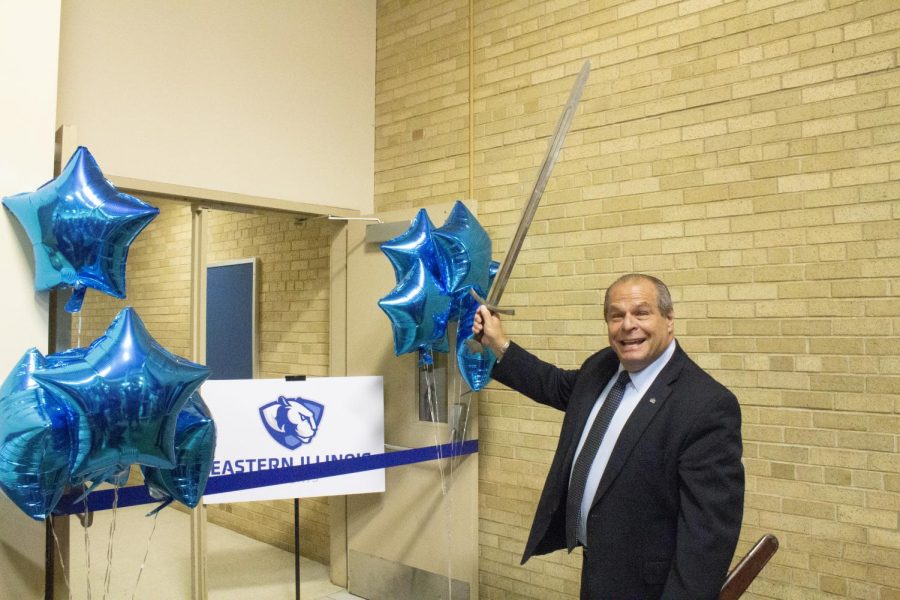 Eastern President David Glassman is ready to cut the ribbon with a sword for the new eSports arena in Lantz Arena. The arena will host video game tournaments and teams.

Theo Laleian was nervous as he walked up the stairs in the Student Recreation Center.

The senior computer information technology major was about to show a crowd of administrators, faculty, students and his friends his “baby,” or the new eSports Arena.

“I’m definitely a lot happier than I was a couple days ago because now people are excited for it,” Laleian said. “They haven’t seen the room, which is making me nervous, but I think once that is done then I’ll feel a lot better about the experience.”

It took less than six months to make the arena possible, and Monday marked the day it was revealed to the campus community.

The arena, in room 2710 of the Rec, was part of a $60,000 budget and is equipped with gaming monitors, mice, keyboards and headsets where students will be able to play games like “League of Legends” or “Apex Legends.”

There are also gaming consoles such as a PlayStation 4, Xbox One and Nintendo Switch where students can play games like “Super Smash Bros.,” “NHL 20,” “Madden NFL 20” or “NBA 2K20.” There are also two TVs and furniture throughout the room.

Laleian helped make this arena possible because as Josh Norman, the associate vice president for enrollment management, said, Laleian was the “passionate advocate” he needed to “throw the gas on the fire.”

When the arena was in the works, Laleian also helped start a new eSports registered student organization. Laleian is the president of the RSO and Bobby Rodriguez, a senior computer information technology major, is the vice president.

Rodriguez, following behind Laleian, said he did not think building the arena would happen “this fast.” And Laleian said, as he approached the hallway leading to the arena, that he hoped everyone in attendance would be accepting and excited just as he was.

After Eastern’s President David Glassman cut the ribbon outside the hallway leading to the arena with a sword, people made their way to the room.

When the members of the eSports RSO, all wearing T-shirts that represented their team, walked into the arena they cheered, clapped, laughed and said things like “Oh my God,” “Woah,” “Wow,” “We’re all professional gamers now, guys” and of course “Welcome home, guys.”

This was the first time any of the members (except for Laleian and Rodriguez) saw the arena and after a quick celebration they sat down at a computer and started playing.

“This is new for everybody, only we’ve seen this,” Laleian said smiling and looking around at all the members and everyone else who trickled into the room before making his way to a computer at the far end of the room to play “League of Legends.”

McCormack, who along with Grant and Laleian is a leader in bringing the arena to campus, said at first he was nervous too but after people saw what took months to plan, that nervousness grew into excitement.

“(At first) I was like, ‘Are people going to really show up?’” McCormack said. “But plenty of people showed up. We got a great response from club members. I couldn’t have imagined this happening like six months ago…now it’s happening.”

Grant said it was “pretty amazing” to see what used to be an old meeting room turn into what it is now in a matter of six months.

“I worked here 12 years now and was a student here before that, and to be able to see the progress that was done, I think it speaks a lot to how important people saw this as a project,” Grant said.

He said everybody from the students who said that they wanted to be here to the faculty who said they needed to see what they could do to try to get involved and participate and all the way up to the administration who found the money to make this happen saw how important the project was.

He also mentioned the people in facilities, who were pretty short staffed, made this a priority for students.

“So to be able to go from a meeting room to a space for students to be able to not only game and play recreationally but also to meet up and be able to socialize in a space collectively, that’s something unique,” Grant said.

Aside from being something just for students, Grant and Norman said what makes the arena also unique is the connection between student affairs and academic affairs.

In other words, Grant said as a faculty member he is interested in what is going to be able to help the student succeed.

“We know if they have a community of people to be able to surround themselves with and something that they feel like they can let off some steam or participate in, that is the key to be able to get them to stay here and enjoy the time they have here,” Grant said. “So being able to provide this is a piece to that puzzle….”

Sarah Daugherty, the interim director of campus recreation, said the arena will be free to use by anyone with a Rec membership.

Daugherty said the arena will be open whenever the Rec Center is open, however people will not be able to use the arena during certain hours because the eSports RSO will be practicing during that time.

Those hours are from 6 to 8 p.m. Monday through Wednesday.

But this week will be open play during all hours and there will also be tournaments including a “Super Smash Bros.” tournament on Friday that anyone can attend.

The eSports RSO members will be having a tournament of their own on Tuesday against members at Bradley University.

As people started to play games and others left to go on with their day, Laleian sat at a computer surrounded by his friends and teammates and he “gamed.”