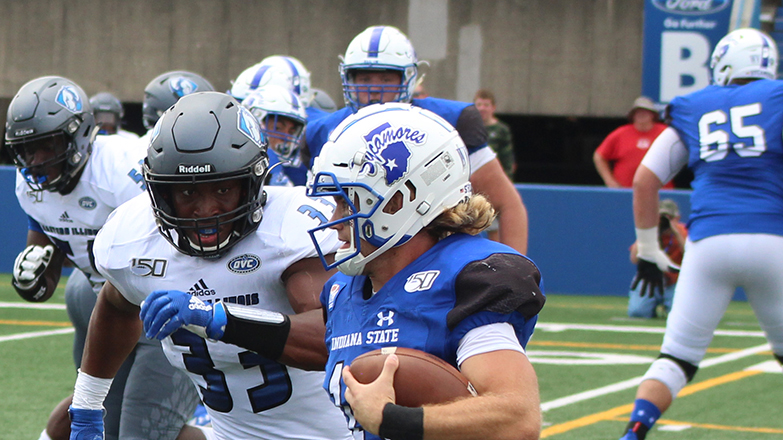 TERRE HAUTE, Ind. — The Eastern football team scored just 19 points in four games this season. It scored just six points in a 16-6 loss to Indiana State Saturday in yet another anemic showing by an offensive unit desperate for a fix.

Head coach Adam Cushing felt the offense started to find a rhythm in the second half, during which Eastern scored its only touchdown, but said the offense really shot itself in the foot with the turnovers.

“We just beat ourselves,” Cushing said. “I give our kids credit because we battled, we had seen some momentum to our sideline and then we were just out there beating ourselves. And we have said it from day one, you can’t beat two teams in the same day. So, when you beat yourself, you will not beat the other team.”

The moment of the game that defined Eastern beating itself came with 14:48 to play in the game.

Eastern trailed Indiana State 13-6 and was pushing the ball down the field looking to tie the game. But quarterback Harry Woodbery fired a ball into double coverage that was intercepted by Indiana State at the 37-yard line.

The Sycamores turned that turnover into a field goal and made the game a two-score affair.

Woodbery said all the responsibility for that turnover fell on him.

“I kind of stepped a little to the right in the pocket, I had some guys crashing in, I stepped to the right and I have got to get to the next read on that play for a touchdown,” Woodbery said. “I think I was just getting a little greedy, I wanted to make a play for my team, but obviously I can’t do that, you saw what happened. Just have to stick with the reads and play within the offense and not try to do too much.”

Woodbery finished the game 8-for-22 passing with two interceptions, as he relieved Johnathan Brantley at quarterback in the second quarter. Brantley was 4-for-7 with one interception.

Eastern’s offensive performance on Saturday was just another iteration of what has been a season of severe struggles moving the ball and scoring for the Panthers.

The Panthers after four games rank last in just about every statistical category in the Ohio Valley Conference, and the numbers are not particularly close.

The Panthers are last in points scored, averaging just 4.8 points per game; the next closest team is Tennessee-Martin which is scoring 18.7 ppg. Eastern is last in completion percentage (45.1 percent), last in passing yards per game (115).

“It starts with us as coaches, we have got to coach them better,” Cushing said. “We have to put them in positions to succeed, we have got to give them tools to not beat themselves on both sides of the football and then we’ll come out with the result.”

“To win football games consistently you have to be good on both sides of the football up front and certainly we have to do jobs to help,” Cushing said. “We have young guys playing out there and we have inexperienced guys, so we have to do a better job as coaches in giving them tools to be successful. Yeah, they have to execute at a high-level in order to win but it has to start with us as coaches to give them a plan that they can execute, that they can win their one-on-one matchups consistently, that’s what it comes down to.”

The Sycamores’ touchdown came on a 69-yard touchdown pass from Kurt Wilderman to Rontrez Morgan with 33 seconds to play in the first quarter. After that however, the Eastern defense buckled down and limited Indiana State to just two field goals, including a couple of red zone stops against the Sycamores.

“Coach Cushing harps on us a lot about playing the next play, I think that was the thing,” Eastern defensive lineman Austin Johnson said. “Even with that pass play they had along ur sideline, nobody was there to cover him, we could have easily put our heads down and said ‘oh my gosh they’re on the goal line, but instead we decided, ‘You know what, it happened, and we can’t do anything about it so let’s play the next one.”

Austin Johnson finished with a game-high 13 tackles, three for loss.

Eastern’s defense, outside of giving up 52 points to Indiana in week two, has had three very strong showings; Saturday was no different.

In the three games outside Indiana, the Panthers defense has given up 24, 21 and now 16 points. That three-game average of 20 points per game allowed would be second in the OVC.

“The mindset every time we touch the field is do our job,” safety Raymond Crittenden said. “Coach (Chris) Bowers installed that in us, just everyday do our job, play physical and play together and that’s the mindset we have.”