Around the world people are participating in Climate Strike 2019, including people in Charleston. 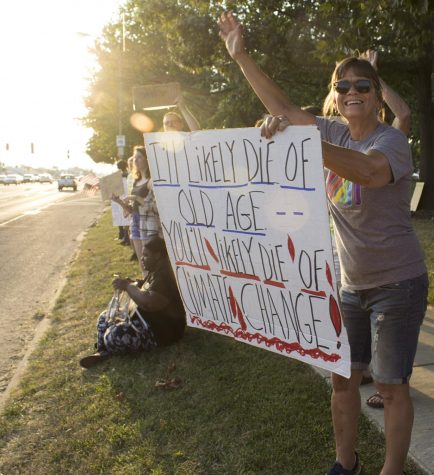 Corryn BrockShelley Epperson of Mattoon waves to passing cars on Lincoln Avenue while participating in a rally against climate change Friday evening at Morton Park.

David Frye, Earth Wise vice president and senior physical geography major, said he was surprised by the number of people in attendance.

“I feel really good. I had no idea how many people to expect, but it was definitely more than I thought,” Frye said.

“It’s happening all over so we wanted to get that here too because it’s really big,” Martinez said. “We’re trying to get environmental awareness.”

Members of the Charleston and Mattoon communities as well as Eastern students came together with different personal reasons to rally, but all for the same cause.

Mitzi Morales, a junior elementary education major, said she was excited to see a rally was being held so close to campus.

“I was upset I was going to be missing the Climate Strike, and then I started looking into it and I found there was a location here so I was excited to come out and support something I believe in,” Morales said. “It affects all of us. Someone’s sign said ‘If you breathe, you should care,’ like it doesn’t affect one certain group of people, it affects everyone.”

Cristina Colin, a senior psychology major, said she felt it was important that she attend the rally to express her concerns.

Shelley Epperson of Mattoon said she came to the rally for people younger than her.

C.C. Wharram, director for the center of humanities and chair of Faculty Senate, attended the rally with his son and said they came because they felt strongly about protesting climate change.

“This is the most important thing in the world, I think it was Greta Thunberg who said, ‘Act as if your house is on fire because it really is,’” Wharram said. “We want to protest because we want to show people we care about climate change.”

Morales said she hoped the rally brought people together on common ground.

Some people who attended offered solutions on how people can do things in their daily lives to combat climate change.

Epperson said she felt change could not be made by solely by individuals and that people had to come together for actual change to happen.

“There’s not enough being done on an individual level. I quit using plastic bags and that’s great that anyone would do that, but we need group action, massive group action, to even hold the line where we’re at right now. I don’t think we can turn the clock back at all, but we can hold the line on it and we need everybody to buy in on that,” Epperson said.

Wharram said he thought some solutions to climate change were obvious.

“The solutions are not that complicated; we have a lot of the technologies already. I saw a couple of signs about solarizing Illinois, I mean the solar technology that exists right now is cheaper than other technology that we would want to invest in to start up,” Wharram said.

Frye said individuals should do their part, but real change falls on corporations.

“Day-to-day there are things we can do, but climate change, when you talk about the big picture, it’s corporations who are doing most of the damage to the planet,” Frye said.

The strike was put together by Earth Wise, Coles County Progressives and Charleston Huddle.