What to watch for in Eastern vs. Indiana State 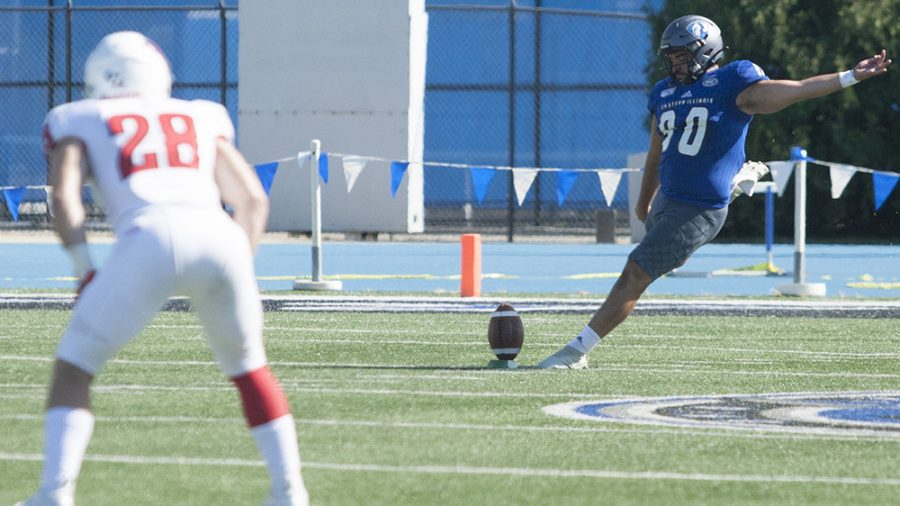 Karina Delgado | The Daily Eastern News Josh Delgado gears his leg back as he prepares to boot the ball during a kickoff. Eastern lost 21-3 to Illinois State Sept. 14 at O’Brien Field.

The Sycamores parted ways with head coach Mike Sanford after the season, and a rebuilding process appeared to be beginning in Terre Haute.

Indiana State hired head coach Curt Mallory following the season to guide them through the transition.

Normally, taking a winless program in college football back to relevancy, especially in a conference as tough as the Missouri Valley, takes multiple years.

But Indiana State decided to burn that script and in Mallory’s first season at the helm, the Sycamores went 7-4, a seven-game improvement from the year before.

Talk about a quick transition.

The Eastern football team finds itself in a similar transitional situation. The Panthers went 3-8 in 2018 and moved on from head coach Kim Dameron, later hiring Adam Cushing as his replacement.

Eastern and Cushing have looked at what Indiana State was able to do and believe they can transition like Indiana State did and want to do it faster.

“Yeah absolutely (we have looked at what they did), and in fact, we want it sooner,” Cushing said. “We really believe it can be sooner, we believe that we’re a man away on every play. You know we just have to have 11 guys doing their job, so we believe that it’s coming this weekend, we believe that tomorrow is the best (day). If we just continue that progression, then we are going to be on the upward trend.”

The Panthers will get to test just how much like Indiana State they can be Saturday when they go head-to-head with the Sycamores on the road.

Regardless of where each team has been on a transitional timeline, these two teams are no strangers to close games.

In 2017, the Panthers went to Terre Haute and narrowly escaped with a 22-20 last-second win. Last season Indiana State snuffed out a late Eastern comeback attempt and beat the Panthers 55-41 in Charleston.

There is as much familiarity between these two teams as there is similarity in the state of the programs the last two years.

“They’re really good,” Cushing said of Indiana State. “They’re well-coached, I know coach Mallory, he is a great football coach, got a lot of things in common with them. The first guy I coached for at Northwestern played for Coach Mallory’s Dad, so we have a common history, a lot of common philosophy. They’re well-coached, it jumps off the video right away and what he has done, because I have known him, I followed since he has been there, I have really seen him do a nice job with the program and you can tell when you turn on the video that they play the game the right way.”

Eastern believes its offense is coming along

Eastern’s offense has struggled this season.

It is not a secret and it is something that both coaches and players have acknowledged. The Panthers have just 13 points in three games, and after the team’s week three loss to Illinois State, in which they scored just three points, quarterback Johnathan Brantley said the offense had to get better and they did not have a choice not to.

Cushing is confident it is getting better and said he has seen progress already this week.

“The results are going to come if we just continue to get one day better,” Cushing said. “Obviously, we know that we are playing against good football teams, we know we have to have a high level of execution on Saturdays.”

Cushing redelivered the message that has under toned every game the Panthers have played this season: The team is focused on themselves, not the opponent.

Part of the Panthers’ focus, on looking the mirror rather than across the field, has been on getting the offense to work as a unit of 11 players executing consistently, rather than just 10 at a time with one player getting beat.

Cushing often said this season that when the offense is getting beat or under-performing, it is because one player has been getting beat on offense which throws off the whole play.

The key to fixing this, Cushing said, was watching film and just having a basic level of trust between the guys on the field.

“Absolutely, the great part about is that (the team) they turned on the video and went, ‘Oh there’s 10 guys doing a great job and there is that one guy not,’” Cushing said. “And that one guy that is not, it wasn’t like boy that guy just flat beat him, it was just he would have been the next kid isn’t doing his fundamentals and techniques.”

Cushing continued: “The great part is we don’t have to invent something magical; we’re not coming out in a brand-new offense, we’re not all of the sudden going to be wishbone triple-option or anything crazy like that. We’re just going to do what we do and we’re going to do it better and I think the guys see how close we are and just that little taste, that understanding how close we are gets them excited for it.”

Eastern’s defense will be tasked with shutting down a game-changing running back for the third week in a row. This time it is Indiana State’s Petson Kerlegrand, who currently leads the MVFC with 360 yards rushing.

Cushing said that Kerlegrand brings a different skill set to the field than James Robinson from Illinois State and Stevie Scott but said the key to stopping him remains the same, proper tackling.