Greer the ferocious, Greer the quiet: A look at Eastern’s captain 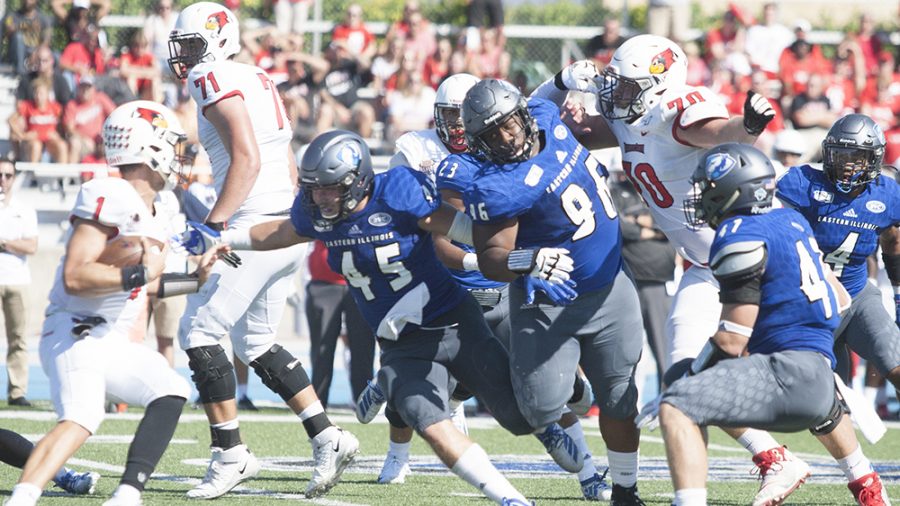 When Eastern’s senior defensive tackle Terrell Greer lines up against an opposing offensive lineman, at first glance, the relatively under-sized Greer appears to be at a disadvantage.

Greer is listed at 5-foot-10 (although he probably stands a little shorter) and 310 pounds, small for a lineman, especially when compared to offensive guards or tackles.

But when the ball is snapped, it becomes very clear it is not Greer who is at a disadvantage, it is whatever poor soul lined up against him.

At the hike of the ball, all 310 pounds of Greer compacted into that short frame, goes barreling into the offensive line with the type of strength and agility that is not just impressive for someone of his size, but for any football player in general.

It is then, when Greer is tossing aside a lineman or smashing into a running back in the backfield, that it becomes very clear why he was named to the preseason all-conference team and why Eastern head coach Adam Cushing said Greer has been consistently the best player on the football team.

Greer this season, in three games, has eight tackles, two for loss, serving as the anchor in what is seemingly a rejuvenated Panthers’ defense from a season ago.

“I think I have been playing very well, decent,” Greer said. “Trying to get better at pass rushing and you know still continue to be real effective in run blocking. I still have to improve on pass rushing but I am getting there.”

Greer is described as somewhat quiet, but it is evident there is a lot of confidence in that quietness.

The play on the field does the speaking for Greer, so there is really no need for him to do any talking beyond that. Still, his teammates have taken note of what Greer can do on the football field and named him a team captain because of it.

“He is a reserved guy, if you talk to him, you’re like, ‘Oh he is kind of quiet,’ but if you get to know him, he is opened up to the guys he likes and he is a funny dude. He is actually pretty funny, he is a jokester,” said defensive line coach Deonte Gibson. “But him being a captain, the guys follow his lead. When he is ready to go, they’re ready to go, when he is ready to kid around, they are ready too.”

Off the field the quiet jokester is well liked by his teammates and coaches, but on the field that reserved personality turns into a force to be reckoned with.

Greer is tough, both physically and mentally, and he is confident he can beat his opponent. Last season, when the whole defense struggled with confidence issues, Greer stayed on course.

“Nah me personally, not to sound cocky or anything, but I don’t deal with confidence problems,” Greer said. “I always believe I am going to be the best person out there, but that is just a personal thing for me to be the best out there and make sure the next man going against me is going to respect me after that game. That’s my mindset every time I play.”

Greer’s mindset has bred him into a player known around the program for toughness.

He has played in all 11 of the team’s games the past three seasons and is unbothered by the “nicks and bruises” that come with playing football 11 games every season.

To illustrate better what nicks and bruises might mean to Greer, when asked if those “nicks and bruises” were something that might cause another player to miss time, Greer laughed and said “possibly.”

“When I get on that football field it’s game time, I don’t think about no injury, it’s time to ball. So that’s all that matters, all those injuries go away,” Greer said.

Gibson described Greer as “relentless,” and Cushing said he brings “maximum effort every time he is on the field and maximum physicality.”

Cushing added that there were not enough superlatives to describe what Greer brings to the football field.

“Unbelievable (toughness), unbelievable,” Cushing said of Greer. “Football is a game for tough guys, it really is, and you can find a way to not get in or you can find a way to be in and Terrell finds a way to be in. We’re never going to put him in harm’s way, we’re never going to allow him to risk himself, but when he might be a little bit sore, he doesn’t allow it to get into his head and he truly has control over his mind. Which allows him to focus on the moment and play.”

Gibson had similar thoughts: “He is relentless, he takes coaching really well and he is a veteran guy and is one of the guys with the most experience, not just in the d-line room, but on the entire team. So, he has seen what it takes to win at this level and what it takes to be successful. He attacks the day, he gets pushed pretty heavily and he doesn’t waiver.”

While Greer may be smaller than the offensive linemen trying to block him, it does not take very many plays before his opponents realize they are dealing with a lot more than meets the eye.

It all comes back to that confident mindset Greer possesses; he does not want to get beat on any play and does not think he will.

“He has the mental toughness and the heart to beat the guy, he doesn’t care how big the guy is across from him, that doesn’t even enter his mind,” Cushing said. “His mind is 100 percent on, ‘I am going to win my one-on-one matchup.’ Period, end of story. He doesn’t care and that is the sign of a good football player.”

What is interesting about Greer is where his motivation and consistent confidence comes from: Just a love for what he considers a game.

“It’s a game at the end of the day,” Greer said. “So if you need motivation for a game then you obviously shouldn’t be playing it so that’s the only thing that keeps me going is playing a game that is just fun. So that’s why I play football, it’s fun.”