3 things to takeaway from Eastern’s loss to Illinois State 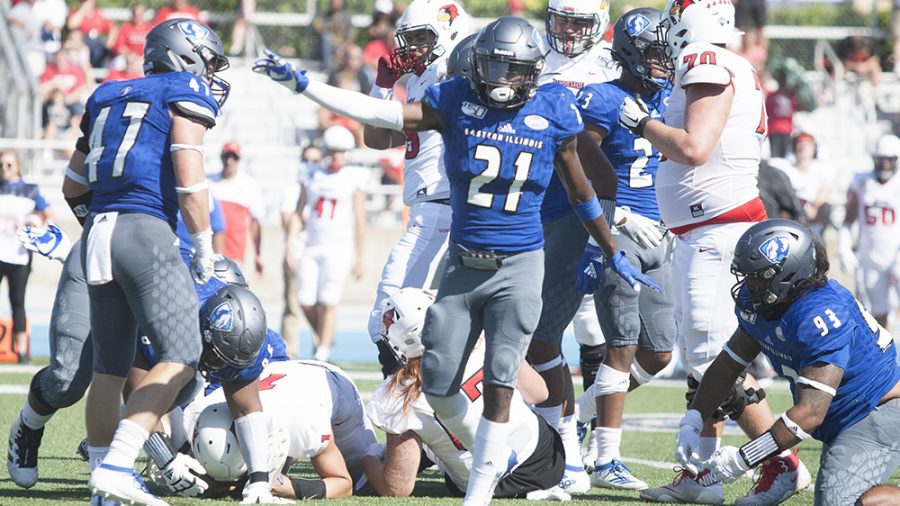 In 2018 the Eastern football team’s offense is what carried the team through a 3-8 slog of a season, pulling along a defensive unit that ranked second-to-last in the OVC in nearly every statistical category. The offense during that time ranked second in almost every category.

In 2019, however, it appears as though the offense and defense have switched roles from a year ago and it will now be the defense that will carry Eastern through games.

In three games this season, the offense, which was ever so dazzling a year ago, has scored just 13 points, including just three in the team’s most recent loss to Illinois State.

The defense on the other hand, outside of a clunker against Indiana of the Big 10 conference, has been very good thus far. It allowed just 24 points to Chattanooga and 21 to Illinois State, and while those may not be wildly impressive numbers, it is important to keep in mind that the opposing offenses this season have been dealing with very short field situations.

But, if you did not follow the team last season, it is hard to stress just how different of an offensive and defensive relationship this is when compared to last season.

More often than not it would be Eastern’s offense that would score 40 or more points in a game, only to be let down by the defense, which would give up even more. Now it is the offense not pulling its weight. When the defense held opponents to 24 and 21 points in games this season, the offense scored just 10 points and three points in those games.

Granted the offense is a much different unit than it was a season ago, it is replacing nine of 11 starters including five on the offensive line; it is still shocking to see this kind of night and day change from a unit that was so successful a season ago.

Linebacker Dytarious Johnson was a wrecking machine in the backfield, finishing the game with nine tackle, three for loss and one sack.

Defensive tackle Terrell Greer had yet another stellar showing on Saturday, the all-conference lineman had five tackles, two for loss, and combined with defensive end Charlie Brooks for a sack. Head coach Adam Cushing said that Greer has been consistently the best football player on the team this season.

Defensive linemen James Ubaike, D’Mitri George and linebacker Joe Caputo, each had half a tackle for a loss as well.

It was another strong showing for the defense overall, but it was the linemen and linebackers, who really stood out on Saturday.

Cushing sticks with one quarterback (mostly)

For over a year now the two have both been listed as the starters at the position and have been sharing time there. However, on Saturday it was Brantley who played all but the one series.

Brantley finished the game with 106 yards rushing but 10-of-27 passing for 79 yards. Woodbery attempted just one pass which was incomplete.

When asked after the game if Saturday was an indication that Brantley would be the main guy moving forward Cushing kept to the status quo and said the quarterback decision was one that they were taking day-by-day and week-by-week and added the reason he did not pull Brantley for Woodbery was because of how hard Brantley was playing.

The offensive line is still very much a work in progress

Eastern has five new starters on its offensive line from a year ago, three of them are freshman. The youth of the unit has showed this season and it was very prevalent on Saturday when they allowed eight total sacks.

Cushing cited protection issues as one of the reasons the offense struggled on Saturday.