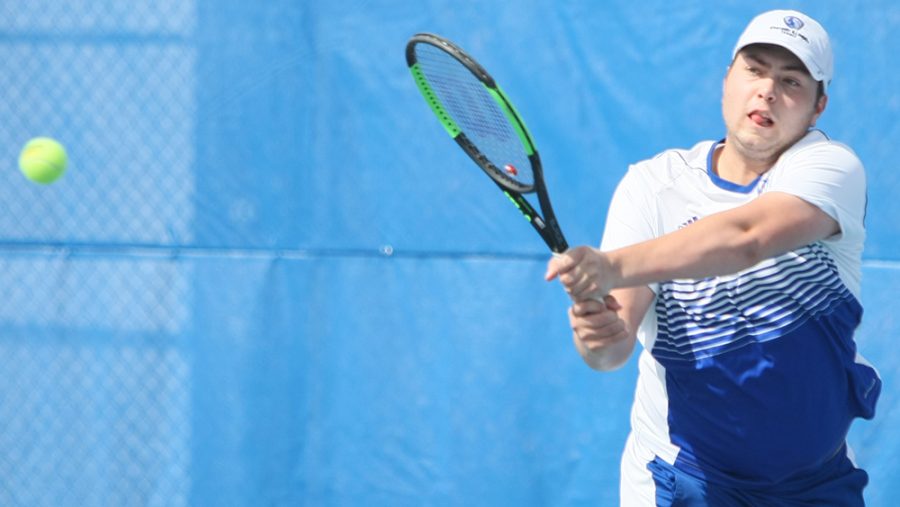 File Photo | The Daily Eastern News Gage Kingsmith returns a hit with a backhand strike of his own. Eastern lost to Jacksonville State 6-1 in March at the Darling Courts.

The men’s tennis team welcomed eight freshmen to the roster, and the team’s core from last season is still intact.

Eastern had a tremendous season last year, notching 14 wins, which is the most since 1995, and the team won its first Ohio Valley Conference tournament match since 2004.

The focus is now gearing up for the new fall schedule that the Panthers kickstarted with two invites: The Olivet Nazarene Fall Invite and the Chattanooga Clay Court Collegiate Championships.

Eastern split its players for both matches in what director of tennis Chris Tolson said is to help players get prepared for the spring season.

One of those newcomers is Cameron Slabbert, who had an impressive showing, advancing to the finals in the men’s singles draw.

He won his opening match 6-1, 6-4 over Nadrian Fiesta of Olivet Nazarene.

Slabbert squared up against his own teammate, Thomas Wallace, but Slabbert had the upper hand, 3-6-6-4, 10-8 in three sets before taking down Tigers’ Andres Martinez in the semifinals. Slabbert eventually lost in the championship match 6-4, 6-3 to Francisco Faria of Olivet Nazarene.

Wallace also had a good day, taking the win in his opening match over Andy Fang of Illinois Tech 3-6, 6-3, 10-8 before topping Andrew Torres of Illinois Tech to make the match against Slabbert.

As for the Chattanooga Clay Courts Invite, four Panthers men’s players made up the roster for Eastern.

Junior Daniel Hernandez started things off on the right foot, winning his first match 6-3, 6-1 over Nikolai Manchev of the University of Alabama at Birmingham.

But Hernandez could not muster much more, dropping his second match in the second round, before climbing back and winning one consolation match over Christopher Tasker of Troy.

Two other freshmen who played for Eastern were Pau Riera and Christos Kyrillou who both came out victorious in the consolation bracket.

On top of that, Hernandez and Kyrillou capped off a win with their match in doubles play by a 8-6 score.

For Tolson, these fall invites provide a lot of insight in what he has within his team.

“Our focus this fall is to play events with better players and teams,” he said. “Right now, we are looking for our players to learn how to compete and learn from set to set and match to match. I am happy with what I saw from the guys. Each player has technical things to work on before the next event. But from watching them play, two things come to mind: We have a group of guys who fight and a great culture.”

For returning players like junior Logan Charbonneau, he is also pleased with what the team can provide.

“The new guys just killed it out there at both tournaments this weekend,” Charbonneau said. “This was a smaller tournament, so it’s a good way to get the jitters out if they had any and I think that definitely worked out based on how they played.”

While it is too early to come to conclusions, senior Gertjan De Wilder’s outlook on himself and the team is positive.

“Some people say the fall is easier and not as hard than spring, but it’s actually not true,” he said. “We have tennis practice, weights, and 6 a.m. conditioning which makes it hard. I can’t really tell yet what the fall season does to my game since it just started, but I’m 100 percent sure everyone in our team will be fit and ready to go in the spring.”