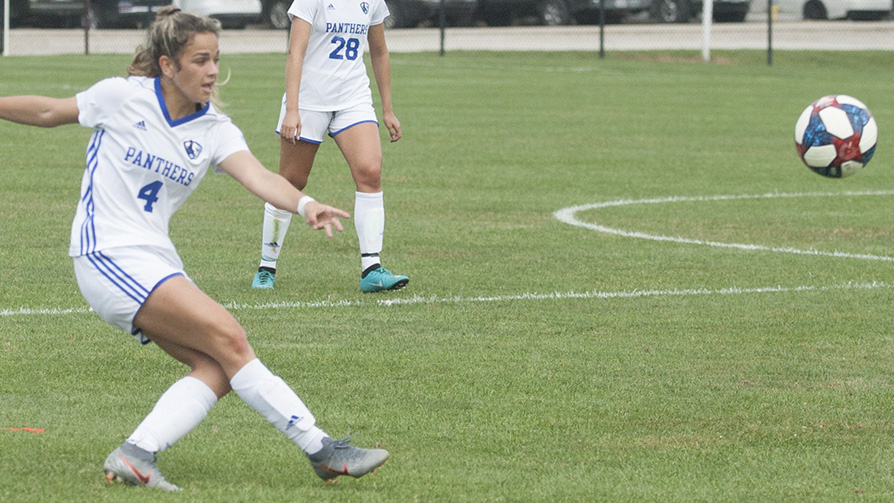 The conditions were right. A confluence of factors, namely the 84-degree heat and a reliable Eastern attack after halftime, delivered the Panthers’ first victory.

The beating the Chicago State players took from the sun, however, could not compare to the one they took in the second half from the Panthers’ forwards, with goals from Nicoletta Anuci, Sara DeWolf and Lexi Ketterhagen to clutch in a 3-1 win on Sunday.

“A win, at least with perception, always seems to fix things,” Plant said.

Both teams scrambled to revive seasons that have been bereft of measurable success, particularly the Cougars who, over a three-year stretch, logged 40 successive matches without a win.

The physicality of the match sparked tensions at moments, including when Barbara Castellanos pushed Victoria Wharton in the back near the right corner on Eastern’s side of the field late in the first half, though the ball was not in play when the incident occurred.

Chicago State head coach Christiano Costa carried Julia Oliviera off the field after a lower right leg injury, sustained on a Cougar drive at the end of the second half.

Physical play aside, Plant did not believe there to be any discernible contrast in the offense’s performance between the two halves, noting that all he told the team at intermission was to model their play in the second after that of the first. In the first half, the Panthers’ offense wielded its influence with an outpouring of shots from, among others, Kenzie Balcerak, Rachel Pappas and Sarah DeWolf. He expatiated on his confidence that the team will create some continuity as the season progresses.

“And this group is going to get it done,” Plant said. “They will get it done, it’s just a matter of getting into rhythm and playing doubleheader weekends, which we have not had a lot of a chance to do this year.”

Eastern inherited a 1-0 deficit in the second half after Barbara Castellanos found space on a breakaway to the net, where she skidded the ball past Sara Teteak for the first Cougar goal this season.

Connecting on a Haylee Renick pass 16 minutes into the second half, freshman Nicoletta Anuci lined the ball low and to the right, powered it past the keeper to tie the game and earn the first goal in her collegiate career.

The goal opened up the lanes to the net. Four minutes later, Eastern profited off a penalty kick situation.

As Chicago State goalkeeper Madison Beyer dove to her right in anticipation of the penalty kick, senior Lexi Ketterhagen’s shot eluded her and the Panthers went up 2-1.

The attack did not stop there. Having compiled three shots in the first half, Sara DeWolf juked out Beyer off a Kenzie Balcerak assist to reinforce the Panthers’ lead with a three goals to one advantage midway into the second.

“That is just Sara’s attitude to life,” Plant said.

“She just keeps knocking on that door until somebody answers, so I was super happy she got her opportunity to score because she does a ton of work and I’m just over the moon for somebody like Sara DeWolf to get her goal, and especially the way it came.”