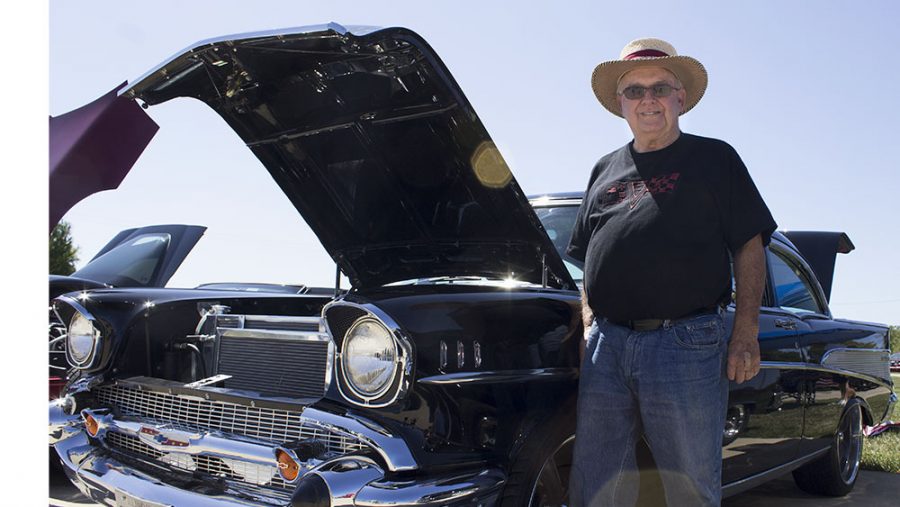 Dick Bulter, of Mattoon, stands with his 1957 Chevy Bel Air at “Can’t Drive 55” car show. Butler said his favorite thing about owning an old car is to anwser questions people may have.

The “Can’t Drive 55” car show was an opportunity for people look at a wide array of vehicles.

Many people took advantage of the nice weather to attend the event, show off their cars, and learn more about the vehicles at the show Saturday morning at the Lifespan Center in Charleston.

Dick Butler, owner of black 1957 Chevy Bel Air, said he was enjoying the weather while at the event.

“Well, the weather is great, a little warm, I should’ve brought shorts, but other than that it’s fine,” Butler said. “It’s a nice day for a car show.”

Larry Wesch, owner of a 1932 Ford Roadster, said he only thing he could think of to improve the weather would be if it was less bright.

“I think it’s nice, the only thing that could make it better is some shade,” Wesch said.

The car show featured many different types of vehicles varying in age and color.

Gary Rinker, owner of a 1957 Chevy Bel Air, said that the competition was tough and full of “some really beautiful trucks and cars, a good variety of new and old.”

Butler said one of his favorite parts of attending car shows is the variety of cars on display.

“I’d rather stay home and drive (my car), rather than coming to the shows, but when I do go I get to all these other cars, you can see all the variety,” Butler said.

Butler said his favorite part of showing his car is answering questions people have about his car.

“Just sitting here, and people come by and ask you questions, like ‘how much horsepower does it have?’ ‘What kind of engine is in it?’ ‘Just telling people all about it really,’” Butler said.

Rinker said this favorite part of car shows is meeting people who are interested in his vehicle. “Having the people tell you ‘Oh I had one just like that when I was a kid’,” Rinker said. “That’s the best thing, meeting people.”

Butler and Rinker both said one of the hardest parts of having older cars was restoring them.

Butler said his vehicle underwent a lot of restoration before being ready for a car show.

“It’s had a frame off restoration, nut and bolt restoration, everything on this car has either been made new or replaced with new,” Butler said.

Rinker said he personally put a lot of effort into restoring his vehicle.

“Three years ago we started the process of taking all the paint off by hand, that took several months, then me and a buddy built a portable paint booth in my shed and we started putting it back together, that took about a year,” Rinker said.

Rinker said that he thought the work he put into his vehicle paid off and he enjoys when people notice his vehicle.

“My favorite part, driving it, and showing it, it’s fun to drive, people are always cranking their heads to see, like ‘oh what’s that,’” Rinker said.

Butler said plans to keep going to car shows for the community they build.

“It’s good to see all the other cars, it’s good to meet up with you buddies, really it’s just a place to gather,” Butler said.

Rinker said he does the shows “mainly for the young kids to see what it was like back in the early days of automobiles.

Rinker said he feels that without car shows young people would not get the same knowledge of older car but that the show are for all ages.

“They never would experience this if we didn’t come out here. And it’s for the older people too, for them to remember.”