OVC volleyball standings have yet to take shape 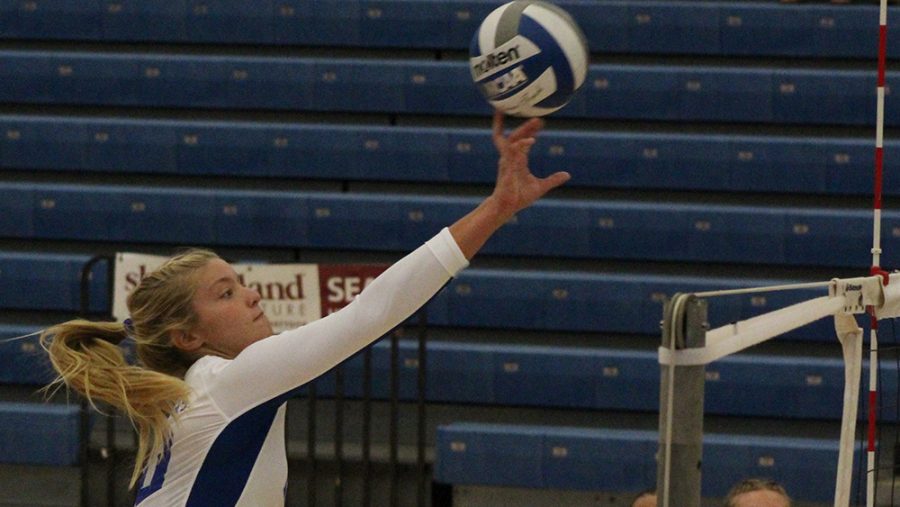 Adam Tumino | The Daily Eastern News Katie Sommer tries to tip the volleyball over the net for an Eastern point. Eastern lost 3-1 against Drake Aug. 31 in Lantz Arena during the EIU Panther Invitational.

After the first week of the season, the volleyball teams in the OVC were struggling as a whole; the 12 teams in the conference posted a record of just 9-28 in that span.

Since, they have gone a combined 20-22, thanks in part to the continued success of Morehead State and Southern Illinois Edwardsville.

Both the Eagles and Cougars are 5-1 to begin the year and have each won five matches in a row. Only one other OVC team, Southeast Missouri (4-3), is over .500 so far.

The two best teams in the conference last season have started slowly. Austin Peay (1-5) has already matched its overall loss total from last season, when they posted the best overall record and best conference record in the OVC.

Murray State, which beat the Governors in the OVC Championship, is not faring much better with its record of 2-4.

Eastern is one of two winless teams at this point as both it and Tennessee Tech have lost their first six matches.

After the first week of matches, the Panthers found themselves in the top five for six of the seven statistical categories on the OVC’s website.

Early-season numbers are often not indicative of any larger trends, which is exemplified by Eastern’s current statistical rankings.

Now, the Panthers are in the bottom five in six of those seven statistical categories. They are still in the top five in service aces, ranking fourth with their 1.64 aces per set.

Eastern head coach Julie Allen has said that her goal is to get the team to average at least 16 kills per set. Currently, the Panthers are 10th in the conference, averaging 10.91 kills per set.

In fact, no OVC teams have reached that number. Morehead State is currently first with its 14.45 kills per set.

Four Eastern players are on the individual leaderboards this season. Maggie Runge ranks ninth with a .284 hitting percentage.

Laurel Bailey and Bailey Chandler are tied for ninth in the conference in service aces, averaging .36 per set. Chandler was ranked 10th last week as well.

Chandler is also in the top 10 in assists for the second consecutive week: She is currently ranked seventh with 8.45 assists per set.

Madison Cunningham retained her seventh spot in digs despite her average dropping slightly, from four digs per set to its current 3.91.

The Panthers have six more matches before conference play begins in two weeks. They play on Friday at 3:30 p.m. against Middle Tennessee in the Evansville Dunn Hospitality Tournament.