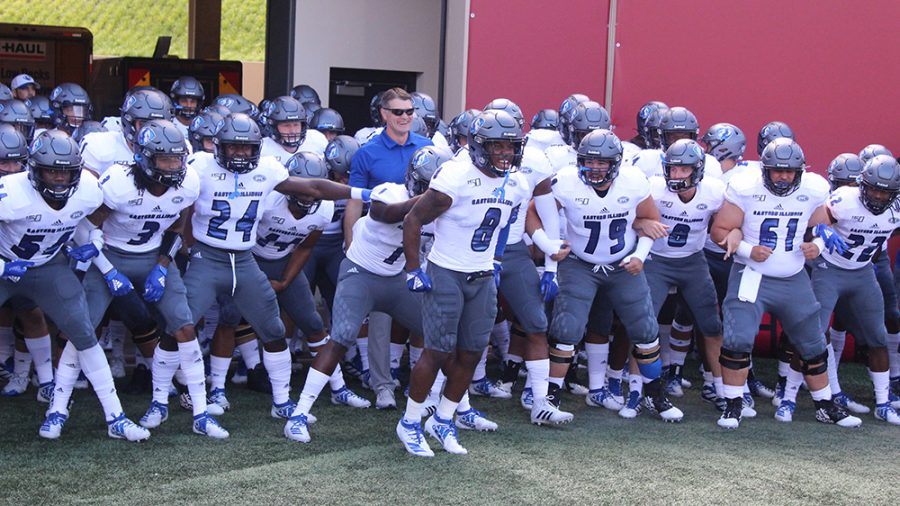 Adam Tumino | The Daily Eastern News The Eastern football team gears up to get ready to run on the field before its game vs Indiana. Eastern lost 52-0 to Indiana Sept. 7 at Memorial Stadium.

It was brought up in Eastern head coach Adam Cushing’s interview for the job; it was apparent to him even during his first week on Eastern’s campus that beating Illinois State on the football field was a priority for the Panthers.

This rivalry, which will be played in its 108th edition on Saturday at O’Brien Field, runs much deeper than just a football game. It is Illinois State vs. Eastern. Red vs. blue. The competition between the two schools extends to classrooms, it is Illinois State’s rendition of a flagship building named “Old Main” vs. Eastern’s, Bloomington-Normal vs. Charleston… the debates are endless. “Who has the better campus?” “Who has better academics?” “Who has better parties?” The football game is just icing on the cake.

And this Saturday’s game comes with a little extra icing as this version of Illinois State vs. Eastern will literally pit brother versus brother, with Ben Solomon starting at center for the Panthers and his older brother Adam starting at left tackle for the Redbirds.

The rivalry between the two schools is still recognized here, but for the Solomon brothers, the rivalry game gets a little more important on Saturday as bragging rights will be on the line.

“It is always a big deal when you get that kind of opportunity (to play your brother),” Ben said. “I am lucky to have it, obviously yes it’s a little bit of a bigger deal, it’s a rivalry game to start to with, but obviously there is a brother rivalry as well, like it is with many brother-to-brother relationships. So yeah, I am excited for it though.”

There has not been any smack talk between the Solomon brothers, however. Ben said the two have a tremendous amount of respect for each other, but when asked if he had spoken to his brother yet this week, Ben said “of course not,” until the game clock ticks zero on Saturday, the Solomons are keeping it all business.

“Of course not, I haven’t talked to him yet this week, I think it is kind of, he knows and I know that I guess it is just an unspoken rule that you kind of got to lock into game week and treat it as if it is another game and not talk to the opponent,” Ben said.

Ben kept it light when talking about his brother and it is clear that there is a lot of mutual respect between the two former high school teammates. While both will be trying to win on Saturday in the spirit of the 108-year old rivalry, win or lose, the close relationship the two have will still be visible.

“I’ll go see him on the field and there will be a warm embrace no matter who wins or loses,” Ben said. “Like I said, we’re very close and I am excited for that moment.”

Mom and Dad will be attendance too, of course. And the question of how the parents would be splitting up cheering duties and wardrobe choices drew a chuckle from Ben.

“Mom and Dad were kind of saying they’re a little distraught and don’t know how to feel about it, so we will have to see how that goes,” Ben said. “I think they are going to split (the school colors) up I suppose. You know, it’s funny, my Dad said he was going to wear a little bit of both, but we’ll see. I am interested to see what they do with that.”

Come Saturday at 2 p.m. when the two teams kickoff, Mom and Dad will be watching their two boys, who played on the same offensive line in high school, trying to hand the other one a week three loss. This will be the first time the Solomon brothers have ever been on opposite sidelines of each other.

This football game means a lot for a plethora of reasons. It is why it was brought up in Cushing’s interview and it’s why a trophy is given to the winning team every year. It is because all of the debates, at least for one year, get settled on a 100-yard X 52-yard plot of grass.

“That is one of the best parts about college football is the history behind rivalries, playing in trophy games, when you get to be a part of that kind of history its really, really fun and people are definitely keyed into this one, that is for sure,” Cushing said.

The campuses of the schools are separated by just 105 miles, but the football programs in their current states may as well be a world apart.

Eastern is coming off of a 3-8 season after which it let go of former head coach Kim Dameron. Illinois State is coming off of a 6-5 season, in which they lost their last four games in a disappointing finish that had its FCS playoff hopes dashed.

In 2019, the Panthers are a program in transition, with a first-year head coach in Cushing trying to turn the Panthers into the new FCS powerhouse in Illinois.

Illinois State on the other hand has head coach Brock Spack back for his 10th season in charge and is also the No. 12 ranked team in the FCS, with more hopes of crashing the FCS playoffs at season’s end.

“They’re a good football team,” Cushing said of Illinois State. “I know coach Spack, he’s a good football coach, he coaches them the right way and he has done a nice job building his program over the years, he has built it up the right way, he recruits the right way, all of those things. But we’re not concerned about, quite frankly, across the field from us, it is exciting to be a part of the rivalry but it’s more of about us, more about us being one game better. As coaches and players we were not out best this past week, so it’s just us focusing on being our best.”

The football programs are in different places. The campuses each have their own quirks and charms. It is red vs, blue. Redbird vs, Panther. Solomon vs, Solomon. It is the 108th chapter of a deep-rooted rivalry, and come Saturday a conclusion to that chapter will be written.

-Illinois State returns 16 starters and 39 letter winners from last season’s 6-5 team, including multiple All-Missouri Valley Football Conference performers. While last year was certainly considered a disappointment for people in and around ISU football, high expectations surrounded the team entering this season. The Redbirds were picked to finish third in the  MVFC, and have their sights set on championships.

-The Redbirds are coming off of a blowout victory over Morehead State in which they scored 35 first half points. Overall, the ‘Birds had a complete turnaround offensively from the week prior, specifically on the ground. After managing just 51 rushing yards on 28 attempts in a 24-10 season-opening loss to Norther Illinois, ISU exploded for 353 rushing yards last week. All-American running back James Robinson led the way with 178 yards on 23 carries after gaining just 32 yards on 19 attempts against the Huskies a week prior.

-Redshirt junior quarterback Brady Davis has struggled a bit through the air so far this season, but last week he proved that he can be multi-dimensional after he added 89 rushing yards to Robinson’s total. Davis’ rushing outburst included a 52-yard touchdown run, which he admitted he had “never really done before.” If Davis can continue to find success on the ground, the ISU offense will go a long way.

-The Redbirds are trying to fill the void at wide receiver left by MVFC All-Conference First Team selection Spencer Schnell, who led the Tampa Bay Buccaneers in receiving yards in the preseason before being waived prior to the start of the regular season. While it was expected that sophomore Andrew Edgar would pick up most of the slack, so far it has been sophomore Taylor Grimes that has been Davis’ favorite target. Thus far, Grimes has 155 receiving yards and a touchdown on seven receptions. Edgar, who missed the game against NIU with an injury, also caught a touchdown pass against Morehead State in limited action. Expect both of these guys to be threats Saturday.

-The ISU defense was second in most statistical categories in the MVFC last season, and returned multiple main catalysts to this season’s squad. Thus far, ISU has limited its opponents to just 247 rushing yards on 71 attempts. Seniors Luther Kirk (13 tackles, 2 passes defended) and Tuvone Clark (11 tackles, 2 tfl, 1 interception) have led the way so far for the defense. Watch out for these two, along with defensive lineman John Ridgeway and cornerback Devin Taylor.