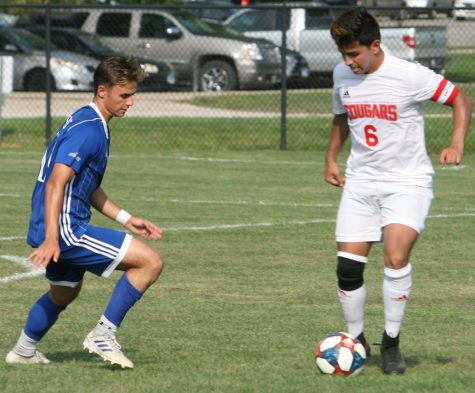 Perhaps the best thing to come from the men’s soccer team’s 2-0 victory Tuesday is the placement of certain personnel on the field.

Since I started covering the team last year, I have admired the way Eastern midfielder Cole Harkrader plays.

This year, as a returning starter in the midfield, he is not a captain but still remains one of the most outspoken voices on the field, giving commands to teammates or trying to rally the troops in tough situations.

Last season and at the start of this season, he played, a lot of times, a role similar to that of a defensive midfielder it seemed, and he was a focal point of the team’s possession in its own half and as it moved the ball in to the attacking third.

Tuesday, he played higher up the field more and that is a place he should remain for the season.

Harkrader looks like he was born to be a midfielder: He has high field awareness, knowing where defenders are at when he has the ball and avoiding them perfectly.

He also possesses a high soccer IQ, being able to direct teammates where the ball should go while also making smart plays himself.

The skillset he utilizes for the position he plays could fill a needed role on this team.

The Panthers use the wings and corners a lot for offense, trying to make passes to these areas and trying to cross the ball in to the box from them.

But maintaining possession in the middle of the attacking third is something the team is still working on, as it has not gotten a lot of shots or close chances in that area.

As Eastern gets closer and closer to the opponents’ 18-yard box, finding space and creating passing lanes between the defense gets tougher for the team to do.

The effect of this leads the team to being “stuck” without a good chance to score, as head coach Kiki Lara said on the sideline during Tuesday’s match, typically leading to passes going back to the defensive line for a switch of the field for a different angle of attack.

With Harkrader stepping in to a more forward role in the middle of Eastern’s attack, his awareness could prove to be helpful for the Panthers to start finding chances closer to the goal and breaking apart opposing defenses, rather than relying on crosses so much.

Also, if he is to play up more, he needs to be utilized to his full potential because he can add a lot to the attack, which would mean trying to cut down on just playing the ball to the wings and corners, another way Eastern gets stuck in the attacking third.

Filling in for Harkrader’s typical role Tuesday was Nate Francke, who scored the first goal of the match.

Francke, as a freshman last season, stepped in to the starting lineup as a defender and did well, both in defending attackers and connecting passes to teammates.

He did well playing in the defensive midfielder role Tuesday, and, much like Harkrader, had a great sense of where opposing players were and kept his head on a swivel, connecting passes and switching fields.

The only quibble I find thus far in the season is Christian Sosnowski’s role.

Lara said it at the beginning of last year and again this year, that Sosnowski was and is a leader for the team, mainly on offense.

So far, at times, he seems to be playing back a little bit to help with defense but has not gotten up with the attack a lot.

Also, in the first two matches of the season, he did not appear to get a lot of touches with the ball.

I understand why he is back on defense, but I think, to utilize his speed and dribbling and shooting abilities, he could play up even more, maybe even get time as a forward.

He scored against a Big Ten team in Ohio State (his first goal of the season), and he led the team in scoring last year with three goals, including a double overtime, game-winner against Western Illinois that gave the Panthers a helpful win in conference play (its only win).

His quickness and shooting capabilities could add another layer of threat to the Eastern attack, as he can fire shots from outside the box (like he did Tuesday) and is great at getting to the corner and crossing the ball.

Considering Eastern’s noticeable advantage against Saint Xavier Tuesday, and 2-0 lead late in the match, Lara started getting a lot of players more minutes and moved some around to different positions.

Harkrader’s move in to a more forward position could be the most impactful for the future of the season, and he should (quite literally) be the centerpiece of the offense’s attack, with Sosnowski also getting as many touches as possible.

Otherwise, though, the defense seems to be setting in after a rough start to the season, with Quinn Rechner and Delphy Sabu filling defensive roles left open from last season; of course, Edgar Mesa, the captain of the team, is back as the centerpiece for the defense.

Shady Omar showed why he is an effective forward Tuesday, using his head to almost score a couple goals while assisting another by flicking a pass to a teammate.

And Cameron Behm broke his scoreless and pointless drought, dating back to last year, Tuesday with a goal, and he is continuing to be a fast attacker on the wings.

The pieces are there, and that has never been my question with the team. My question dealt with how the team could score when its avenues to do so seemed limited for a while.

But these players, mainly Sosnowski and Harkrader, leading the offensive attack is a way I see this team becoming a bigger threat to score against its opponents, mainly for when conference season arrives.