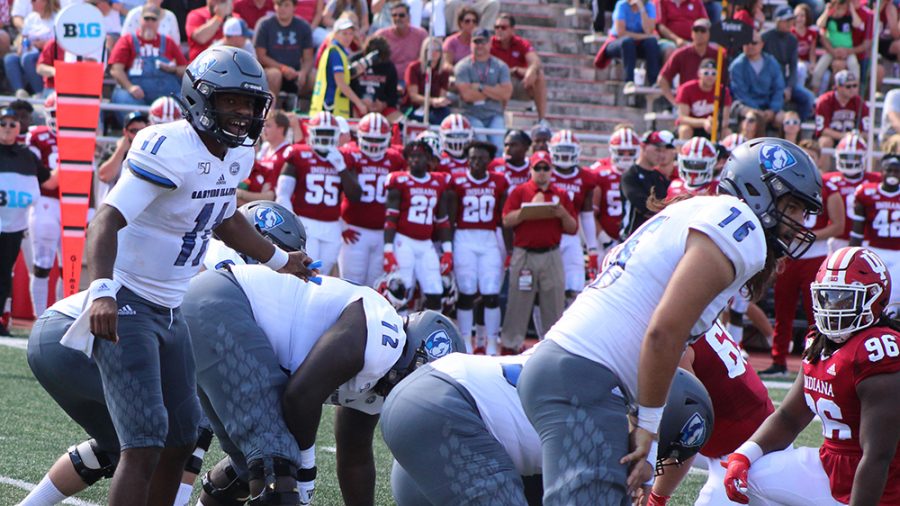 Adam Tumino | The Daily Eastern News Johnathan Brantley calls out commands to his offense before the play. Eastern lost 52-0 to Indiana Sept. 7 at Memorial Stadium.

It is rare in Division I college football for a program to start a freshman on the offensive line.

Typically, the responsibility of protecting a quarterback and clearing lanes for ball carriers is reserved for veteran players on the roster.

When a freshman does crack the starting lineup on the offensive line, it is usually a decision that comes with much discussion by a coaching staff and one that is compelled by a freshman who comes to campus and displays a high level of talent on the football field.

The trio, who under a year ago were stilling playing under Friday night lights in high school, is made up of left tackle Chad Strickland, left guard Elkhanan Tanelus and right guard Anthony Sottosanto.

The three of them recognize the rarity of what they are doing, but they are confident and loving every second of the opportunity.

The transition from high school football to college football is a big one, and it is not always an easy one, especially for the guys playing in the trenches.

But Strickland, Tanelus and Sottosanto have been able to lean on each other and on upperclassmen when things get tough.

“We’re just a tight bunch together, the freshmen, we’re tight, but this whole team is really like just a big family,” Strickland said. “The linemen it seems like we are always a little bit closer because linemen are at the same position, we’re different from everyone else and not just freshmen lineman, but upperclassmen as well, we’re able to lean on each other, ask each other what we need to be doing, what we’re doing wrong.”

Sottosanto was the first to find out he would be starting in week one against Chattanooga, Strickland found out about a week later.

Strickland said when he found out he would be starting he was both excited and nervous, but knew he had to step up for his teammates and just play football for the Panthers.

Sottosanto had a goal to start games for the Panthers this season from the moment he arrived for camp, but he knew nothing in football was guaranteed.

The decision to place Tanelus, Strickland and Sottosanto in starting roles was not a difficult one for the coaching staff based on what they saw from them in camp.

Head coach Adam Cushing said the decision was not about how old guys were, but rather which guys showed a love for the game of football and a trust in themselves to get the job done, something that each guy did in camp.

“That’s not technical o-line stuff but they just believe in themselves and they have a high-level of confidence and they are physically capable,” Cushing said. “There are guys that trust themselves that just aren’t ready to line up against grown men, these guys are from good high school program, they weight trained well, they know what it takes to succeed. So, you have to have a little bit of just strength to go play in the trenches, but then they were also well coached.”

The trio eventually did get to show everyone what they could do on the football field in a week-one loss to Chattanooga on Aug. 29, in which they blocked for an offense that put up 130 yards rushing in the game.

Redshirt-junior right tackle Cole Hoover has been mentoring and watching the three closely, and after the team lost to Indiana in week two, he said he saw the three take a step forward in the sense that their heads were no longer spinning like they were at time in their collegiate debuts.

Hoover added that they were already starting to communicate better as a unit.

“It was a big jump, obviously first game, but at the end of the day it’s football and coach Cushing say you have got to trust yourself and you play 2-by-4 between the uprights,” Sottosanto said. “Cole (Hoover) has done a great job mentoring us. Really, (Hoover) could step in and be o-line coach right now in my opinion, he’s very intelligent and does a good job with us.”

Cushing broke down each one of the freshmen Wednesday morning, highlighting the uniqueness each player had and some of the similarities they shared, the biggest of which was their simple love for the game of football.

“All three of those guys, truly, they are attached at the hip, they love football, they love being here, they love walking in at 5 a.m., they have got a big smile on their face, they’re excited about it,” Cushing said.

Here is how Cushing spoke of each guy individually:

“Chad is probably leading the way with (the positivity), big smile and he is just unflappable,” Cushing said. “He’s playing left tackle, he’s playing the money position and when you play that position you are going to get a lot of adversity thrown your way and he just has that kind of even-keel ability to respond to whatever happens, positive or negative, it doesn’t matter he is going to have the exact same attitude and exact same approach on the next play.”

Tanelus was not available for interview on Wednesday because of a scheduling conflict, but Sottosanto, Strickland and Cushing all lit up when asked about the player referred to as “Elk”.

The heaviest man on the offensive line not only packs quite a bit of strength at the guard position, but also brings a big personality to the line as well.

“Elk keeps the group loose,” Sottosanto said. “Great guy too. He has really stepped in, took the job, keeps us loose, fun guy to be around and we’re going to progress each game and he is going to be a great player down the road and I think we’re all excited to play next to him.”

“Tanelus loves every second of life,” Cushing said. “He truly feels that every second of life is a gift to him and even more so it is like a gift with the freaking cherry on top to be in football and so he has that attitude. O-linemen are all kind of that way, but he is the guy that is screaming and yelling and having a blast, it could be the tenth wind sprint that we are running and Elk has still got that attitude and that’s why he can succeed. If he has control over his mind and that makes him really pretty good, then obviously it can go to his physical strength.”

Tanelus is strong, not just for a freshman, but for an offensive lineman in general.

Sottosanto is a guy who radiates confidence and leadership. From early in camp the freshman guard has stepped up and been a leader for those around him, which is one of the main reason Cushing and the Eastern coaching staff recruited him.

“Sottosanto is a really tough-minded, physical individual with some of the best natural leadership to him that I have been around for a young guy,” Cushing said.

Sottosanto’s high school coach, a friend of Cushing, told Cushing that Sottosanto was one of the best two leaders he had ever had at his school, and so far, those words have rung true with Cushing.

“For somebody I trust to say that to me and then he walks in the door and sure enough he is one of the best young leaders I have ever been around,” Cushing said.