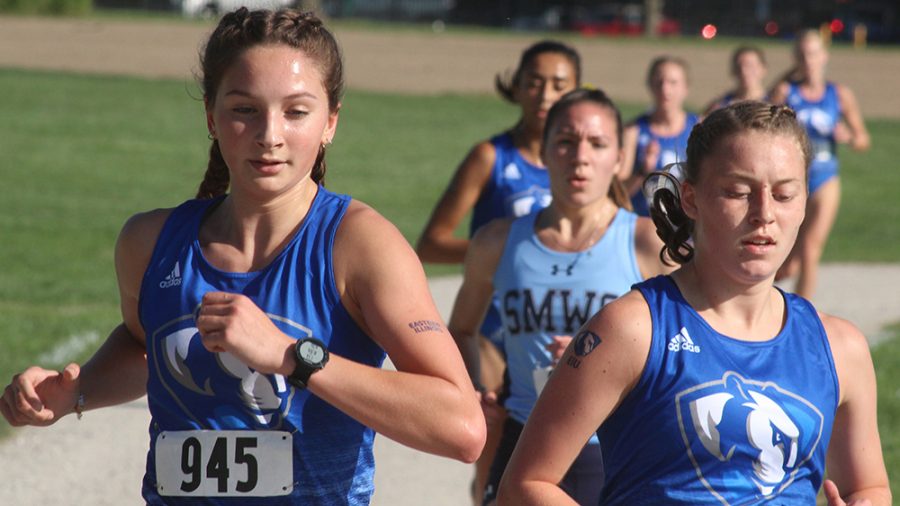 Both the men’s and women’s cross-country team won first place at their first meet of the season Friday afternoon.

The teams gathered at the Tom Woodall Panther Trail in the low 80-degree heat to start the men’s 8K, which would be the first race of the evening.

The male Panthers performed at a high level that lead to them having five runners place in the top six with Southern Illinois Edwardsville in third. Franky Romano placed first for Eastern with a time of 25:44.7 seconds, and Jamie Marcos placed second with a time of 26:14.2 seconds.

“(Romano) was lights out awesome,” said head coach Erin Howarth about the runner who beat his personal best by 15 seconds. “Anytime you do something like that, you know you put in the work over the summer.”

Among the other top finishers for the men were Adam Swanson in fourth, David Thompson in fifth and Trevor Murphy in sixth.

As for the women, they raced in a very competitive 5K. The event started close and the winner was decided by only a handful of seconds. Eastern’s Grace Rowan won the race with a time of 18:16.7 with Helena Keenan behind her for a time of 18:31.4. Rowan tied her second-fastest 5k cross-country time, becoming the eighth-fastest Panther  all-time at the EIU Walt Crawford Open.

Likewise, the top six runners contained four female runners from Eastern. This is a significant improvement from last season where only one Eastern runner finished in the top ten.

Avani Flanagan placed fourth for the women’s team with Maggie McPherson in sixth.

For McPherson, a sophomore fashion merchandising and graphic design major, the race was “a lot of fun,” and she was excited to be racing with her teammates again after a long summer break.

At their practices, the team worked on staying packed together, which means they run in groups based on their skill levels to make it harder to be passed by another team and to have moral support right next to them.

Over the course of their season, the team will be working on two primary goals: “Make the season about E-I-U not Y-O-U and to focus on pack running,” Howarth said. “A nice tight racing pack is like a snowball; the longer the pack stays together, the stronger the pack becomes, the more confidence it builds, the more excitement and force it has behind it,” Coach Howarth said.

Packs are beneficial to get the team to the last mile of the race, which is “where the race really happens,” according to Howarth.

In order to push through until the end, runners all do something different for extra motivation. For McPherson, she recites certain words or phrases in her head for encouragement.

The team’s next meet is the Indiana State McNicholas Invitation Saturday, Sept. 21. “I know it will be a competitive race,” McPherson said. “We need to be aggressive and competitive throughout the whole race.”