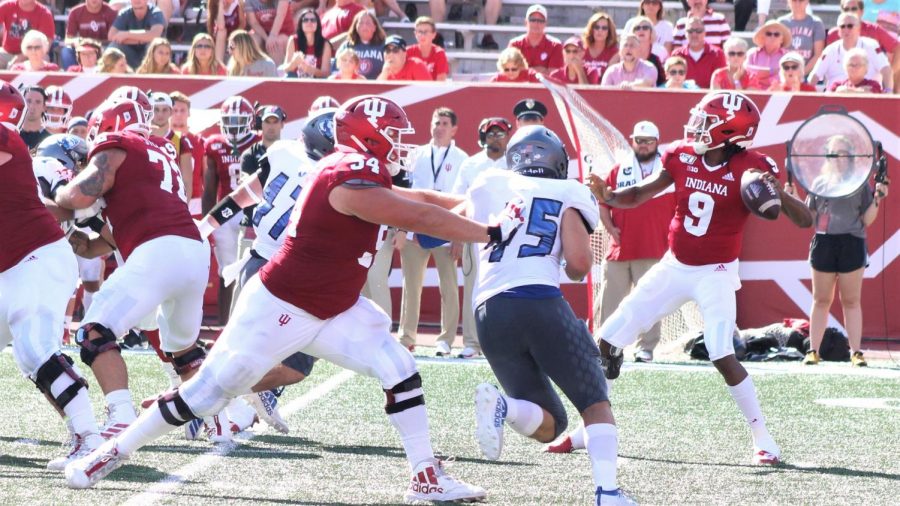 Indiana quarterback Michael Penix Jr. fires a pass down the field in Indiana's 52-0 win over Eastern on Saturday. Indiana had over 400 yards passing in its win.

BLOOMINGTON, Ind- Joe Caputo hit his hands against his helmet after tackling Indiana’s Ty Fryfogle, knowing Fryfogle just secured a first down that lead to Indiana’s second touchdown of the game.

With the touchdown, Indiana led Eastern 14-0 in Saturday’s contest, but the catch and run by Fryfogle gave Indiana a first down on Eastern’s five-yard line after being put in a third-down situation.

One play is not the sole culprit of a loss as big as the Eastern football team suffered to Indiana Saturday, but the logistics behind the play showed a glaring problem Eastern’s secondary faced.

Throughout Saturday’s 52-0 loss to the Hoosiers, Indiana receivers enjoyed comfortable breathing space when catching passes from their quarterbacks.

Eastern head coach Adam Cushing said the secondary used both a zone defense and man-to-man defense, mixing it up to try to keep the Indiana quarterbacks off balance.

“We were just playing, you know giving them a lot of space, and you do that when you respect an opponent,” Cushing said. “But we probably got to trust ourselves a little bit more and go get, take away some of that space.”

The issue was apparent in the first half, much less the first quarter, where Eastern’s secondary sat off receivers a couple yards, allowing Indiana receivers to catch a pass with ease, while also being able to run for a couple yards after the catch.

A third down in the red zone typically will end up in points, whether by a touchdown or field goal.

In this case, Eastern was already trailing 7-0 in the first quarter with a chance to hold Indiana’s fast-moving offense to just three points.

The Hoosiers just used its first timeout of the half, with 5:49 left in the first.

Michael Penix Jr, Indiana’s starting quarterback, dropped back off the snap and, after a brief scan of his options, found his receiver Fryfogle who positioned himself in a pocket in the middle of the Eastern defense.

Fryfogle, who had to get six yards on the third down play, initially sat two yards short of the first down when he caught the pass, but because he had no Eastern defenders within a few yards’ space, he was able to gain four more yards and get the first down.

Two plays later, Eastern found themselves down 14-0 after a five-yard run, instead of, possibly, 10-0.

In the first half alone, Indiana averaged 17.4 yards per completion (some big plays make that number so high).

Not all of the passing plays where Eastern’s secondary sat off Indiana receivers led to touchdowns, or even first downs, but Indiana’s receivers benefited from the space given to rack up yardage upon yardage.

Part of Indiana’s ease of moving the ball down the field was its hurry-up offense, which left Eastern’s defense, not just its secondary, in a scramble at times and led to easy gains that chained together.

The space Indiana’s receivers had for most of the game was not limited to just situations where they had space to run after making a catch; sometimes, the space they created was for themselves by getting ahead of their secondary coverage on routes.

Eastern gave up too many big passes where Indiana receivers gained a lead of a few steps on Panther defensive backs.

One of the earliest such plays was Indiana’s first touchdown, where Miles Marshall ran a slant route across the middle of the field and caught a 10-yard touchdown pass from Penix Jr.

Marshall had two steps on his Eastern cover, a trend Indiana gladly continued throughout the game.

Even short passes, screens or check downs that Indiana did would go for six-plus yards, which are hefty yardage amounts to give up on first downs.

One such screen play led to Indiana’s third touchdown, which also came in the first quarter.

Eastern just had its punt tipped, deep in its own territory, and Indiana took over at Eastern’s 32-yard line.

Two minutes were left in the first quarter, with Indiana leading 14-0, a screen pass went for 29 yards to the Eastern three-yard line, setting up the easy score.

Whop Philyor stacked up behind a lead receiver in the slot, and the Eastern defensive back assigned to Philyor dropped back off the snap, and Philyor, with one blocker and his defender nowhere near him, turned the screen pass into a near score.

This was an issue the Eastern secondary faced in its season opener against Chattanooga, too, as Eastern gave up 9.5 yards per pass and 15.1 yards per catch to the Mocs Aug. 29.

Eastern’s secondary has been beaten up in the team’s first two games, and in all fairness, Indiana is an FBS team.

But these problems are important to fix in the next two weeks before conference play starts, and who knows, maybe a beating up will be what the team needed to get in to proper form.