Column: Tough start for women’s soccer does not indicate bad season ahead 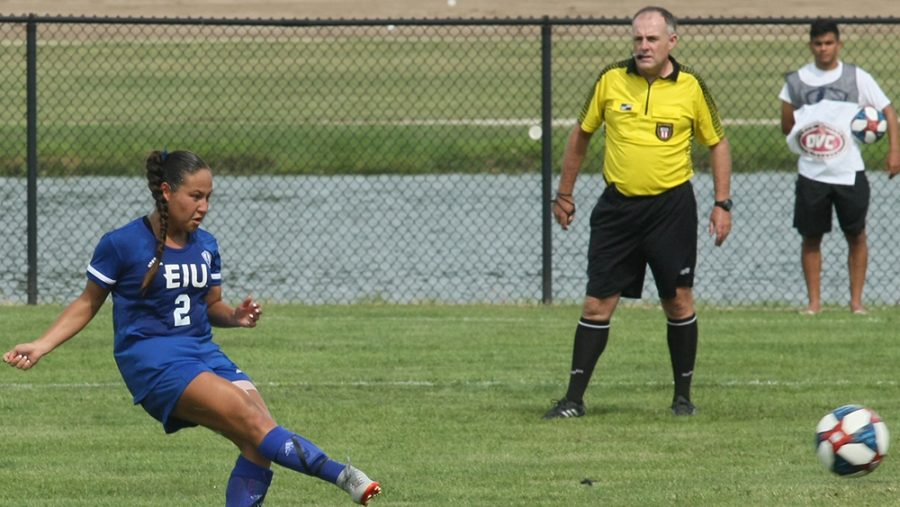 It has not been a ceremonious beginning to the season for the Eastern women’s soccer team.

The team’s 0-2 start began with a 6-0 season-opening loss against Ball State, and after a week off, the projected No. 2 in the Western Athletic Conference, Missouri-Kansas City, staved off the Panthers in a 2-1 contest.

On paper, you might expect those two scores to be flipped.

Ball State has been touted as a defensive-minded team after posting just 1.5 goals per game last season, whereas the Roos managed 2.43 per game in 2018.

After the season-opening loss, junior midfielder Haylee Renick likened the Ball State contest to last year’s matchup with Milwaukee, citing it as a learning game.

In 2018, after Eastern fell to Milwaukee by a 3-0 deficit, Eastern cleaned up non-conference play with a 2-3-1 record, eventually nabbing the No. 3 seed for the OVC Tournament.

In 2019, nonconference play did not start any easier, as Ball State and Missouri-Kansas City finished with a combined record of 30-8-3 last season and have yet to drop a game this season.

The difference is that the team followed up last year’s learning game against Milwaukee with a 3-2 loss against Wisconsin-Green Bay, one of just two wins the Phoenix recorded on the year.

This season’s rebound proved to be a stronger step up in many regards, as senior goalkeeper Sara Teteak made 10 saves on the day and freshman Nicoletta Anuci posted Eastern’s first goal of the 2019 campaign.

Goal scoring remains a key factor in the team’s success this season, considering the team averaged under a goal per contest last season, but a new face like Anuci is here to help remedy that.

Anuci brings good speed and foot skills—two aspects that helped her record Eastern’s only two shots on goal last contest—and she says she is focused on doing those things going forward.

“I was always told ‘Don’t worry about the score, the game can change in a second,’” Anuci said. “So just keep playing hard and good things will happen.”

Coincidentally, Eastern’s next match comes against the team that gave them that learning experience last season.

The Panthers head to Milwaukee for game three of the season to face a squad that boasts a +4 goal differential in four contests this season after finishing 16-2-1 last year.

Although Eastern does not get a break from the tough competition, the hard slate could prove to be more beneficial to a team that continues working out early season kinks on both sides of the ball.

The Panthers’ focus should remain on OVC play, and getting to take a few licks at tough non-conference opponents could bode well for late-season action just as it did last year.

However, that’s not to say that piling up losses will translate to success in the future.

In-game progress is not always told in the box score, and that is why matchups with top-tier challengers provide good insight for coaches and players on where to make the next move.

Holding a team like Missouri-Kansas City, that tends to score well, to below its previous average is a solid trend that, if it continues, could quietly turn around the season.

The old adage says that Rome was not built in a day, and Eastern’s tournament appearance and run last season certainly was not either.

Slow developments and added sparks like Anuci can help prove that 2018 was not just lightning in a bottle for the Panthers.