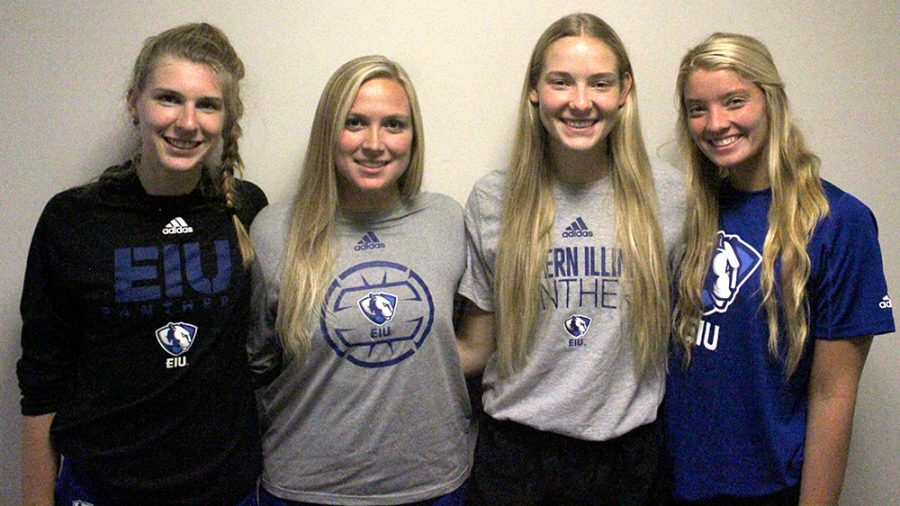 Adam Tumino | The Daily Eastern News The senior members of the Eastern volleyball team (from left) Morgan Matusik, Breanna Jager, Maggie Runge and Katie Sommer are about to begin their final season together.

When the Eastern volleyball team takes the court for its season opener on Friday evening, it will mark the beginning of a new season.

It will also be the beginning of the final season for the team’s four seniors: Breanna Jager, Morgan Matusik, Maggie Runge and Katie Sommer.

This senior class has experienced a lot of change during their collegiate careers. Some change is inevitable in college sports. Rosters change from year to year as players graduate or transfer and new recruits or transfers arrive.

Coaches change as well, though usually not as often. But the Eastern volleyball team is on its third head coach since the recruitment of this senior class began just five years ago.

Kate Price began recruiting Matusik, Runge and Sommer before resigning after the 2014 season. Samantha Wolinski took over the program the following March. Jager was recruited by Wolinski after transferring following her freshman season.

Julie Allen is now entering her second season as head coach after Wolinski’s contract was not renewed following the 2017 season.

“We’ve gone through a lot of change on our team with authority,” Runge said.

Not only have the coaches changed, but trainers and other staff have changed multiple times as well. Runge said that all the change can be challenging, but the team just has to adapt quickly in response.

“It’s kind of like taking the bull by the horns and riding with it,” she said.

Matusik said that leaning on teammates can help in dealing with the change.

“We’re all there for a common purpose,” she said, “no matter what coach we’re under.”

Jager has experienced even more change than her teammates. The Ontario native came to Eastern before her sophomore season, transferring from a program at Middle Tennessee State that became embroiled in a Title IX investigation during her freshman season.

In that season alone, Jager had four head coaches in a four-month span.

“My dad, my freshman year, told me that the only constant in life is change,” Jager said. “I think it’s more the mental side of the game that you have to overcome with the amount of changes we’ve been through, and I think our team has done a really good job of overcoming that mental hurdle.”

Jager is not the only one pleased with the players’ resilience in recent years. Allen said that she understands that the change has been hard on the team but thinks they have responded well.

“I think it’s important to recognize that they are trying to be open-minded and want to be a part of something, the change and the growth we are having,” Allen said. “I look to their advice and suggestions, so that way we grow together and form a foundation.”

Speaking of growth, the seniors said that they have noticed the changes in their roles over the years.

“Being seniors now, this year especially out of any other year, is important because we have six new freshmen,” Sommer said. “We’re definitely trying to create a culture that we want, and make sure that once we’re gone, they carry it on.”

Another big change the seniors have gone through is regarding their leadership skills.

“My fellow seniors are all excellent leaders, by example and by speaking up and making sure everything goes right,” Matusik said.

“Instead of being taught we are now teaching,” Jager added.

It is not just on the court where the seniors are leading the way, Allen said. They have been helping the younger players adjust to life as students, too.

But even among the growth and development, there is still the reality that it will soon be coming to an end. The seniors said they are trying to keep everything in perspective and make sure they enjoy themselves and accomplish what they want in their last year.

“I just want to have fun,” Runge said. “As long as we’re having fun, whether we win or lose, working through the losses to find something fun about it, and then working through that to make ourselves better so that we can win.”

Sommer also wants to see the team improve, and as a senior, she wants to be an important part of that change.

“Definitely having fun and enjoying this last year is a top priority, and overall not making only myself the best student and best player I can be, but also my teammates around me,” Sommer said. “We’ve got to take a selfless role as a leader now.”

Enjoying the remaining time with their teammates is also a priority of the seniors.

“We’re each other’s best friends,” Jager said. “Getting to have one last ride together is really exciting, but also kind of sad. It’s a really bittersweet year.”

Although their time as teammates will come to an end soon, Matusik said that she was hopeful that their friendships would not end as well.

“I want to make solid personal relationships with my teammates because they are my best friends, and I want to continue those relationships even after volleyball is over,” she said.