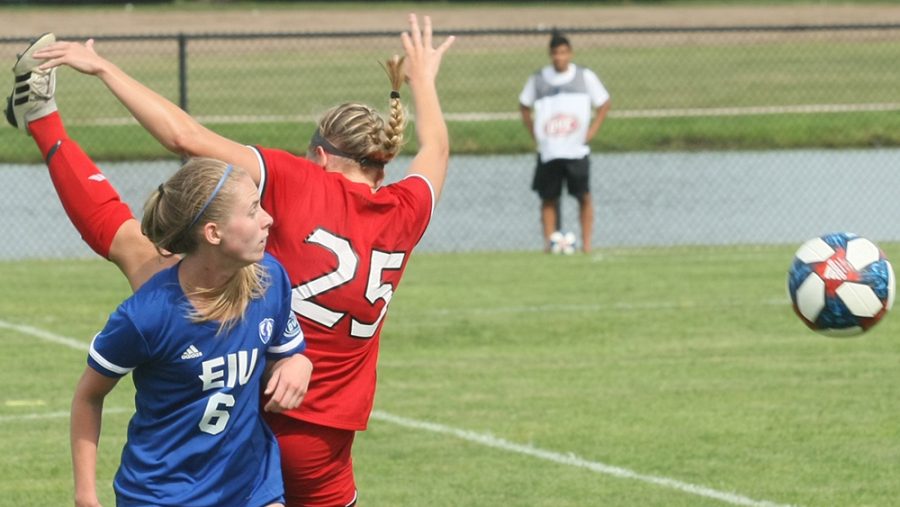 Dillan Schorfheide | The Daily Eastern News Haylee Renick posts up against a defender to try and coral a pass during the Eastern women’s soccer team’s 1-1 tie in an exhibition match against Northern Illinois Aug. 16 at Lakeside Field.

The Eastern women’s soccer team kicked off the 2019 campaign with a loss, but this week, the Panthers, along with plenty other OVC counterparts, look to right their ships.

Eastern stays on the road, after the season opener, to face Missouri-Kansas City Friday at 7 p.m.

The Panthers got rolled in their season opener, allowing six goals in a shutout loss to Ball State Aug. 23, the program’s largest loss since 2015.

Preseason favorite Murray State had a split weekend, as the Racers dropped their first match to Xavier by a 4-3 tally and responded with a 2-0 win over Samford.

Freshman Jenna Villacres got the start in net for Murray State both games, despite not playing in the team’s exhibition against Western Kentucky.

Tennessee-Martin, another preseason favorite, stayed out of the loss column as it downed Arkansas State 3-1 before playing Arkansas-Little Rock to a scoreless draw.

The Skyhawks could not capitalize on any of their five corner kicks in the contest, but Little Rock squandered each of its 13 shots en route to the tie.

Tennessee-Martin hits the road to face Evansville Thursday at 7 p.m.

An early surprise on the season for the OVC is Jacksonville State, which finished dead last in the preseason poll but proceeded to rattle off a 7-0 whopping to Alcorn State before handing Florida International a 2-0 loss.

Redshirt sophomore Morgan Lerch and redshirt freshman Chloe Russo split time in goal during the victory over Alcorn State, though neither were required to make a save.

Russo took over the duties in full against Florida International, recording two saves in 90 minutes.

Jacksonville State hosts Lipscomb Friday at 7 p.m. as the Gamecocks look to start the year 3-0.

Southeast Missouri remains as the only other undefeated OVC team after a 3-2 win over Southern Mississippi last weekend.

Both goalkeepers recorded four saves in the game, but with just under 10 minutes left in the match, senior Esmie Gonzales netted one off a pass from freshman Megan Heisserer to secure the win.

The Redhawks return to the pitch Thursday at 4:30 p.m. against Arkansas.