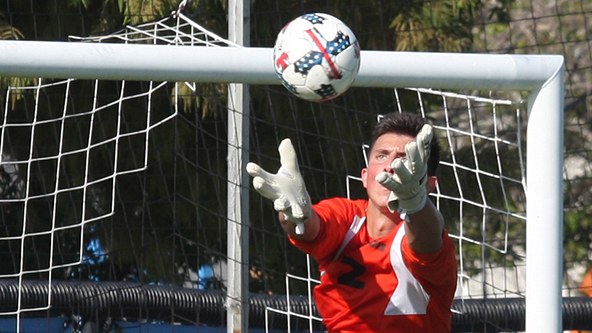 File Photo | The Daily Eastern News Eastern goalkeeper Jonathan Burke skies over an attacker to make a save during the men’s soccer team’s double-overtime 1-1 tie with Evansville in August 2018 at Lakeside Field.

When Jonathan Burke came on his college visit to Eastern he had a good feeling about Eastern’s soccer program, that if he came to Eastern everything would work out.

Burke, the starting goalkeeper for the men’s soccer team, also knew his high school statistics would have to be carried over to Eastern in forms of hard work.

In his senior season of high school, he recorded 16 shutouts, led his team to a super sectional and was a Chicago Catholic League All-Conference player.

Last year at Eastern, his first year as the starting goalkeeper, he recorded a 1.20 goals against average and saved 66 shot attempts.

Burke knew that was a good baseline, but he wants more of himself after having thoughts of those numbers possibly being better.

“I wanted to come to a soccer program that was similar to my high school,” Burke said. “One that was being built by the coaches and players and I wanted to be a part of that right away.

Right away, Burke was introduced to competition. Eastern’s goalkeeper before Burke was Mike Novotny.

“Being told by coach Lara that I was going to have to earn my spot, or “earn your pizza” as he would say, is what made me hungry to come to make my name for myself here at EIU.”

Burke learned a lot from Novotny.

During their fight for the starting goalkeeper spot, both would help each other out in the film room and on the practice field to get the best out of each other.

Novotny’s success at Eastern made Burke feel some pressure. Burke described Novotny as “one of the best goalkeepers in college” while Novotny was at Eastern.

“All the pressure was good because it was supported by all of my teammates and the guys before me to step into that starting goalkeeper role and do whatever I can to get the job done for my team,” Burke said. “I tell myself often that Mike was great and helped me become the goalkeeper I am today, but I don’t want to be the next Mike Novotny, I want to be the first Jonathan Burke.”

Although Burke has only played one season he has been described by players and coaches as one of the leaders on this team. While he has taken on his leadership role, he mentions that every player exemplifies leadership on this 2019 team.

“Some days it may be “Sos” on the team, who is a fifth-year, and some days it’s maybe Chad Hamler, who is only a Sophomore,” Burke said. “I mean Cameron Behm and Chad Hamler I look up to both of those guys and they are both younger than me.”

This season the team’s goal is to win the Summit League. Burke says there is no better motivation than being ranked last in the preseason polls to achieve this goal.

“I picked this school to be the underdogs in every game we go into and this year is truly a test for the underdogs,” Burke said.

“In the end, everything myself and my team is saying are just words for now and we know that,” Burke said. “We as a band of brothers need to put our words into actions and get shit done this season.”

The men’s soccer team will play on the road Friday against Evansville to open the season.