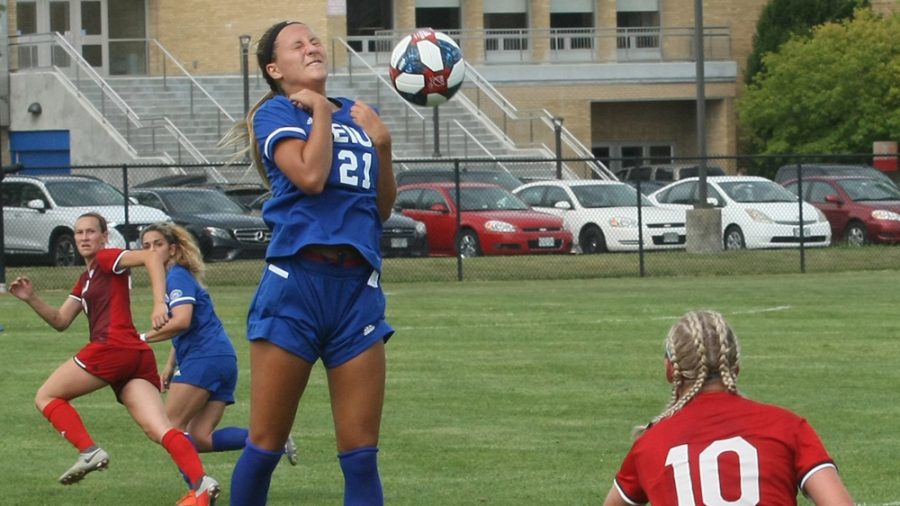 Dillan Schorfheide | The Daily Eastern News Kenzie Balcerak jumps to attempt to block a long pass by a Northern Illinois midfielder to a forward during the Eastern women’s soccer team’s 1-1 tie in an exhibition match with Northern Illinois Friday at Lakeside Field.

The Eastern women’s soccer team has greeted reminders of last season’s championship with a subtle nod to what they accomplished, though not without a sense of disappointment.

The Panthers have lamented a third-place finish and the conclusion to a season that ended in the Ohio Valley Conference semifinals against Murray State Nov. 2.

Rewinding back to the game that ultimately upended their season, a steady stream of emotions about the final result has weighed heavily on at least one returning player.

“I’ve watched it one more time, but it hurts,” Pilar Barrio said. “So, as we do not want to have that feeling again, we are making sure that we are getting better and we want to win that, so that’s our job.”

Could they advance past the semifinals, where they landed for the first time since 2010?

With the anticipation of Friday’s regular season opener at Ball State, and coming off the first postseason berth since 2013, it is time to forecast what could be in the offing for the Eastern women’s soccer team this year.  Eastern has already made some ground, starting with three exhibition games last week.

Their finish in the conference standings also translated to the most extensive turnaround since the inaugural season in 1996, a metamorphosis from a last place team in 2017 to one that finished third a year ago.

It was an upward climb from game one, defined by three losses in the opening five games and three wins to seal the 2018 season.

“Coming back from a growth year like last year, and finishing third is somewhat of a successful year. It’s not winning, but it’s making sure we grew from the past,” said head coach Jake Plant. “Our intention is to do the same. Grow again from last year and to try to improve our standings in the conference and try and win it.”

One potential area of focus for Plant could be to hone the technique of his offensive weapons.

The Panthers’ strategy for 2018 did not always spawn promising results, as four of their matches ended as scoreless ties.

Despite allowing the second-fewest goals and shots on goal under Plant in his first season as head coach, these lows did not have an outsize effect on the leverage gained on the defensive side of the ball.

Even when the shots on goal were off target, or absent altogether, senior Sara Teteak provided her teammates with the security of knowing that they could go up on opposing teams without ever having to go down.

Teteak tied Tennessee-Martin junior Erica Myers for the most shutouts in OVC matches and the second best save percentage of any OVC player.

Those players who did indeed manage to deceive Teteak formed an exclusive bunch, as she allowed fewer than a goal per game on average.

Between today and a year ago, three players graduated from Eastern and another five transferred to other schools.

This deluge of exits has been countered with a collection of recruits, including Faith Davies from the University of Illinois Chicago, Ali Hosey from Parkland and Kenzie Balcerak out of Muskego High School in Wisconsin.

Blazing a path to a Wisconsin State Championship, Balcerak, in the third round of the tournament, may have served up a sample of what she could potentially add to an offense that found few scoring chances.

Balcerak shifted to her right to bypass two Kenosha Bradford defenders. Three seconds later, two more defenders converged on her, one colliding into her left shoulder, the other on her right.

As these defenders collapsed on Balcerak like elevator doors; she found a narrow passage between them, giving her just enough space to make it into the penalty box for a shot on goal.

Balcerak surveyed the ground out in front of her and, without hesitation, launched the ball into the corner of the net to all but ensure their hopes of reaching the semifinals of the tournament.

Having been redshirted her freshman year at UIC, Davies did not participate in any one of the 19 games for the Flames. Davies played a little bit of everything in high school, which may provide a fair amount of insurance to a team entering the season with one fewer player than the one preceding it.

Eight outgoing players on a roster of 22 may seem like a lot, but the program has typically lost about seven or eight players who graduate or transfer before the next season.

But with the nucleus of last season’s squad still intact, this season may afford them a window in which they can officially bury the painful recollections from that early November day.

“We graduated three very good seniors, but what we’ve found over preseasons so far is that we’ve brought in five or six very, very good newcomers,” Plant said. “So comparable. There’s differences, but in terms of the core group that can help us get back to the tournament, they are still here.”