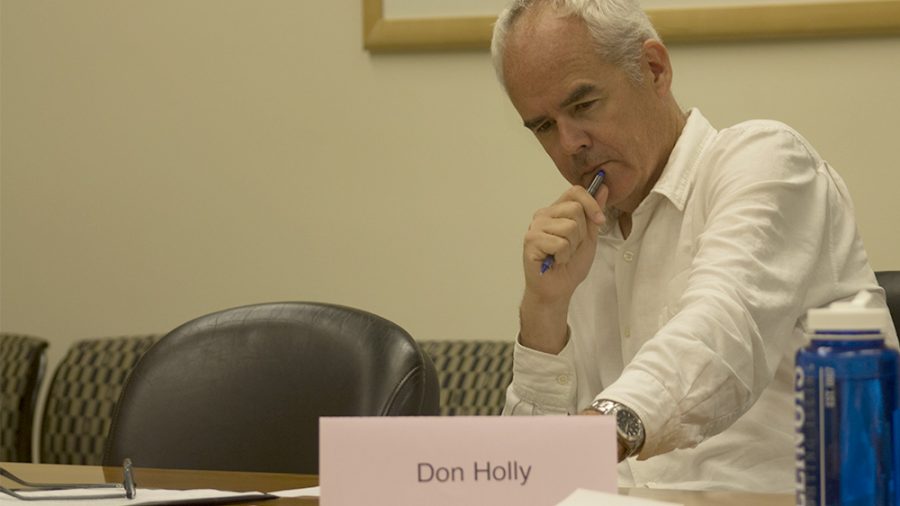 Don Holly, professor of anthropology, was one of the members at the Faculty Senate meeting at Booth Library Monday afternoon.

Eastern’s Vice President of Academic Affairs Jay Gatrell said that fall enrollment numbers on campus were “very positive” and that it is “going to be a great fall in terms of headcount”, during his provost’s report to the Eastern Faculty Senate on Tuesday.

Gatrell said he could not give specific numbers on enrollment until the 10th day figures are released, but he, along with the members of the senate, seemed very pleased with the news that once again total headcount at Eastern appears to be on the rise.

In 2018 the total headcount for students enrolled both on and off campus was 7,526 a rise of 7.06 percent from the year prior. On campus enrollment made up 5,082 students of the total enrollment in 2018.

CC Wharram, the chair of the senate, said Gatrell’s report on enrollment was “very much so” encouraging to hear.

“I think everybody has a sense that things are going well,” Wharram said. “We may not know the numbers, but you can feel the energy on campus and you can see the numbers; the parking lots are much, much fuller.”

Gatrell also announced on Tuesday that Eastern will be adding a four-year nursing degree program that was approved earlier in the afternoon to move forward to a board of trustees vote on Sept. 1, the CAA will also discuss the approval.

Eastern already offers a RN to BSN program online that helps those who already have their nursing degree from a different school to spend two years at Eastern earning their Bachelor of Science in Nursing degree, but what Eastern will now be adding is the beginning portion of that program.

Gatrell said Eastern expects a headcount of 175 to 180 students per year in that program and anticipates to graduate 60 to 70 of those students every year.

The senate also voted to elect another member to serve a term in the absence of former senate member John Tony Oliver, who had to leave his position on the senate after he took a position as an associate dean of the department of Kinesiology, Sport and Recreation.

The senate voted to fill Oliver’s seat only until he was eligible to return.

All of the senate members were in agreeance that they were setting a precedent of what to do when a member of the senate temporarily moves into an administrative position and is therefore no longer able to serve on the senate.

There was also universal agreement that the debate surrounding the newly set precedent had less to do with Oliver and more to do with precedent in general. Senate member Dawn VanGunten said it was “not about personality, it’s about policy”.

The senate eventually voted to hold an election for just a one-year term in Oliver’s absence, setting the precedent that when a senate member leaves for a temporary administrative position, their senate seat will be held for them until they return.