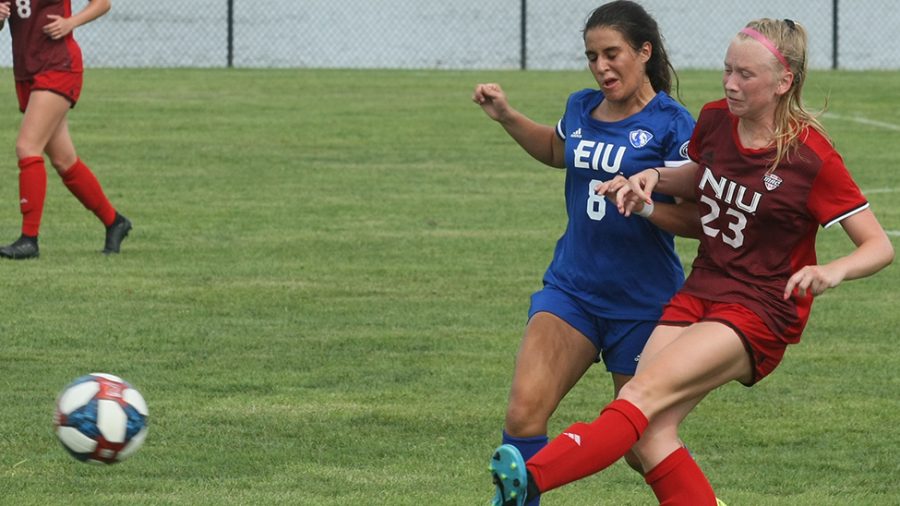 Dillan Schorfheide | The Daily Eastern News Eastern forward Pilar Barrio bumps a defender to try to get the ball back during the women’s soccer team’s 1-1 tie with Northern Illinois Friday at Lakeside Field.

The Eastern women’s soccer team opened up the year with a 1-1-1 record in its three exhibition matchups, so the preseason seems to come out to a wash.

Frankly, 3-0 or 0-3 would not have given much more indication as to how the season will play out.

That is not to say these games are not valuable, but simply looking at overall results will not paint a solid picture of the team.

Take Evansville, for example: Just two days ago, the Panthers took down the Aces by a 2-1 tally after leading for a majority of the game.

The first half appeared to be all Eastern, almost completely controlling the pace and securing the only goal of the first 45 minutes, so you might be tempted to believe the Panthers have a serious leg up on Evansville talent-wise.

Well, last season, Evansville hosted Eastern in the preseason and got a 15-2 shot advantage over the Panthers en route to a 1-0 win, but the Aces still managed two fewer wins and four more losses than Eastern overall last year.

One game clearly will not define a whole season, but three games to shake off some rust could have a huge impact moving forward.

Eastern brought back over half of its roster from last season, including its top-five point-getters, so instead of having to rebuild an entire pot of chemistry, all the Panthers have to do is reignite that flame.

A 4-0 loss in the first exhibition game against Northern Iowa might have helped light that fire, and the two-game response could bode well to start the year.

Last season, Eastern secured just one win in its first seven games but surged during conference play to mark the first time since 2013 that the team put together an above-.500 OVC record.

With the roster continuity and preseason building blocks, there is no reason Eastern cannot repeat this feat barring a production drop-off from individual players, but the exhibition matches did not seem to point to that either.

Senior Lexi Ketterhagen recorded the lone goal against Northern Illinois while juniors Itxaso Aguero and Pilar Barrio netted one goal each against Evansville, putting three of last season’s top-five scorers on the preseason board.

The other side of the ball seemed fine as well, as senior goalkeeper Sara Teteak allowed zero goals in two full halves of work over the weekend.

Maybe all of these exhibitions are a glimpse into how the team looks to replicate and build upon a successful 2018 campaign, but the 1-1-1 record does not paint that picture without the finer details.

All in all, do not put too much stock into the preseason.

Just wait until Friday when the Panthers head to Ball State to get the real win-loss column started.