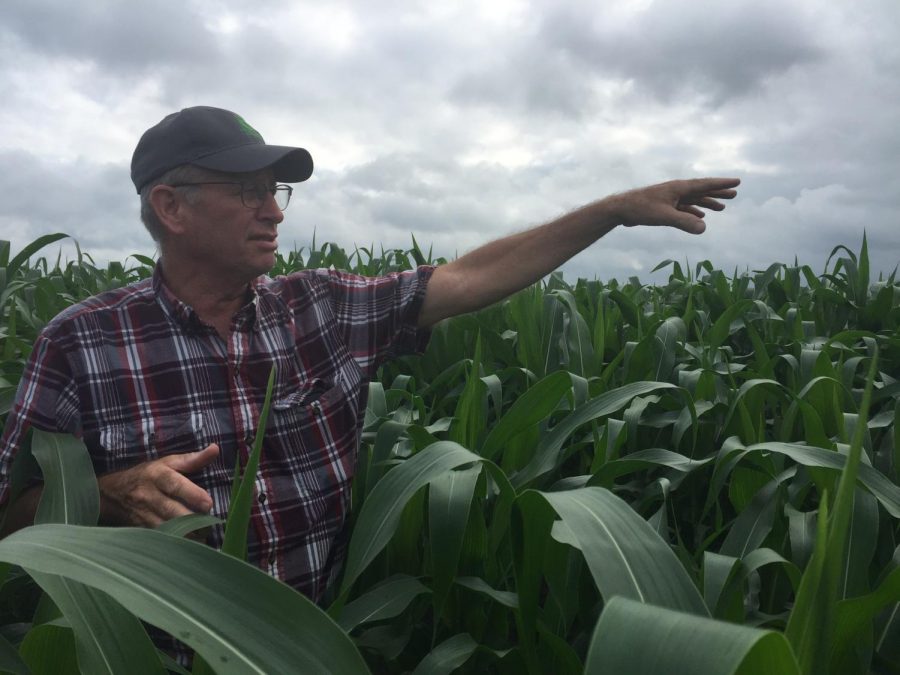 Alan Metzger, a Charleston farmer, looks over one of his cornfields on July 16. Metzger said areas in the field that once had puddles of rain bear corn stalks shorter than others.

Under a cloudy gray sky on a humid July morning, Alan Metzger, a Charleston farmer, scans his cornfield among the stalks.

He points toward the stalks that are lagging behind in growth because of flooding. He said it is impossible for people driving by to see just how much the excessive rain has affected the crops in Coles County. One must actually walk in the field to get the full picture.

“When you drive along the road in a car … the outside rows of the fields look pretty good,” Metzger said. “But if you get up over the top of the crop and look over the field, you still see those spots in the field that are too wet, that are shorter, that aren’t that dark, green color that you’d like to see during this time of the year.”

According to the Associated Press, the USDA declared an agriculture disaster on Aug. 8 in all Illinois counties because of the flooding. Now, Illinois farmers can take advantage of disaster assistance programs, according to the USDA.

Tonya Eich, manager for the Coles County Farm Bureau, said the Midwest flooding has affected everyone in the agriculture field—from the chemical companies to the seed companies to the truck companies.

“Anything that has to do with the agriculture field has felt the wrath of the rain,” she said.

Eich said after reading reports and speaking with local farmers, she believes the spring of 2019 has been difficult for farmers, but she expects the harvest to be even worse.

She said farmers are used to following a somewhat strict schedule when it comes to planting and harvesting, but the flooding has brought everything to a halt.

The time to plant each crop varies by each plant and which hybrid and seed company the farmer uses, she said.

Metzger said because of the flooding, Illinois farmers experienced setback after setback.  After May, farmers lose yield potential.

Soybeans are usually about two feet tall by July 1, Metzger said. By mid-July, he said soybeans in Coles County have varied between just a few inches to two feet tall.

Eich said in addition to the harm flooding does to the U.S. agriculture field and economy, it also takes an emotional toll on farmers everywhere.

“Amy Rademaker from Carle (Foundation Hospital) is coming down to talk (with farmers) in August about how to deal with mental health,” Eich said. “They’re stressed. With stress comes mental health.”

As part of Rademaker’s visit, Eich said attendees would participate in an eight-hour mental health first-aid training course. The purpose of the training is to help people identify signs of struggle with mental health and how to get them to the available resources.

Metzger said his job is like anyone else’s in that having zero control over one’s work leads to a lot of stress.

And when it comes to farming, he said a farmer can look down on his or her crop, estimate the yield and feel good about the work he or she has done to get thus far. At this time, farmers all over Illinois and the Midwest are looking down at their crops and cannot feel that way. They have little control.

For fellow farmers struggling through the flooding, Metzger said talking about it lifts a heavy burden.

“Talk about your issues with someone. Don’t leave it bottled up inside. Don’t let it fester,” he said.