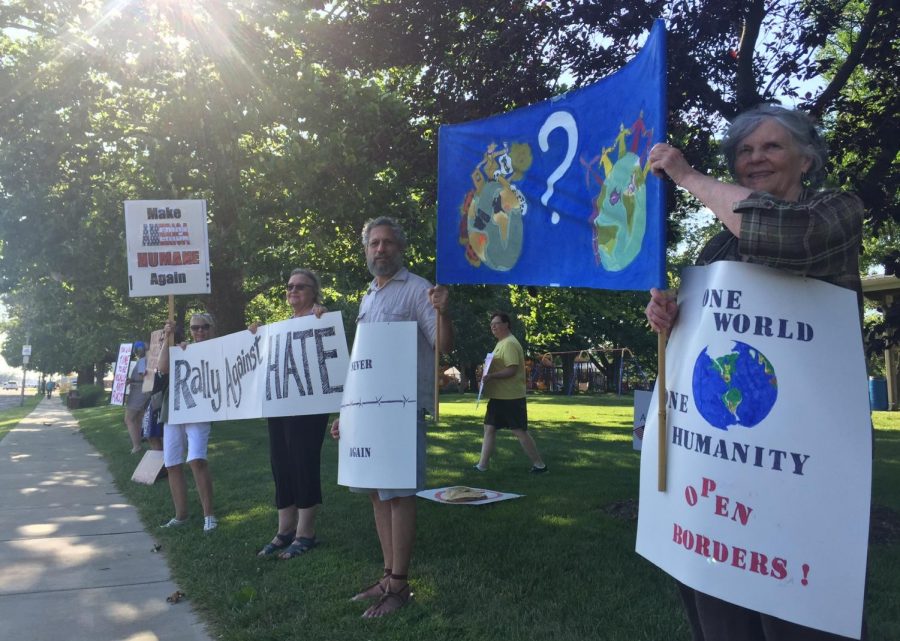 Members of the Coles County community carried signs and lined up near Lincoln Avenue to protest immigration policies and white supremacy at Morton Park Thursday evening.

Mathematics professor Charles Delman (pictured second to the left holding up the blue sign) said he was protesting the current conditions regarding immigrant families at the Mexico-U.S. Border and humankind’s abuse of the environment.

Delman said the separation of immigrant families and the placing of children in detention centers is intolerable, comparing them to “concentration camps.”

“Our current government is off the rails. They are treating people in a way that is completely inhumane; it’s completely unjustified,” he said. “It’s basically, we have concentration camps. This is fascism in America and we absolutely can’t put up with it.”

According to the National Immigration Forum, the separation of immigrant families happens because parents are charged with illegal entry at the border and children cannot be criminally prosecuted.

Additionally, federal courts understand the 1997 Flores Settlement Agreement, which regulates the conditions and handling of children at the border, to require that they be detained no longer than 20 days, according to the NIF.

She said early in July, white supremacist messages bearing swastikas and the words “White Power” were distributed in plastic bags tied down by rocks at Charleston areas. This is one of the chief reasons the group came out Thursday to protest, Wilson said.

The mere fact that one or more persons would scatter the hate-filled messages was shameful enough, but what Wilson said concerned her more was the positive reception she saw on social media.

“We want to encourage people to think about what’s going on and speak out about it, that it’s no longer enough just to passively be non-racist, but that, you know, you have to stand up and voice your opinion and your objection to things that are going on locally and nationally,” Wilson said.

Brian Reardon, a co-chair of the Illinois Green Party Executive Committee, said the protest group at Morton Park got established mainly through word of mouth.

He said he brought extra signs, hoping those passing by would pick one up and join the protest.

His sign read “Laundry is the only thing that should be separated by color.”

Reardon said he and friends had the intention of coming out to protest before President Donald Trump posted tweets directed at four Democratic congresswomen of color on Sunday, telling them to “go back” to their familial countries. This inflammatory revelation “fell into our schema,” Reardon said.

“The only reason those ladies were targeted is because of the color of their skin. There are white male congressmen who are naturalized citizens; nobody’s telling them to go back anywhere,” he said.

In terms of taking the necessary step to change local and national legislation, Reardon said the first one is to be outwardly vocal.

Beyond that, he said people can write letters to editors for publication, protest publicly and call government representatives.