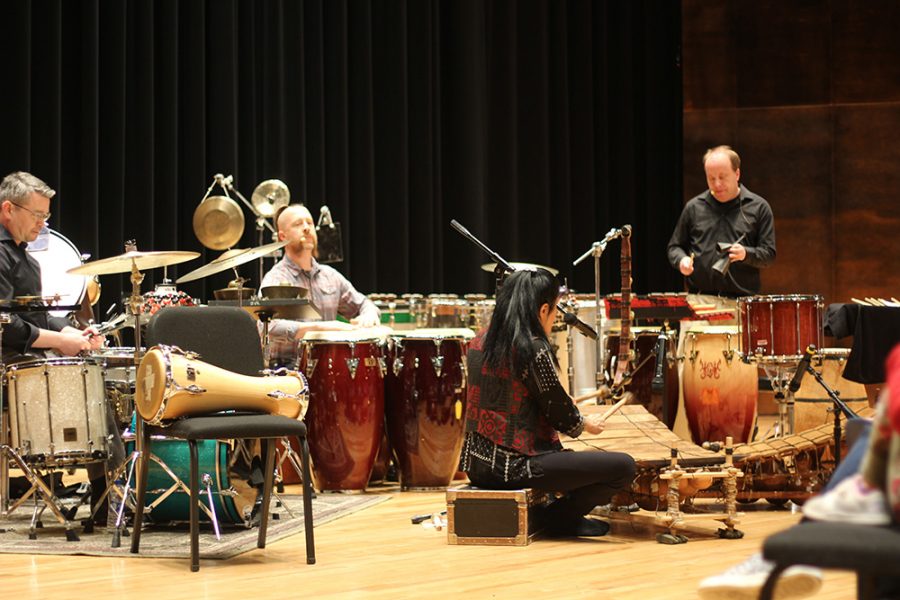 Valerie Naranjo, a Saturday Night Live percussionist, joins the West Percussion Trio to perfom a show in the Dvorak Concert Hall in the Doudna Fine Arts center on Tuesday evening.

Before the show began, Naranjo and the Africa->West Percussion Trio all discussed the different songs that were going to be played and how they got to play together.

This is the trio’s third time playing with Naranjo. They said they try to get together whenever they can when she is not on the road. The trio consists of Jamie Ryan, Josh Ryan, and Ryan Korb, all percussion professors.

Naranjo said she has known the trio and that they have connected through both music and life.

Josh Ryan said practices tend to be short, but they have to find out how the instruments will sound together.

“A typical day of rehearsal for these shows aren’t that long, but when they first started preparing for the show they had 12-14 hours of practice because they had to find out how the instruments were all going to go together,” Josh Ryan said.

Naranjo described music as a combination of sounds by different instruments.

Guun is one of the song themes that were chosen for the performance; it is played for funerals and tends to be about death.

When playing a song from this theme, the percussionists’ facial expressions started to change, and after the performance, the group opened the floor to the audience to answer questions they had.

One audience member asked how Naranjo gripped the mallet she used to play the gyil. Naranjo said her music teachers tried to get her to hold the stick the regular way but it hurt too much, but after moving on to a different teacher she positioned her hand in what is called the Western Match Grip.

Naranjo was also asked what difficulties she has faced in music because of her gender.

She said when growing up she was respected not as a famous person but as an artist. She was fired from a band for being the girl out of the group, but after sitting back and thinking about who she really was she gained an opportunity to work with Saturday Night Live.

Naranjo has been at Saturday Night Live for more than 20 years.

She said one thing she loves about the job is that it gives her plenty of opportunities to travel around the world and perform.

Jackie Wilen, an audience member, said she came to the show after seeing an article about it and had a good time while there.

“I enjoyed the show very much,” Wilen said. “It was different because the instruments that were used isn’t something you see everyday.”

The West African Trio said they hope to perform more with Naranjo in the future.

Naranjo said she will teach a masters percussion class to percussion students at Eastern following a lecture on “Topics in African Music Exploration and Women’s Studies.”

Naranjo said she hopes many students come out and enjoy the class and lecture that is free for students to attend. It well be held on Wednesday at noon in the Dvorak Concert Hall.