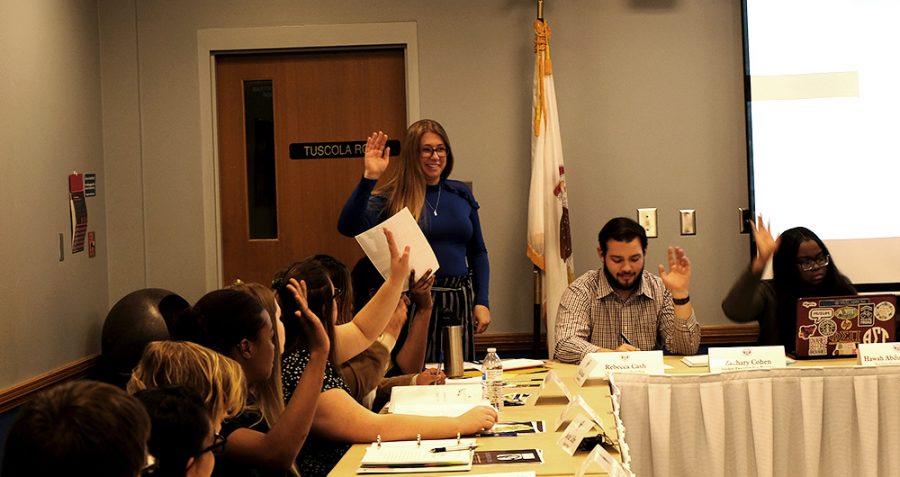 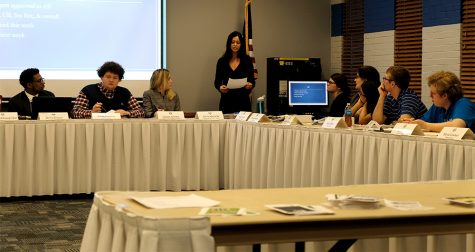 Student Senate voted to table all five of the Apportionment Board budget allocation bills to next week during its Wednesday meeting.

These are the amounts the Apportionment Board is asking Student Senate to release for these organizations’ 2019-2020 budgets: $139,227 for University Board, $186,223 for the Student Recreational Center, $44,000 for student government and $40,560 for Apportionment Board.

The final bill the Student Senate will vote on during the next meeting is for the total allocation of funds for each of the organizations, which amounts to a total of $410,010.

Alicia Matusiak, executive vice president of student affairs, said the only organization that did not get a budget cut was Apportionment Board.

If Student Senate votes to approve one or more of these bills, she said the decision goes to Lynette Drake, interim vice president for student affairs, for final approval.

Student Senate also voted unanimously to approve budgets for the EIU Senior/Alumni BBQ, the two budgeting events (How to beat the Game of Life and Ramen, Hot Dog, Chick-Fil-A), the Survival Kits for finals week and the Earth Week events.

These are the amounts the Student Government Association is releasing for the event budgets: $1,134.94 for the EIU Senior/Alumni BBQ, $152.27 for the two budgeting events, $302.83 for the Survival Kits and $258.32 for the Earth Week events.

The most expensive costs in the bill for the barbeque were the T-shirts and building service worker cleanups, according to the bill.

The alumni relations committee is purchasing 100 shirts for the barbeque; each shirt costs $6.25, so the total cost is $625. The cost for BSWs to clean up after the event is $200.

Otherwise, the rest of the amount includes costs for stickers, decorations, parking, UB productions and marketing, according to the bill. The Hilltop Nursing and Rehabilitation Center is providing the food.

When it comes to the budgeting events, it would cost a total of $67.51 for candy and Panther Catering for the How to bet the Game of Life event, according to the bill. It would also cost a total of $84.76 for the Ramen, Hot Dog and Chick-Fil-A event.

The rationale of the two events the business affairs committee is holding is to spread awareness through budgeting events for Eastern students, according to the bill.

When it comes to the Survival Kits, Matusiak said UB was originally going to cover half of the $302.83 the academic affairs committee asked Student Senate to release, but UB revealed to the senate later that they were short on funds to do that at the time.

Instead, UB offered to cover all marketing and marketing distribution if Student Senate agreed to release the full $302.83 to the committee, which Matusiak said was fine, seeing as student government had plenty of money reserved.

For the Survival Kits, the committee would purchase three packages of pencils ($19.99 per package) and a variety of different snack items, such as four packages of granola bars ($11.38 per package), according to the bill. Other items to be included in the survival kits include peppermints, jolly ranchers, fruit snacks and Dum Dum suckers.

The committee would also purchase two packages of paper bags ($11.59 a package).

For the Earth Week events, the university enhancement committee would purchase items for Trash Pick Up Day, Kids Info Day and the Pledge and Think Tank, according to the bill. Also included in the bill was $20 to cover a Panther Shuttle survey gift card.

The university enhancement committee would purchase garbage bags, gloves and water (total of $32.65); construction paper, biodegradable paper confetti, seeds for flowers, a tub, and Earth Day stickers (total of $55.92); and reusable bags and a pledge board for the Pledge and Think Tank (total of $149.75).