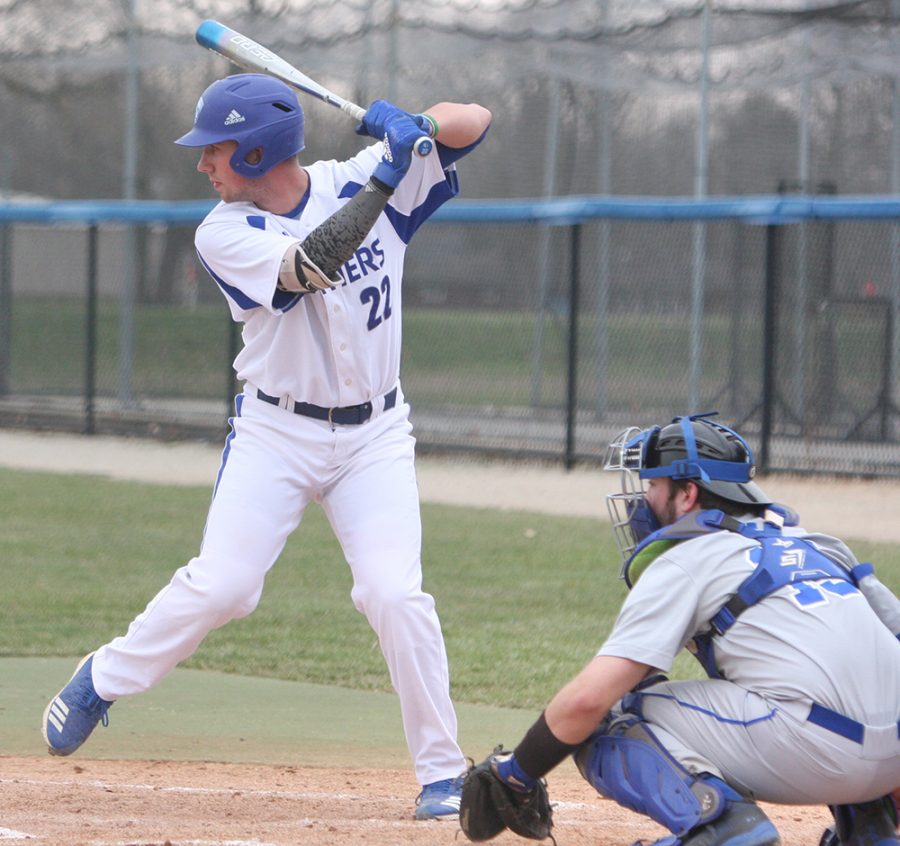 Eastern’s Jimmy Huber loads in his batting stance during the Panthers’ 11-1 win over Illinois College Wednesday at Coaches Field. Eastern improved to 15-14 with the win.

The Eastern baseball team bounced back in a big way yesterday with a run-rule victory over Illinois College, 11-1.

The Panthers sent freshman Jesse Wainscott to the hill to start the game, and he did his part, going five innings, surrendering just one earned run and five hits in the process.

Wainscott gets his second win of the year in just his third start, pushing his ERA down to 2.63 this season, the lowest mark of any pitcher that’s been in for at least nine innings.

Meanwhile, the Blues deployed a bullpenning strategy and pitched no player for longer than 1.1 innings.

All 11 of Eastern’s run came off just three of Illinois College’s nine pitchers that took the mound, with senior D.J Ramos surrendering four and freshman Kolten Bottom giving up five in just 12 pitches.

It was still a slow offensive start through the first two innings for the Panthers, but Eastern broke it open in the third with a two RBI single from senior Hunter Morris.

Eastern did allow a run in the fourth inning, but the Panthers came right back with two more scores of their own off the bats of freshman Grant Emme and junior Matt Waznis.

Head coach Jason Anderson decided to pull the plug on Wainscott after five innings and brought in senior Carson Haws, who went three innings with only two hits allowed and zero runs coming through.

Haws got his first save of the year with three strikeouts in the outing.

Back with the bats, Morris got into the action again to help cap off the Blues with a three-run shot in the bottom of the eighth inning to extend the lead to eight.

Two runs later, and the game was called after the Panthers managed to take a 10-run lead.

Morris and Govern both managed to make their ways around the basepath three times a piece, with Morris pouring in five RBIs to boot.

That pushes Morris to 27 RBIs on the year, a team-high figure, while Govern sits right behind him with 26 as well as a .336 average and a .576 slugging percentage.

Emme finished two-for-three on the day with two runs and an RBI himself, moving his average to .321 with 27 hits.

The Panthers move to a 15-14 record and return to the diamond on Friday at 4 p.m. to kick off a three-game OVC series with Belmont.