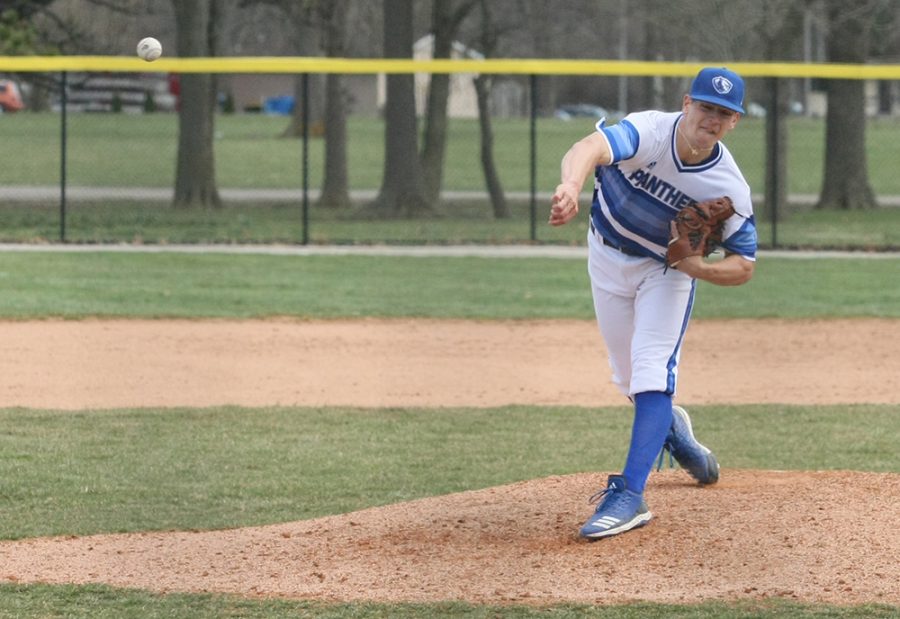 Eastern’s Michael YaSenka fires a pitch in the Panthers’s 10-9 loss to Southeast Missouri on Sunday. Eastern beat the Redhawks 9-6 on Monday.

Eastern’s baseball team had to wait until Monday for the last two games of its series with Southeast Missouri, but the Panthers finished the series with two wins.

Heavy rain Thursday into the weekend pushed the series back to Monday, and Eastern’s pitching performed well and made clutch performances to secure the wins.

Eastern’s starting pitching staff has been solid so far this season, but the relief pitching has been shaky and inconsistent, letting opponents make comebacks at times this season.

In both games Monday, especially the first game (a 1-0 victory for Eastern), the relief cast tightened up and kept Eastern’s leads safe.

“These were really team wins, but I was most proud of the way the bullpen held leads both games,” said Eastern head coach Jason Anderson. “I challenged them, and they really stepped up.”

The lone run for Eastern in its first win came in a small way.

Ryan Knernschield reached first base on a fielder’s choice (Hunter Morris out at second base), but Jimmy Govern was able to score on the play.

Behind the lone run was the starting pitching of Spenser Dexter and the relief pitching of Josh Cooper and Alex Stevenson.

Dexter (3-1) lasted six innings on the mound, only giving up six hits and two walks, while striking out nine batters.

With just a one-run lead to maintain for three long innings, Cooper pitched well, only giving up one hit and one walk in his two innings of action, striking out three batters of his own.

Stevenson earned his first save of the season, pitching the whole ninth inning while giving up only one walk and striking out one batter.

Eastern went on to win the second game 9-6, and at one point, it looked like the Panthers might have given up another lead.

The Panthers held a 9-3 lead after the fifth inning, and with the second game of the doubleheader only going seven innings, time would have run out fast for the Redhawks.

But they made the most of the little time they had, as the Redhawks scored three runs in the sixth inning to momentarily threaten Eastern’s security blanket.

Tyler Jones pitched the fifth inning and onward, giving up three runs (only one was earned) on four hits and one walk. He also had one strikeout.

The only run Jones had tacked on to his ERA was the first run of the sixth inning, scored on a single.

Other than that, Jones pitched a 1-2-3 seventh inning and struck out the final batter of the game to earn his first save of the season.

Anshutz got the win, staying perfect with a 5-0 record.

“Foster has really stepped up and given us a chance to win games on midweek and Sunday,” Anderson said. “He threw a ton of pitches last week, so we got him out early today.”

For the first game, seven Panthers each had one hit as both teams only recorded seven hits in the low-scoring contest. In the second game, Tyler Tesmond went 3-for-3 at the plate, and Jimmy Govern and Grant Emme each had two RBIs.

The Panthers face Illinois State Tuesday on the road, with the first pitch set for 5 p.m.