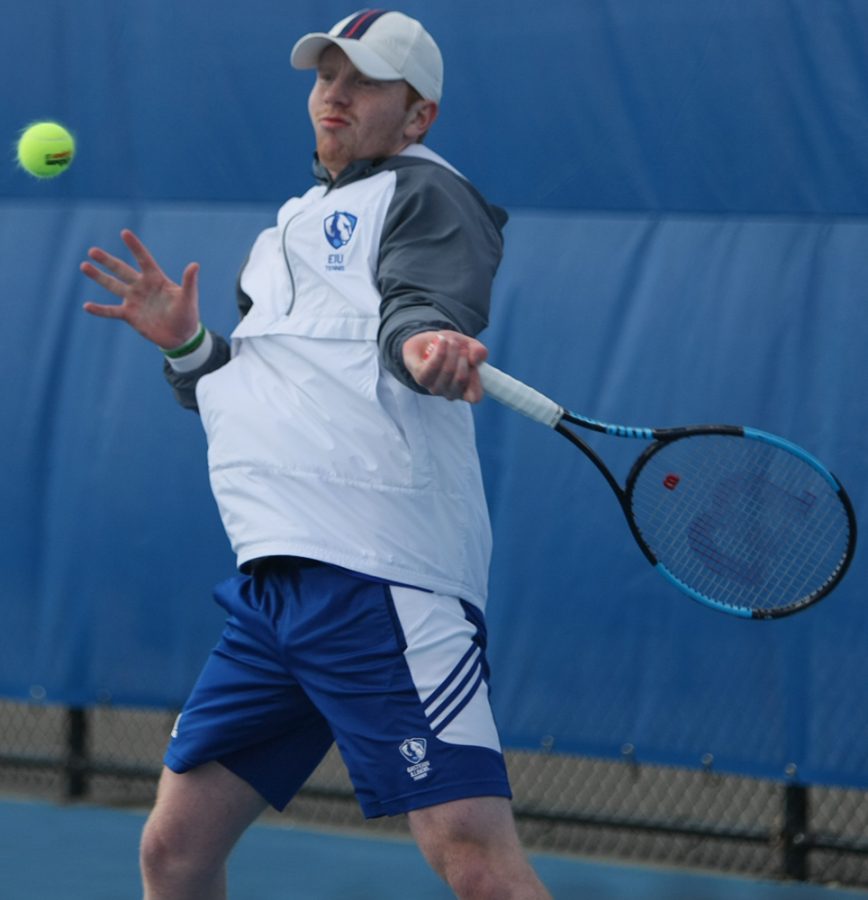 Freddie O’Brien rears back to return a hit in his singles match during Eastern’s 6-1 loss to Jacksonville State at the Darling Courts Friday.

The Eastern men’s tennis team didn’t get the results it wanted in its first Ohio Valley Conference match of the spring season.

The Panthers hosted Jacksonville State Friday, and the Gamecocks knocked off Eastern 6-1.

Jacksonville State has been a problem for this Panther squad. Since 2008, Eastern has yet to pull out a win in 12 matches.

The Panthers did clinch the No. 2 doubles slot with junior Freddie O’Brien and sophomore Daniel Hernandez winning 6-2.

Juniors Gage Kingsmith and Gretjan De Wilder fought down to the wire, but came up short at No. 1 doubles, 7-6.

Jacksonville State claimed the No. 6, No. 2 and No. 3 singles positions, and Eastern couldn’t catch up to make a comeback.

Hernandez was the only Panther to secure a point Friday with his win at No. 4 singles. Hernandez beat Alexander Vishnevskiy in three sets winning 7-6 (7-3), 2-6, 10-5.

With the Gamecock’s victory, it pushes them to 8-4 overall and 1-0 in the OVC. This also snaps a four-game losing streak for Jacksonville State.

With more conference matches to come later in the season, sophomore Logan Charbonneau said this match gave the team something to watch for.

“The match gave us a good bar in term of what we need to work on going into more conference matches,” Charbonneau said.

O’Brien fell in No. 1 singles to Aljaz Kaplja, and sophomore Mike Jansen lost to Joaquin Vallejo, 6-3, 6-3. Kingsmith lost his match with Guillermo Agost 6-3, 6-1.

De Wilder and Charbonneau were on the short end of the stick in their matches at No. 5 and No. 6 singles.

Eastern has another upcoming OVC match against Tennessee Tech Saturday at 12 p.m. and a non-conference match against Alabama A&M Sunday at 1 p.m.