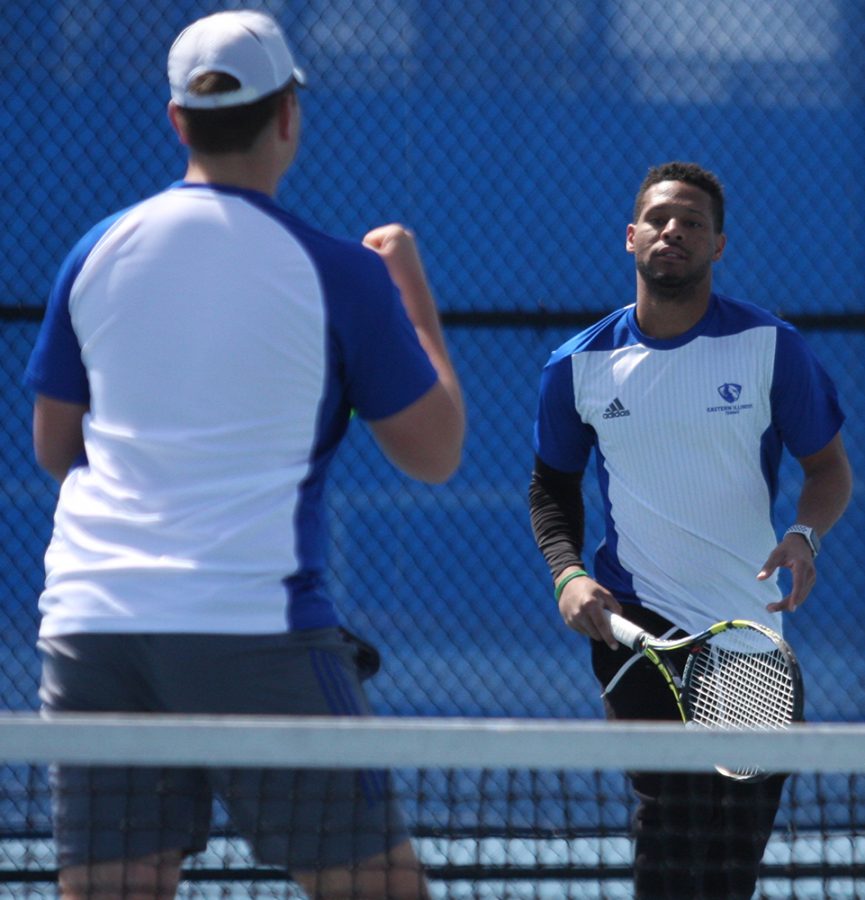 File Photo | The Daily Eastern News Gage Kingsmith (left) and Jared Woodson celebrate a point they earned during Eastern’s 7-0 loss to Belmont in March 2018 at the Darling Courts.

After earning win No. 10 last weekend, the Eastern men’s tennis team looks to build on that with its first home conference match.

The Panthers start the conference slate against Jacksonville State at the Darling Courts Friday at 2 p.m.

Eastern has tied the most wins the program has seen since 2009 with 10, after defeating Rose-Hulman last weekend.

This is a match the Panthers would like to secure because the Gamecocks knocked Eastern out of the Ohio Valley Conference tournament last season in the first round.

Interim Director of Tennis Chris Tolson gets his first taste of conference matches in the OVC, and it has him ready to go.

“I am excited to get our conference season started,” Tolson said. “I feel our team is in a good place mentally and physically. We are getting better every day so hopefully the guys come out with energy in double. If we are able to do that our guys will have a chance to beat Jacksonville State.”

Eastern has seen multiple players produce solid numbers this spring season, including junior Freddie O’Brien leading the team with 11 wins at No. 1 singles.

Others are contributing well also: sophomore Mike Jansen is 8-6 at No. 2 singles, and sophomore Daniel Hernandez has nine wins at various singles positions. Sophomore Logan Charbonneau also racked up nine wins in other singles positions, which is six more than he had last year.

For Charbonneau, the team’s goal is to win the OVC championship, and a match like this will help the team’s cause.

“It’s a big one for sure,” he said. “These matches determine our seeding in the tournament so obviously we’re trying to go in with our best foot forward.”

A big thing the Panthers hope to get first is that doubles point. That’s been something the team has stressed on how important it is to clinch.

Charbonneau and O’Brien are 12-1 as a doubles team, leading the team, and Hernandez and Jansen trail them with eight wins as a tandem.

Looking at Jacksonville State, the Gamecocks started the season with seven consecutive wins, but have lost four straight since that long winning streak.

Jacksonville State still comes in with a comfortable 7-4 record, and a 5-3 record on the road. But, for the Panthers, they are 2-0 at home which could pay big dividends.

The Gamecocks have four players over .500, one of those being sophomore Joaquin Vallejo who is 7-4 at No. 2 singles.

After the match against Jacksonville State, Eastern has six remaining matches on the year, three of those being conference matches.