Marcos talks about his pre-race ritual, its origins 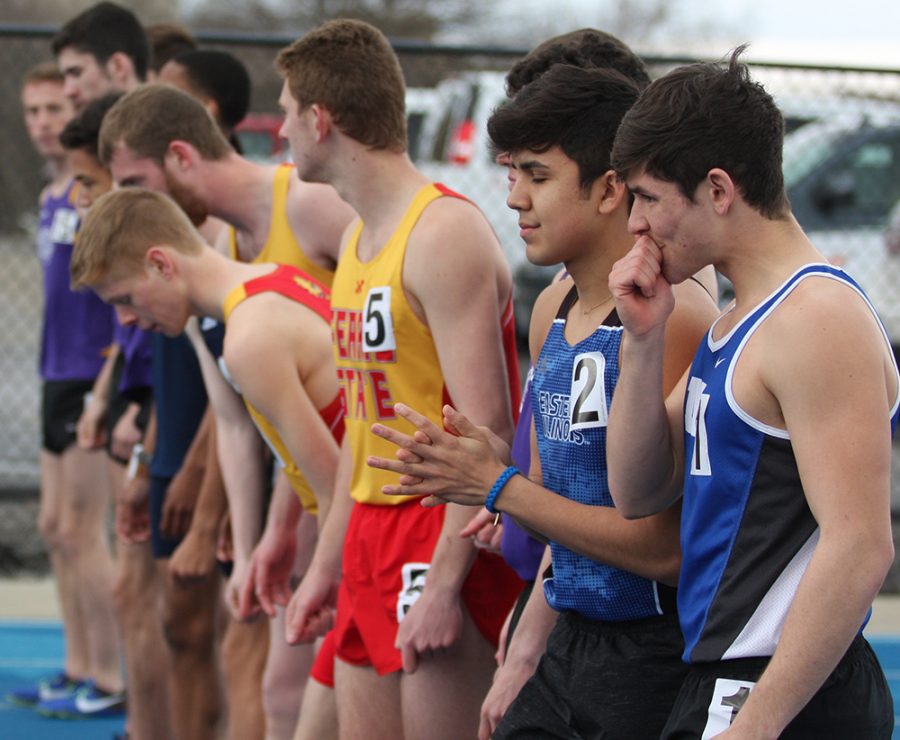 File Photo | The Daily Eastern News Jaime Marcos is a sophomore cross country and track and field runner at Eastern. Before almost every race, he relieves himself to get rid of the nerves for the race and to know the race is about to start.

Jaime Marcos could see the church, even though it was nearly 200 miles away.

As he strolled past Booth Library, turning his head toward a brick wall, he could see the bricks of the church’s structure before him.

Climbing up a flight of stairs, an image of the stairs to the church entrance flashed across his retinas.

He had just realized that nothing mattered, feeling as though, in a moment of abject despair, he had succumbed to his parents.

Retiring for the night at his Taylor Hall dorm, there was no motivation for school, an inability to shut his eyes and decamp on an eight-hour slumber.

The Fellowship of Christian Athletes meeting had ended. A fellow cross country runner invited the entire team for the meeting that night, but Marcos never wanted to attend, not after his senior year.

That final year of high school had been the worst of his life, he said.

Although his parents were not religious for his first 18 years, when a friend of Marcos’ mom selected them to be god parents, they immersed themselves in Roman Catholic beliefs.

Then they thought about including their son.

His parents wanted him to enroll in a Rite of Christian Initiation of Adults program, where Marcos would receive the sacraments of baptism, communion, reconciliation and confirmation.

“They did not care what I thought or what I said, it was like you are going to do this,” Marcos said. “I pushed and I did my best to fight it every single step of the way because it was like a nine-month program.”

He had no choice.

“I kind of just had to play the cards I was dealt and suffer, otherwise I would probably suffer more,” Marcos said.

He could not believe his parents were demanding this of him.

To begin with, there was little time in his schedule for the program.

Commitments to the Von Steuben high school Cross Country team filled his days, as meets commenced on Fridays and, on days when there was no competition, practices lasted until 6 p.m.

“That was probably the worst part, I was not in agreement with what I was agreeing to,” Marcos said. “As it was happening, you had to say certain things, or agree to certain morals, and although I was superficially agreeing with them because I had to in order to complete that part of the program, deep down I was rebelling every step of the way.”

He was confused by the church’s positions on abortion and same-sex marriage, taken aback just as much by the near obsession with miracles in the bible.

When it came time to decide on a university, Marcos rebuffed the scholarship offers from DePaul and Loyola, mere miles from his home in Jefferson Park, due in part to the trauma of being forced to attend RCIA classes.
Thoughts Run Amok
Jaime Marcos is always thinking.

Sometimes a little too much.

He will, during a race, fire up the juke box inside his head, thinking out the lyrics to some chosen tunes.

The song ‘All Star’ by Smash Mouth is a personal favorite.

Or, when in the mood for a little retro disco, the Bee Gees hit ‘Stayin’ Alive’ will come up on the playlist.

At the starting line, Marcos broods over the worst case scenarios.

What if he falls? What if his Nike Zoom Victories get tangled in the braches of a fallen tree limb? What if he slips and slides in the mud?

“It kind of freaks me out, honestly, but I mean, to prepare myself better, I just have to have confidence in all of the training we have put in, because its hundreds of thousands of miles that we do,” Marcos said.

This tendency to imagine all that could go wrong has been a byproduct of his parent’s child-rearing style, one free of confidence building.

He can be a rather anxious person, but the queasiness before a race eclipses all other stressors in his life.

The fear that rankles Marcos in anticipation of a meet makes him feel lethargic, sometimes even lazy.

To combat the skirmish arising inside of him, he will grab his black, one-gallon jug, which has the slogan “Finish on empty” plastered on it, in preparation for a ritual, one enabling Marcos to relax at the one place he strives for equanimity the most: behind the starting line.

So he gets down on one knee and urinates, his black Adidas shorts becoming drenched in the eight ounces of water consumed ahead of the race.

It began his senior year of high school, a tradition that joined his pre-race routine from then on.

At a race freshman year, his teammates recalled hearing a trickling sound, hesitant to pinpoint exactly where it was coming from.

After Marcos finished wetting his pants, he informed them of the source.

“I think it’s something that we can get our minds unfocused for a second, just like let loose, kind of be relaxed thinking it’s pretty funny and focus up and be ready to race,” said redshirt-sophomore Bobby Prescott.

Once the race has begun, Marcos is not vexed by the soppy shorts which, by the second mile, become dry, with the sun acting as an efficient blow dryer on the typical Friday afternoon in September.

“Its Jaime being a goof and just him doing his thing, so whatever floats the boat I guess,” Prescott said.

Prescott sports a pair of neon green socks every race, though he has not once thought about giving Marcos’ ritual a try.

“Nothing too crazy like him,” Prescott said. “I have never thought about it. I make sure I clear the system before the race. He is a pretty funny dude.”

In spite of the ritual’s value when it came to calming the tensions roiling inside his mind, it did not make it any less difficult to advertise his thoughts.

The side effects of the RCIA experience, and his parent’s unwillingness to hear out his perspective, left him expressionless.

“I was kind of pushed down in a lot of sense at home, pushed in the corner,” Marcos said. “That has just kind of built me as a person.”

They did not engage in negotiations with Marcos, snatching away his right to self-expression.
Growth and Recovery
Last December, a shin splint, exacerbated from running on an already injured ligament, turned severe, becoming what he suspects had been a stress fracture.

Out for four weeks, he entered the dark crevaces of his mind. Did he belong at Eastern? Would he ever get better? Should he transfer schools? Why not quit running?

The struggles to convey his thoughts to others, remnants of that senior year, emerged into the fold.

Marcos decided to sever communication with his teammates.

As a result, he staggered his meal times to avoid any overlap with those of his teammates, checking the messages on the squad’s group chat to determine their plans for that particular night.

He could not bear the thought of being noticed, unsettled whenever they crossed paths in the dining halls.

What was there to talk about? How, as someone absent from team runs, could he relate to the one topic they were sure to discuss?

Eventually, as the fracture healed and he returned to practice, Marcos began attending the dinner gatherings again.

By sophomore year, he gained, through the process of maturation, the skills to express himself more effectively.

The constant analysis in his brain, however, still remains.

“And I think that’s kind of rubbed off on me as I have grown up,” Marcos said. “I have just looked at things in a different perspective, from a lower standpoint kind of perspective versus people who are high up in the clouds.”