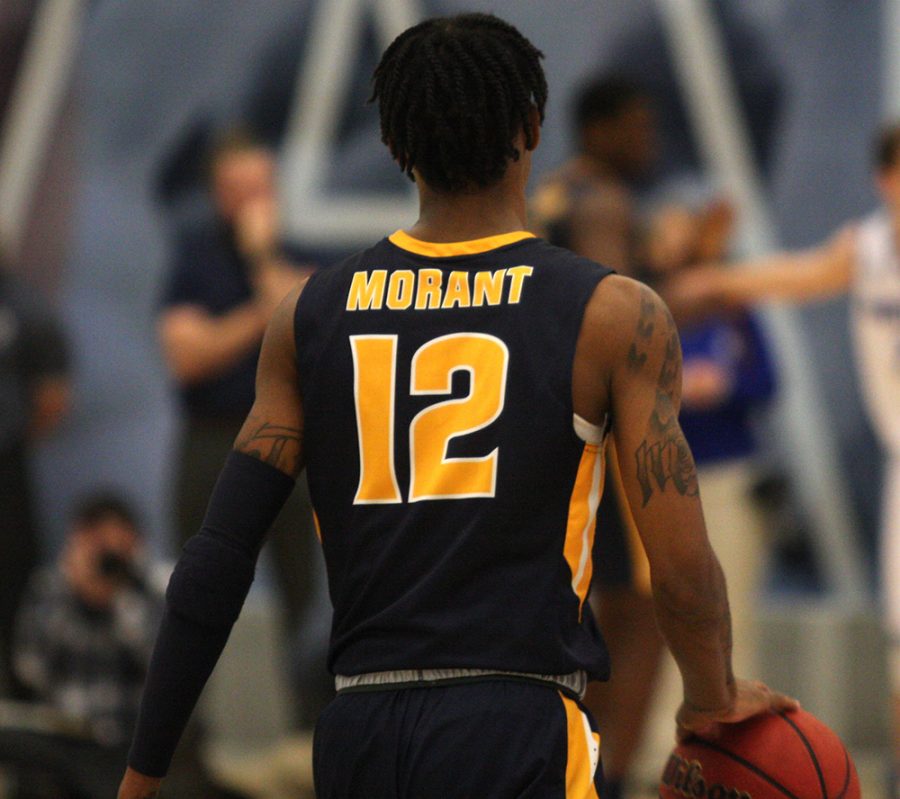 Murray State guard Ja Morant walks up the court in his team’s win over Eastern on Jan. 17. Morant and Murray State, along with Belmont from the OVC will compete in the NCAA tournament this week.

All the bidders doing Belmont’s work on Twitter can cheerfully watch the Bruins play in the NCAA tournament Tuesday.

After losing to Murray State in the OVC championship game, it was questionable whether the Bruins would make it in the tournament.

They certainly had the wins to do so: defeating Lipscomb twice and UCLA out in California.

But a lot of other teams were waiting on the bubble as well, and Sunday finally brought relief to those who were bidding for a two-bid OVC.

But now that Belmont is in the tournament, will it even get past the play-in game and get to the round of 64?

Will Murray State even get past the round of 64 themselves, having to face 5-seeded Marquette?

Both will have to rely on their stars to put up big numbers to have any chances of being bracket busters.

More than that, Belmont will need to abuse its versatility, while Murray State will have to have its supporting cast step up.

Belmont has flaunted a depth-filled roster throughout the season.

Dylan Windler, of course, leads the way with 21.4 points and 10.7 rebounds per game. When Windler is not having a good night scoring-wise, he still affects opponents by playing great defense and grabbing copious numbers of rebounds.

But therein lies the problem Belmont might run into: Windler having a bad game.

In Belmont’s first game against Murray State this season (on the road Jan. 24), Windler only had five points on 2-of-7 shooting. He did have 13 rebounds and four assists, though.

Even in the OVC championship game, Windler finished the game with 17 points, but he only had two points at halftime and finished shooting 1-of-7 from three-point range.

So, Windler needs to score and shoot threes well for Belmont to have chances to advance, but if he does have an off-game, the thing that could save Belmont is its depth.

The Bruins can also enjoy freshman Grayson Murphy averaging 9.8 points per game, while he leads the team with 204 assists on the season (6.6 per game).

But, while Belmont has seen its depth step up, Murray State has seen Ja Morant literally carry his team to the championship crown.

Yet, in the OVC title game against Belmont, only Cowart (11 points) and Brown (12 points) scored in double figures, aside from Morant’s game-high 36.

Buchanan finished that game with five points on 2-of-11 shooting (0-of-4 from three-point range).

Morant will most likely be heroic in however many games Murray State gets to play in, but the Racers’ first-round matchup against Marquette could be the Racers’ undoing.

Marquette boasts Markus Howard, who averages 24.8 points per game and leads Marquette with 35 steals on the season.

Morant had a great game against Auburn early in the season, and Auburn is led by two guards who are pretty good and just led the Tigers to an SEC title.

Murray State’s offense can be high-powered, but that requires anyone not named Morant to actually score. Plus, Morant may have his hands full with Howard.

Belmont can rely on its depth in its hopeful tournament run, while, conversely, Murray State, based on past performances, cannot rely on its bench.

Murray State will also need to make its three-point shots, and Belmont will need to use its height inside. Belmont’s height depends on if 6-foot-11-inch Muszynski is healthy to play at all or even at full strength.

So, for each team, the key players will be Windler for Belmont and Brown for Murray State.

Windler is projected to be a second-round NBA draft pick, so he will need to play like he is, after not out-performing his counterpart in Morant twice now.

Murray State does not have great size, so Brown, who was third in the OVC with 2.7 three-pointers made per game and at one point was the leader in three-point field goal percentage, needs to make his shots.

Out of both teams, Belmont has the best chance to advance, with or without a completely-healthy Muszynski.