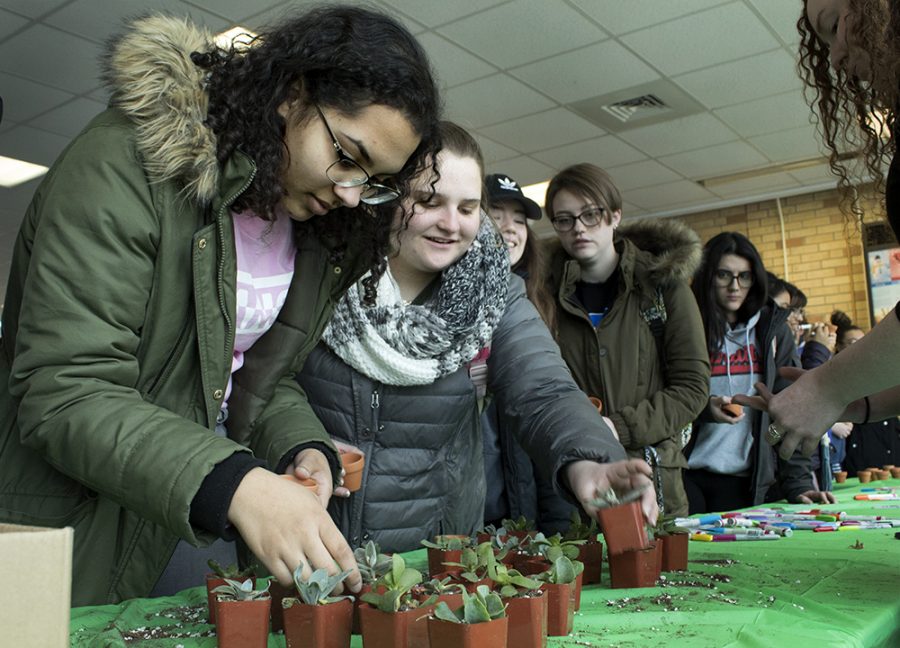 Special education majors Kendra Moore and Hailey Lowery, both freshman, are trying to pick out which succulent they would like to plant at the Martin Luther King Jr. Union on Tuesday afternoon. Hailey said she came to pick out a succulent because “[it’s] somthing little and somthing cute for my room.”

The University Board-organized event “Hug a Cactus” invited eager students to pick a cactus or succulent and some markers and draw designs for the pots Tuesday afternoon in the Bridge Lounge of the Martin Luther King Jr. University Union.

“You get to make a little pot and decorate it and personalize it and create a cute little home for your little spikey friend,” Mark said. “We have a bunch of different succulents and cacti.”

She said the smiles she sees from the students who have decorated their own “spikey friends” is reason enough for coordinating the event.

“We are hoping that people get to take them home and put a little green in their room and to put a smile on people’s face,” Mark said.

This is the third year the University Board has held the event, and she said turnout is always high.

“The first year we did it we worked with a company; then we took the idea and personalized it, and it has been our most popular event,” Mark said. “We usually run out of cacti before we run out of time.”

The line, full of Eastern students, was long, extending to the Panther Copy and Print Office.

Jacob Richmond, a senior majoring in history secondary education, said he came to the event because his friend really loves cacti.

“It is a pretty cool event,” he said. “I haven’t seen anything like this before, so it is (intriguing).”

Katherine Dams, a senior majoring in athletic training, said she came to the event because she loves cacti.

“I really thought it was cool to make your own cacti and decorate the pot. I know (the University Board) had events before where you can make stuff, but I have never gone until this year,” Dams said.

Taylor Steele, a sophomore majoring in biology with a concentration in pre-dental, said she came to the event because she saw the flyer around the university.

“I thought the saying ‘hug a cactus’ on the flyer was cute, and it was free plants, and I needed some plants for my room,” Steele said.

She thought the event was a great way to get into the spring spirit even though it is freezing outside, Steele said.

Jalisha Smith, a graduate student majoring in family and consumer sciences, said she came to the event with her friend who loves plants.

“The event was very different, but I would not have done anything like this if my friend did not want me to come with her,” she said.

Senior psychology major Edquitta Alexander said she did not know the event was going on.

“I came in here to study, but I saw all of these people in line and wanted to see what was going on,” she said. “I would make a cactus if the line was not so long and I did not have to study,” Alexander said.

Mark said she wants students to look forward to the upcoming events the University Board has coming up.

“Continue to come out and support our events. We do everything from comedians to little make-it-and-take-it events like today,” Mark said.