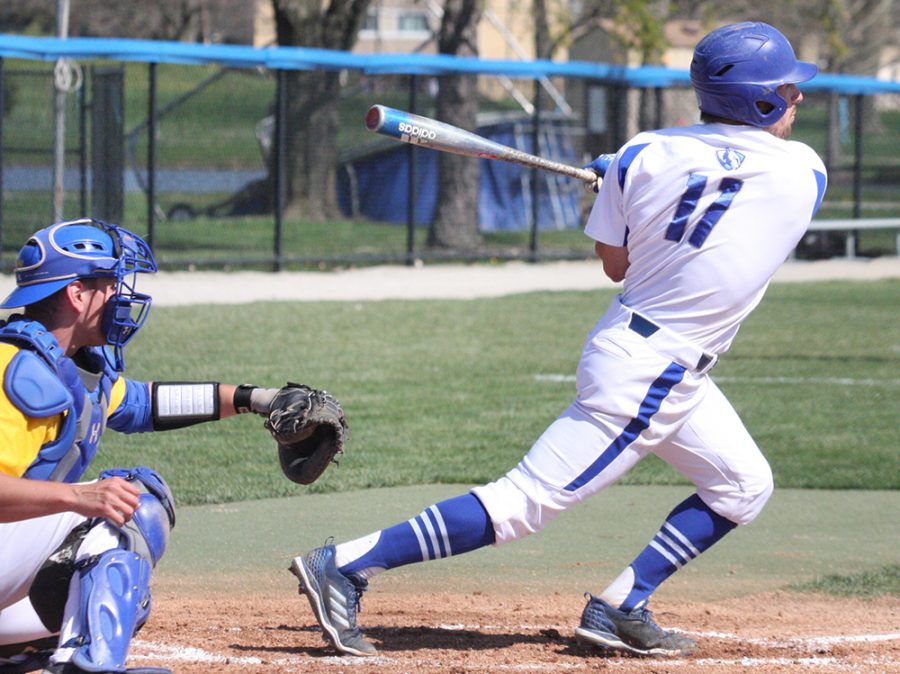 Eastern senior Jimmy Govern connects with a pitch in a game last season at Coaches Field. Eastern is 3-7 this season.

Eastern (3-7) had two doubleheaders against Southern University (6-5), one Friday and one Saturday, and took wins in the second games of each, 4-2 and 6-1.

The new offense that head coach Jason Anderson implemented in the offseason has produced good numbers thus far, and over the weekend, the Panthers averaged 5.25 runs per game.

Complementing the offense was the pitching staff, which has seemed to settle in as the young season goes along.

Leading the pitching staff over the weekend, and during the season thus far, is Spenser Dexter.

Dexter is 1-0, grabbing his first save of the season Saturday, and he has had three straight great outings.

Against top-25 Arkansas in the third game of the season-opening series, Dexter went four innings and gave up three hits, one run and struck out two batters.

In his next appearance, an 8-1 win over Western Kentucky, he went 8.1 innings, nearing a complete game shutout, before giving up one earned run in the bottom of the ninth.

Dexter only gave up four hits and struck out seven batters in the Western Kentucky game.

In the second game of Saturday’s doubleheader, Dexter pitched the final five innings of the game and only gave up three hits, one earned run and struck out nine batters.

His performances against Western Kentucky and Southern University earned him the OVC Pitcher of the Week honors Monday.

Foster Anshutz got his first win of the season, pitching the four innings before Dexter came in, only allowing two hits and no runs.

Complementing the pitching staff in the two wins, though, was the offense.

Hunter Morris led the Eastern offense in Saturday’s win, going 2-for-4 from the plate and batting in two RBIs.

Jimmy Govern started the scoring for Eastern by reaching home on a throwing error.

Morris brought in the only other run Eastern truly needed in the second inning, singling through the right side of the infield and bringing Tarron Lawson home.

In Eastern’s win Friday, 4-2, Garyn Stewart was the hero who scored the deciding run for the win.

Stewart batted 1-for-3 in the game, with his one hit being a three-run home run to left field in the second inning. His home run also scored Ryan Knernschield and Matt Mackey.

Mackey went on to add an insurance run in the next inning, hitting a double down the left field line that scored Christian Pena.

Carson Haws got the start in Friday’s win, pitching 4.2 innings and giving up two earned runs on four hits and three walks.

Will Klein pitched the final out of the game to earn his first save of the season.

Eastern was scheduled for a game Tuesday at Evansville, but weather conditions cancelled that matchup.

With that game out of the way, the Panthers now face their OVC opening series sooner; Eastern will travel to Alabama to take on Jacksonville State in a three-game series.

The Gamecocks are 5-7 so far this season.