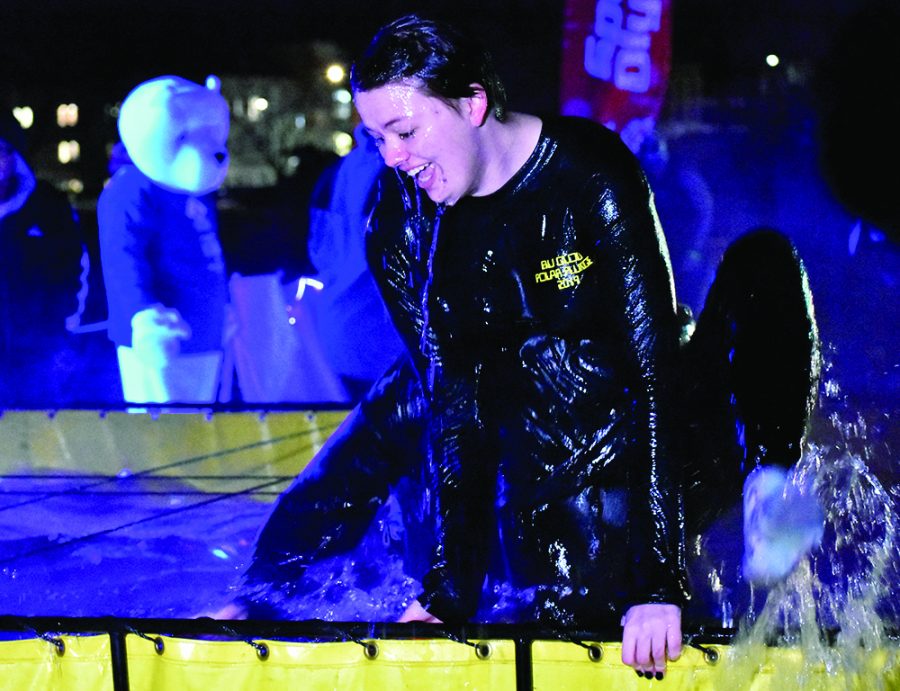 Raine Zhu | The Daily Eastern News Laura Renken, an elementary education major, pulls herself out of the “Plunge Pool” Sunday night during Eastern’s Polar Plunge near the Campus Pond. Students and other participants were “freezing for a reason” as they jumped into the 3-foot deep pool filled with cold water.

Students and alumni got a chance to submerge themselves in frigid water on a wintry Sunday night near the campus pond for Eastern’s Polar Plunge.

This year was the first one to be glow-themed, which meant participants would jump into a pool lit with black lights, rather than the pond itself, with glow sticks also illuminating the scene as part of the “glow in the dark” theme.

As is Polar Plunge tradition, incentive to participate was the opportunity to raise money for a charitable cause – specifically the Special Olympics.

Participants got to raise money to fund the Illinois Special Olympics Region I.

According to the Region I page on the Special Olympics Illinois website, the region includes Champaign, Coles, DeWitt, Effingham, Shelby and 12 other counties.

“(I chose to participate) because I am an active member of the Best Buddies organization,” Bogdonic said, “And Special Olympics is something that a lot of the buddies do, so I’d like to support them.”

According to their RSO page on Eastern’s website, the group is a “global volunteer movement that creates opportunities for one-to-one friendships.”

Duncan said Dawson Boys, the top individual fundraiser, raised the most money with $1,275 in donations.

She also said the top team of fundraisers was the EIU Special Education Department, which raised a total of $4,621.

The fundraising will continue through March 9 and the team that raises the most money will be awarded a $1,000 scholarship.

The second-place team will receive a $500 scholarship.

Teams that took part in plunging included the Alpha Sig Alpha sorority, the “Boys Boys Team,” a parents and alumni team and a few other teams that came to plunge.

The winners will be announced via the 2019 EIU Glow Polar Plunge Facebook page on Saturday.